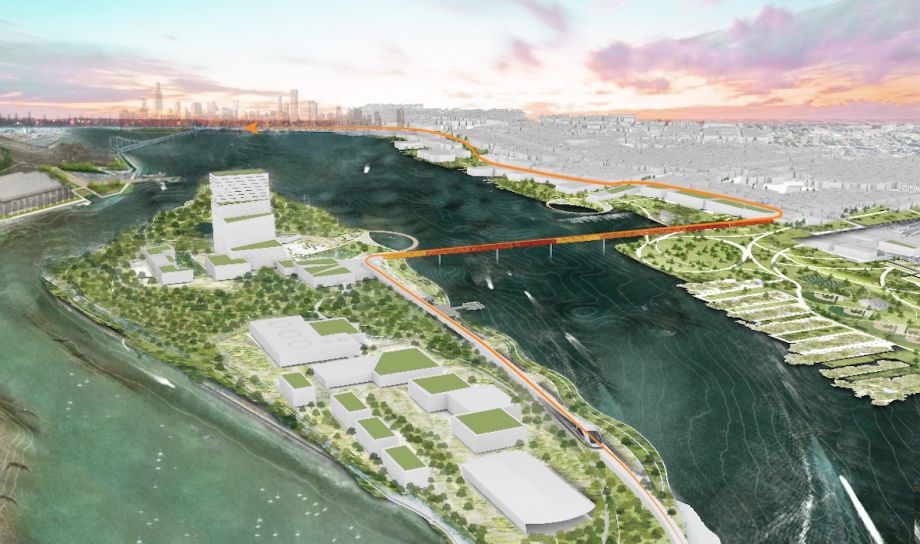 A winning design proposal envisions a thriving future for an uninhabited Philly island.

Can an obscure, uninhabited, 292-acre island that sits in the Delaware River between Philadelphia and Camden be knitted into the urban fabric of those cities? One team of designers recently concocted a long-term development plan that would take rural cues — and also considers challenges such as food insecurity and rising sea levels — to do just that. Their plan includes a sky farm, a farmers’ market and ag education facilities.

The group won the annual Better Philadelphia Challenge, which is presented by the Philadelphia Center for Architecture and open to university-level students. The competition looks for a solution to an actual urban-design issue in Philadelphia, with the hope that the resulting ideas could be applied to other cities. This year, applicants were asked to imagine ways to develop Petty Island, which most Philadelphians aren’t even aware exists but which claims a colorful history.

William Penn once owned it. Lore has Blackbeard docking his ship on it. During the second half of the19th century, an Irish immigrant managed a farm there and eventually declared himself king of the island. In 1902, promoters envisioned it as the site of an amusement park. In contrast, during the last century, Petty Island’s tale has featured mainly drab refineries, petroleum tanks and cargo containers, but in recent years, it’s been the object of several ambitious development plans. For example, a 2004 proposal would have seen the island host a hotel/resort complex and conference center, a golf course, retail space and 750 upscale homes. Environmentalists who fight such development have pointed to two bald eagles that call the island home. In 2009, current owner Citgo announced that it will donate the island to New Jersey’s Natural Lands Trust.

With a complex history at the baseline, the challenge even upped the level of difficulty by requiring entrants to project a full century into the future. Robert Hanifin, a member of the winning team from Cornell University, chuckled when he mentioned this requirement. “One-hundred year plans don’t exist,” he said wryly.

Nonetheless, Hanifin and his teammates Akshali Gandhi, Li-Yu Pan, Chen Sun and Lishutong Zhang — all master degree candidates in either landscape architecture or regional planning — came up with a thoughtful vision for both short-term and long-term development of the island and the facing Philadelphia waterfront, with a focus on addressing issues of food insecurity, urban farming and agricultural education. The Greater Philadelphia Coalition Against Hunger estimates that in 2013, 22 percent of city residents experienced food insecurity.

The team’s winning multiphase proposal, dubbed “Delaware Valley Foodworx,” includes an agricultural college, seed bank, sky farm, discovery center and farmers’ market on the island. “The sky farm will be a lab but also the site of actual production,” Pan pointed out. “We looked at the vertical farming that already exists in the world,” but they also took into consideration future rising sea levels.

The Cornell-based team’s plan upgrades the Philadelphia riverfront with food distribution warehouses, a marina and recreational fields. “We’re making a general assumption that the urban core of Philadelphia is going to continue to grow,” Hanifin said. “That’s crucial for this plan. We’re going to be providing food to those people and the educational resources for those people to partake in urban agriculture.”

Barry Seymour, executive director of the Delaware Valley Regional Planning Commission and a judge for the Better Philadelphia Challenge, said the Cornell team’s plan “resonated with the jury because they really tried to identify a specific need for the region and how Petty Island could fit in to that. They looked at the region and came up with solutions to address the problem of food insecurity.”

Seymour points out how many of the plan’s elements, like the farmers’ market, serve both Philadelphia and Camden, thereby turning Petty Island into a connector between the two cities.

In the real world, there won’t be a food-production center, or much of anything else, on Petty Island anytime soon. “Environmental cleanup has to happen before anything can go there,” said the DVRPC’s Seymour. But competitions such as this are exercises in dreaming big. Who wouldn’t want to see a 10-story sky farm on an island off of Philadelphia?