Cleaning Up Litter in Philly, One Mouse Click at a Time – Next City

Cleaning Up Litter in Philly, One Mouse Click at a Time 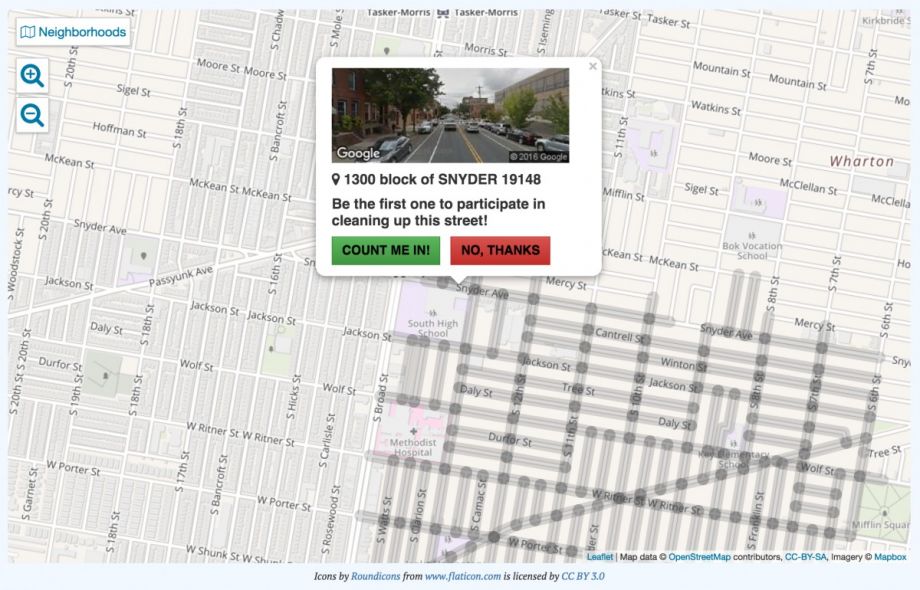 (Credit: Not in Philly)

How easy is it to keep a city block clean? According to West Philadelphia resident Dave Brindley, it’s very easy: “With a quality grabber, it took me 15 minutes,” he says of how long it took him to pick up all the litter on his block twice a week.

How easy is it to get a city block’s residents to commit to keeping their stretch clean? Thanks to a new website developed by Brindley and coder Yury Korzun, all it takes is a mouse click on a map.

“Litter is an issue new and longtime Philadelphians hate and feel powerless over, but I did not think that needed to be the case,” Brindley says. The problem has not gone unnoticed by officials. Mayor Jim Kenney this week signed an order to create a Zero Waste and Litter Cabinet, with the goal of having a much cleaner city by 2035.

And while there are certainly effective block captains, or that one dynamo on a street who has seemingly endless energy to lure people out with brooms and bags, Brindley says scalability is tough. “Existing programs require a lot of central staffing to coordinate schedules and supplies,” he says. “A city program needs employees to advertise, collect member information and update official coverage maps.”

His site, “Not in Philly,” meanwhile takes care of the difficult part of setting up “adopt-a-block” programs, namely, organizing the adopters and motivating them to get out there. It puts all of this in the hands of the residents themselves.

A clickable map shows which blocks in an area have cleanup crews and which do not. The map divides the city into its various neighborhoods; all residents have to do is click on their block, then respond to a prompt in order to express interest in cleaning it up.

“We believe this to be the first map-enabled adopt-a-block site in the country,” says Brindley. “No other site or city has their blocks segmented and selectable.”

Like the block cleanups themselves, Not in Philly is a volunteer effort. Korzun, who moved to Philadelphia one year ago, got involved when he met Brindley at a Code for Philly meetup shortly after he moved here. “I wanted to apply my skills and learn how to create tools for community engagement,” he says.

That meetup was also Brindley’s first. Litter has been on his mind ever since he moved to West Philadelphia’s Walnut Hill section seven years ago: “[I had] a young child and another on the way. Our block had many other children, and I hated the hopelessness that trash-strewn streets conveyed to them.” So he became a one-man block cleanup crew, going out twice a week with his grabber.

He may have been alone on his block, but he was not alone in his concern about litter. “After a community meeting where litter was mentioned as a top concern, I started to think through the outline of a web-enabled adopt-a-block program,” he says.

That’s where Korzun comes in. His experience up until then had consisted of developing back-end systems for corporate clients, and the litter-fighting website Brindley discussed with him would become his first public-facing project. The two soon rounded up other Code for Philly volunteers to help them, and with crucial assistance from Think Brownstone, a website and software design firm, and funding support from the Pennsylvania Resource Council, an environmental nonprofit, Not in Philly went live in October.

“We had very limited resources, and people worked in their spare time, but thanks to volunteers, we were able to put everything together and successfully launch the website,” Korzun says.

Not in Philly asks residents who agree to clean up their blocks to make a six-month commitment to picking up litter once a week. In exchange for the commitment, the resident gets a grabber and the opportunity to win gift cards from local businesses when they post pictures of their clean blocks to Instagram.

Right now, the program is fully activated in Walnut Hill, where adopted blocks appear in green on the map and blocks awaiting adoption show up in gray.

“So far, more than 100 people have signed up across the city, including a Temple student who is forming a student chapter in a neighborhood where students are rarely known for adding value to their community,” Brindley says.

He sees this technology as a potentially powerful tool for citizens to take control of solving their own communities’ problems.

“We called the project ‘Not in Philly’ because we want citizens to feel ownership of the issue,” he says. “We see that since this site needs minimal staffing, it could easily be copied by other cities and used for any problem that could be solved on a block-by-block basis, including advocacy work, speaking door to door to neighbors about community services, the city having a 311 point person for each block, or passing out smoke detectors.

Brindley is currently in the process of obtaining funding that will allow the program to expand beyond Walnut Hill with supplies in exchange for pledges. “There has already been interest from Lancaster, Pennsylvania, in using our program and open source code to address litter,” he says. “Once the second round of funding is acquired, we will expand to other neighborhoods in West Philadelphia and then the city as a whole.”