Philly Gets a Stunning Remake for City Hall’s Front Yard 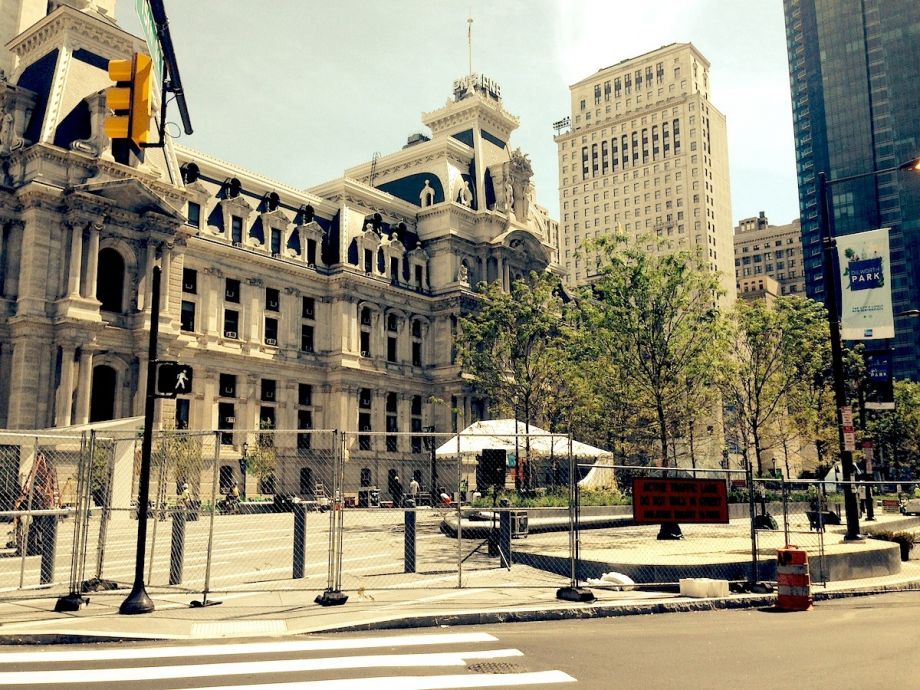 On September 4th, Philadelphians will inaugurate the new Dilworth Park, a reimagined space surrounding City Hall, complete with a sweeping lawn, a cafe, fountains, public art and a new entrance to the city’s busiest transit hub. But the park, which was conceived by and ultimately leased to a local economic development agency, also represents one of the largest public-private partnerships undertaken in Philadelphia to date. Along with the sheer scale and immense cost of the redesign, the new Dilworth Park raises questions about the increasing role of quasi-government non-profits in the revitalization of American cities and the meaning of public space.

The once-grim plaza owes its transformation to a grand vision — and over a decade of work along with $55 million — on the part of CEO Paul Levy and his Center City District (CCD), an economic development non-profit created in the 1950s to channel public and private dollars into improving a then- beleaguered downtown. Dilworth will be leased to the CCD for 20 years (with an option to extend for an additional 10 years), serving as the crown jewel in a string of park transformations orchestrated by the non-profit and aimed at reviving Philadelphia’s Ben Franklin Parkway, a Gilded Age boulevard long-criticized as too staid and auto-centered to fulfill its intended purpose as a bustling cultural corridor.

“The city is partnering with us to get public spaces improved beyond what the city can do on its own,” says Levy. “We are agreeing to take on security, maintenance and other expenses … It’s a win-win situation.”

Nineteen different musical acts on multiple stages will turn the ribbon-cutting into an all-day spectacle, courtesy of Comcast, whose skyline-topping headquarters is two blocks away. (Despite the grand opening celebration, Dilworth Park, which is $5 million over budget, won’t technically be done until Thanksgiving. )

A front-end loader scoops up remnants of the Occupy Philadelphia encampment at City Hall in 2011. (AP Photo/Matt Rourke)

Since its unintentionally dramatic groundbreaking in early 2012, the project has generated a certain level of controversy. Construction started nearly three years ago after municipal bulldozers cleared the old plaza of garbage, ragged tents and plywood — the remains of the Occupy Philadelphia encampment. The voluntary relocation of protestors to an adjacent public square made way for the CCD’s renovations, but the city used the interruption to impose restrictions on the Occupy group’s demonstration permit at the new location. Their activities were limited to business hours and the encampment fizzled out just as the Dilworth Park project geared up.

Now, the closest public space to City Hall will be leased for decades by the CCD as a provision of the public-private partnership that spawned the redevelopment project — raising concerns about the privatization of public space. Although the CCD’s project, planned years earlier, was hardly to blame for the group’s displacement, the move remains a poignant memory for the erstwhile protestors. One former Occupy organizer says there had been chatter online about reoccupying the new plaza, although no official protests have been planned. Intentionally or not, the CCD’s outsized opening-day festivities would likely hamper any would-be demonstrators.

Levy notes that lease agreements are common with CCD projects (which also include a child-centered park and a cafe along the Parkway). He says evidence of “site control” was often a prerequisite to fundraising; donors want to know that an organization will be able to commit to long-term improvements.

“All … are public parks that have been leased to us,” says Levy. “They are public parks open to the public but you have an entity that is taking over management and programming. It’s a fairly typical public-private partnership that exists across the country.”

Indeed, from the Central Park Conservancy, a non-profit that covers 90 percent of maintenance and improvement costs at America’s most iconic urban park, to Chicago’s wildly successful Millennium Park, a $475 million project that saw half its cost borne by private donors, similar partnerships are increasingly common nationwide.

Levy was unequivocal in addressing fears that CCD’s control over the park would somehow affect the public aspect of the new park. “Any application for public demonstration will be handled by the city,” he said. “There will be no difference between [Dilworth] and any other public place.”

Mary Roper, from the local branch of the ACLU, echoes Levy saying her group had “no reason” to think the CCD misunderstood First Amendment rights, and expected “there will be some protesters who want to test that early on.” However, civil rights attorney Larry Krasner, who represented several Occupy protestors in court battles related to the long-running protests, says that while he appreciates Levy’s comments, he wonders if the city itself could use the CCD agreement (or its planned programming) as a pretext to keep demonstrators out of the park.

“Ultimately none of this is [Levy’s] call, it’s about what government permits and doesn’t permit,” said Krasner. “We need to be extremely careful of anything that government does that could be used as an excuse to prevent critics of the government from speaking out too close to government itself.”

SEPTA, Philadelphia’s primary public transit agency, was also party to the reconstruction of the plaza — City Hall sits atop bustling subway stations. The CCD’s successful application for a $15 million federal TIGER transportation grant to support the project raised eyebrows in 2010 — some sources at the time said local transit agency SEPTA viewed such grants as “their” territory, not an upstart non-profit’s. SEPTA had submitted a competing bid to fund a new fare payment system and was passed over in favor of CCD’s proposal.

However, Levy now describes SEPTA as a “complete partner” on the project, saying they had committed to “$10 million to $12 million” worth of their own improvements to the aging stations.

“I would say that overall I am extremely impressed with both the design and philosophy behind Dilworth Park,” says Devin Turner, of the Delaware Valley Association of Rail Passengers. “SEPTA and the City tend to ignore transit aesthetics, particularly in regards to our non-regional rail services, which can often scare off choice riders from SEPTA.”

Turner praises the CCD’s public-private partnership as a means of supplementing ever-limited transit dollars caused by Pennsylvania legislators who are “rural in mindset.”

“If you look at some of the most effective transit concourses in the Americas, such as those of Toronto, Chicago or Montreal, their vitality and importance is driven partially by government investment and focus, but mainly by a significant buy-in by the private sector to invest and utilize the asset to the fullest extent.”

The benefits of such partnerships are clear. But some critics say their worries are less about private management of public areas resulting in some dystopic suppression of free speech, and more about a creeping sanitization of urban space. Where “improvements” end and a kind of urban theme park begin to emerge is a line that is still fuzzy — and meanwhile the bureaucratic obstacles that necessitate such partnerships remain unaddressed.

“I think there is a trend of analogizing public space to shopping malls,” Krasner says. “I think a lot of people view that as a sad state of affairs because it seems to indicate that government is insufficiently funded or not able to provide services we used to take for granted.”