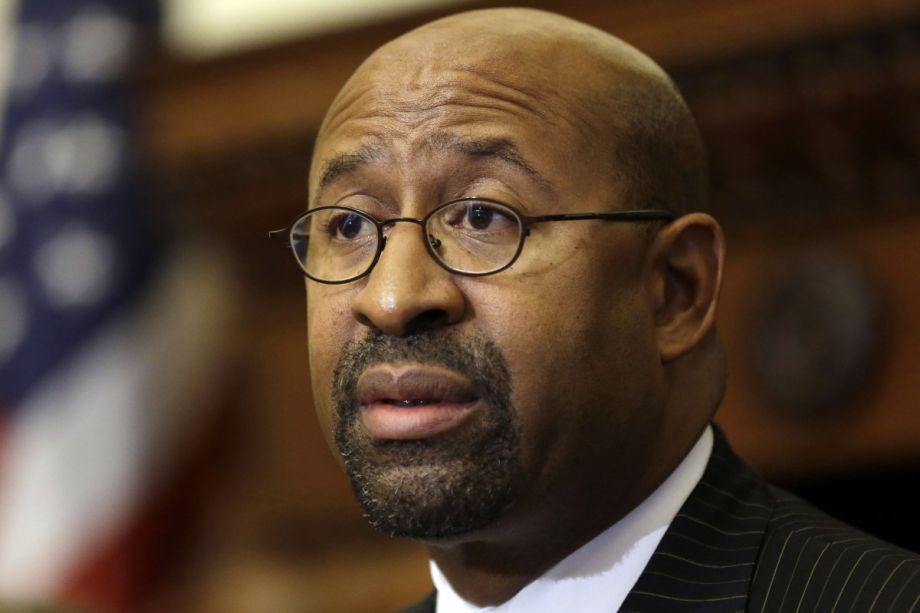 In rather striking contrast with Pittsburgh and other big U.S. cities that have finally begun facing up to the role their auto-oriented planning and policy choices play in the climate challenge, Nutter’s Philadelphia is noteworthy for how little reckoning has taken place, particularly on City Council, and how ineffective policy “carrots” alone are at reducing car use.

To be sure, the City of Brotherly Love has been witnessing very impressive growth in the number of new residents arriving without cars since 2009. But car usage rates have been dropping quite slowly according to a new progress report from Nutter’s Greenworks initiative — a project of the Mayor’s Office of Sustainability he created to fulfill his promise — and since 2011, they actually started moving in the wrong direction. 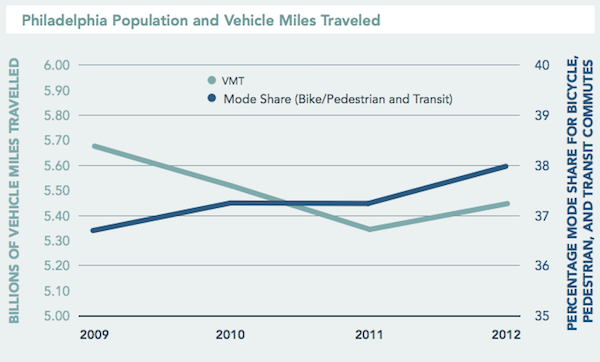 The situation is actually worse than this chart makes it look.

For starters, as any connoisseur of statistical trickery will tell you, the y-axis always needs to start at 0, otherwise the chart is going to over-dramatize the trend.

The skewed chart helpfully zooms in on how a third of Philadelphia’s progress in cutting vehicle miles traveled (VMT) disappeared in the course of a year, but it obscures another important point: Despite the fact that transportation accounts for about 18 percent of the city’s emissions, the Nutter administration never had an especially ambitious VMT reduction goal: 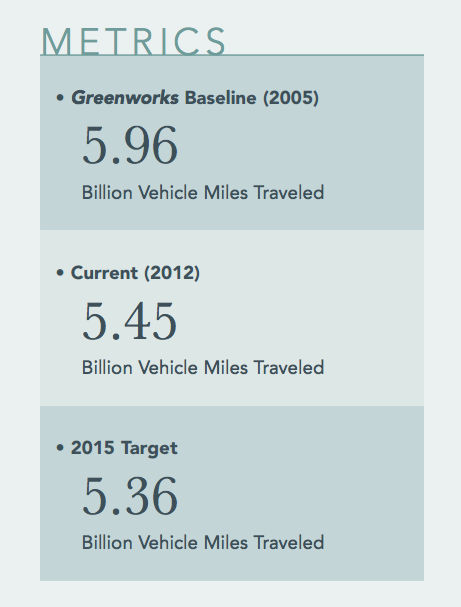 The year 2005 turns out to have been a poor choice for the baseline year, because that was the year VMT peaked nationally: 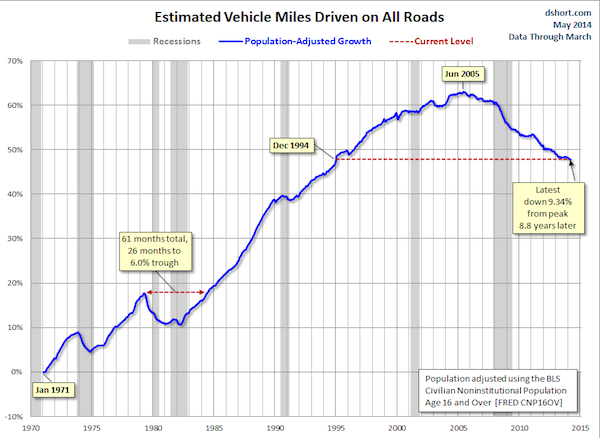 This trend was already observable when Nutter took office, though in fairness, the national decline in driving was still widely presumed to be a product of the economic downturn. Now that we know better, the 2005 baseline seems like a curiously low difficulty setting for Greenworks to be using, and the fact that Philly won’t even hit its lame 2015 target seems sadder.

Adjusting the goals and choosing a more reasonable year to judge Philadelphia’s efforts against than the all-time peak VMT year would entail some minor political embarrassment, but is there any doubt that’s what the real Greenest City in America would do?

Unfortunately, the story city government seems to be comforting itself with is that “as a result” of economic and population growth, driving is increasing — nevermind that PIRG has found no correlation between VMT and employment, and other cities like Pittsburgh and Vancouver have shown that growth and driving rates can move in opposite directions.

Over on the other side of Pennsylvania, Pittsburgh has been a national leader in cutting VMT while enjoying a substantially stronger economic recovery than Philadelphia and most of the nation, and Vancouver has overseen traffic declines of 20 percent on its major streets, even as its population has grown 4.5 percent since 2006.

The difference is policy. While Philadelphia has employed carrots like bike parking, bike lanes and (limited) pedestrian safety infrastructure to tempt people out of their cars, Sarah Wu, the policy and outreach manager of the Mayor’s Office of Sustainability, admits city policy has largely avoided sticks to discourage driving.

“Within the administration’s purview, we work closely with the Mayor’s Office on Transportation and Utilities (MOTU), trying to make it easier for folks who want to get out of their cars,” she says. “We have a lot more bike parking than we had before — we need more, the posts are all really full — but we’re working on putting in more bike lanes, and working on pedestrian safety.”

The Nutter administration’s gains on bike-ped infrastructure are significant compared to the pre-Nutter status quo, and the increases in biking and walking shouldn’t be diminished. But there’s no getting around it: The impact has been weak in the face of Philadelphia’s impressive universe of car subsidies.

Residential curb parking permits are hilariously low at $35 a year for the first car, $50 for the second, $75 for the third, and $100 for each additional car. You could rent all eight parking spaces on your block for $820 a year!

Despite having a vastly better public transit system to nudge car commuters onto, Philly’s parking tax on garages and surface lots is half the rate of Pittsburgh’s. And on the whole, the city’s tax blend is heavy on wage, business and building taxes, and light on land taxes — perversely favoring surface parking uses on expensive central land with good transit connections.

And while Pittsburgh, under the leadership of urbanist Mayor Bill Peduto, has been hiking its parking rates and moving toward variable rates for metered parking (a goal, shared by Nutter’s Greenworks plan, that Wu says is “not technologically or politically possible in the near future”), Philadelphia has been stuck with politically divined low meter prices.

“When we moved from meters to kiosks, we tried to make it so you have 80 percent occupancy on the curb, so there’s less circling,” Wu says. “We’re cognizant of parking prices. We want to charge more when demand’s higher, to have 20 percent vacancy.”

But while the Mayor’s office has been talking since 2009 about parking meter prices that nudge drivers planning to park for “longer than an hour or two” into a garage, City Council has set the maximum Center City and University City rates at $2.50 an hour.

According to an analysis I did using market data from BestParking.com, at the current rates it takes about five hours to nudge drivers off the curb in Center City — more than double the Nutter administration’s stated goal. 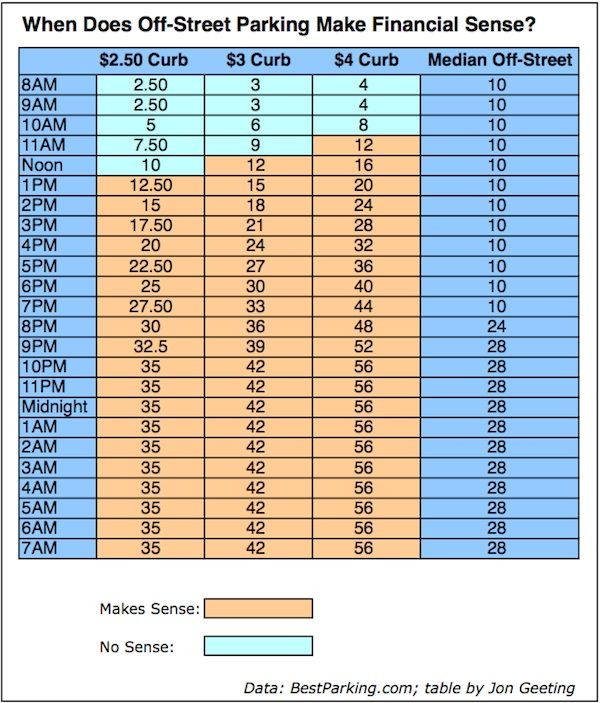 City Council currently has the authority to raise rates up to $3 an hour, which would come a bit closer to achieving the administration’s goal, but there’s no appetite on Council for raising more revenue from parking, despite the city’s serious fiscal woes. And meter rates are still 50 cents an hour outside of Center City, where they haven’t budged for 20 years.

“Part of it is fighting a culture that is near and dear to Americans — their right to drive by themselves, when they want, as far as they want,” says Joseph Minott, executive director of the Clean Air Council. “Even in a progressive city like Philadelphia, with a progressive mayor like Nutter, we still cater to the car at the expense of alternative forms of transportation.”

Minott grants that part of the problem stems from city economic development policies, like encouraging businesses to locate in areas like the Navy Yard, which has poor transit connections, or tax policies that exacerbate job sprawl. It certainly doesn’t help that about 36 percent of Philadelphians leave the city every morning to work in the suburbs.

Still, part of the problem is just regular old politics.

“Knowing Mayor Nutter pretty well, he is in his heart a sustainability person,” says Minott. “I do think that City Council has been a little bit slower in getting past some of the narrow interests and supporting broader interests.”

The District Council members in particular, who enjoy exclusive informal control over land use matters in their districts, from bike lanes to zoning issues, have been an important obstacle to the proliferation of car-free housing marketed toward the growing car-free population, and to trading car-oriented street space for bike lanes and pedestrian plazas.

Mandatory parking requirements were largely eliminated for new single family homes and for mixed-use and apartment buildings with fewer than four units in the 2012 zoning overhaul, but Council members fought to retain on-site parking requirements for medium-to-large multi-family buildings — precisely the sort of housing that the car-free millennials and baby boomers driving Philly’s recent population growth are most likely to want.

Philadelphia Council’s sustainability politics never really caught up to Mayor Nutter during his two terms, and now with the lame-duck administration’s political capital spent down to nothing, it’s not clear who will take responsibility for these VMT numbers. How and when will Philadelphia get back on track to achieve this goal?