A New Model for Art World Collaboration In Philadelphia 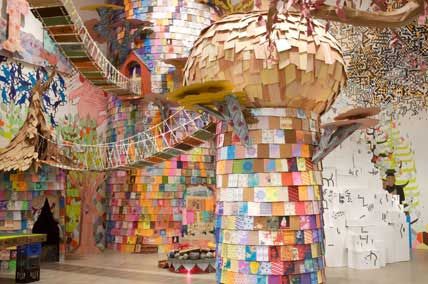 This November, a collection of artist-run galleries across Philadelphia will join forces on a new mode of collaborative exhibition they are calling CITYWIDE. The idea is deceptively simple: Instead of competing with one another, participating galleries will partner with one another to swap art or collaborate on an exhibition. The end goal is expanded audiences for everyone as galleries get a chance to show their work in new locations, to new audiences across the city.

“I would describe it as a body-swap comedy—in which two people (or beings) exchange minds and end up in each other’s bodies, only with galleries, idea, and groups of people instead of individual people swapping,” said Annette Monnier, whose Callowhill gallery Practice gallery is one the 26 participating. Practice will be swapping its work with” Mount Airy Contemporary Artists Space (MACAS).

Sculptor and video artist Christopher McManus, who initiated the one-month collective exhibition, has experience doing similar art swaps at his gallery, Vox Populi. The gallery exchanges artwork with other spaces – often in other cities. This time, he’s looking locally with a mission to strengthen the city’s sometimes diffuse art scene.

“We wanted to focus on Philadelphia and unify its art scene,” McManus said.

In addition to the art exhibitions, CITYWIDE will host panel discussion, some of which will feature gallery members and alumni discussing the evolution of their space. In total, 26 galleries will participate though others may be included in one-day events.

This exhibition was partially made possible by a $13,000 Philadelphia Knight Arts Challenge Grant from the Knight Foundation. But it also will depend on support from other donors —CITYWIDE will only receive the Knight grant if the project is able to attract matching funding from other donors.

Lindsay Chandler, co-founder of the Kensington art space, Fjord, which contains eight studios and a gallery, will be swapping with the fantastically named, Tiger Strikes Asteroid, in Callowhill. She is also in charge of CITYWIDE’s marketing and fundraising and sees this it as a great way for galleries to get recognition.

“The Knight Foundation grant was very important,” Chandler said, “but individual donations are going to be necessary too.”

Sometime this summer, the CITYWIDE website will be updated to allow donations. In the meantime, those looking to donate can do so through CITYWIDE and the galleries themselves.

Tiger Strikes Asteroid, like CITYWIDE, is a collaborative effort. It has nine artists, each of whom takes control of the exhibitions one month each year. Director Anne Schaefer sees CITYWIDE as a huge opportunity.

“Artist-run galleries provide a unique perspective on what makes art,” Shaefer said. “This is an opportunity to showcase many more artists in Philadelphia and showcase what’s going on now.”