Health Professor Turns to Space for Malaria Cure – Next City 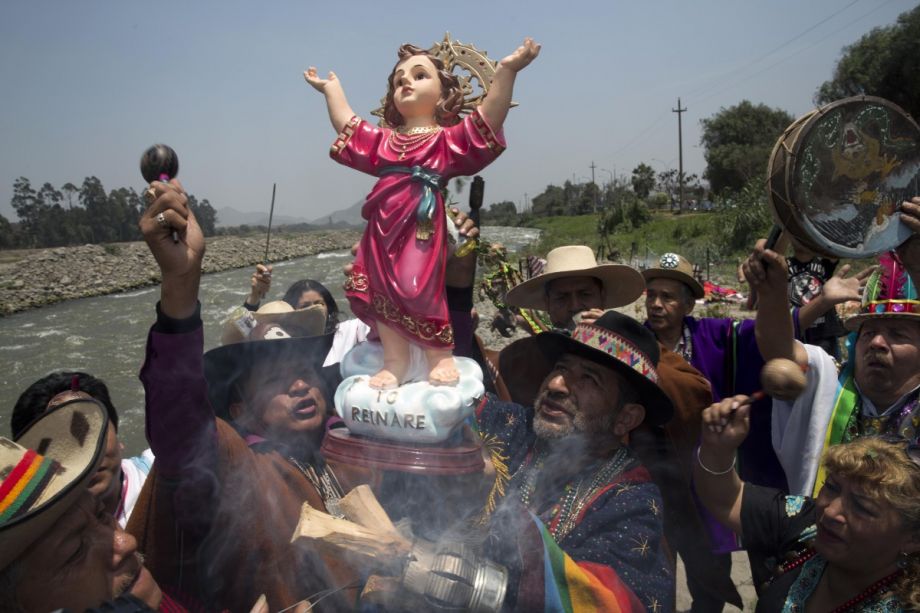 Shamans outside Lima, Peru, hold up a statue of baby Jesus, or “El Nino” in Spanish, during a ritual asking for protection from El Niño. (AP Photo/Martin Mejia)

The Amazon sounds like an exotic place — home to uncontacted tribal peoples and ancient rainforests, the last of a vast wilderness that once covered much of South America. But in truth, the area is urbanizing at a rapid pace. In Peru, a nation whose eastern provinces overlay the Amazon, development has come at a price. It has wiped malaria control off the map. In 2012, a flood of historic proportions in the Peruvian Amazon, caused by climate change and worsened by development, eliminated control of the mosquito-borne disease — and it has never been regained. “Since 2012, malaria has been out of control and the current system is no longer working,” says William Pan, a global health professor at Duke University.

What might bring back epidemic control is not a reversal of urban development, but rather the deployment of a distant form of help: space technology. Pan has just received a three-year, million-dollar grant from U.S. National Air and Space Administration (NASA) to develop an early warning system for malaria in Peru using data from satellites.

The distance between cutting-edge global positioning systems and the inhabitants of squatter settlements in the fast-growing city of Pucallpa, Peru, seems vast. Yet, space exploration agencies have become crucial to the health of some of the world’s poorest urban workers.

Pan’s project will build on a massive initiative in the global health sector to control malaria worldwide. Bolstered by Bill Gates’ bold goal to fully eradicate malaria, the effort has included careful monitoring, plus pesticide spraying and distribution of bed nets to inhibit the spread of the mosquitoes that spread the disease. The work has paid off. Gates Foundation data shows that the number of new infections dropped by one-quarter in the decade between 2000 and 2010, while malaria deaths have been cut nearly in half. In South America, the Pan American Health Organization has documented a more impressive decline — from 1.2 million new cases in 2000 to just 375,000 in 2014, a drop of 67 percent, plus a 77 percent reduction in deaths.

But circumstances have put an end to the South American success story. After the 2012 flood, which left 191,000 people temporarily homeless or living in damaged dwellings, inundated the Brazilian town of Manaus, and killed 60 people in Bolivia, reversing the rise in infections hasn’t been easy to achieve.

Pan’s project will aim to fix that by integrating what Pan calls a “very rudimentary” system of reporting the malaria cases diagnosed at regional health centers with satellite images mapping nascent, unreported outbreaks.

“Our early warning system incorporates this kind of time-trend of cases that are known,” Pan explains, “and then we can estimate, in a current week, where we think a lot of cases are occurring … and the estimated future cases that are supposed to be reported by the health system but have not been reported yet.”

The early warning system does this by augmenting the existing reporting system with data on weather, rainfall and temperature. It also can map risks by location using a feature of the Amazon: Since the area is naturally a nearly impenetrable jungle, settlements reduce land covers. Therefore, satellite images that show differences in foliage density effectively map where people live. “As you change biomass — the canopy of the forest — and you are replacing that with crops, you actually are creating areas where vectors can spread malaria,” Pan says. “The mosquitos actually prefer edges of the forest, or they prefer living in human-occupied areas.” Knowing those locations means knowing where outbreaks are likely to strike.

“When they distribute bed nets or do indoor residual [pesticide] spraying, they know where to put those resources to best stop the transmission of malaria,” Pan says. The predictive elements in the model will also allow a quick turnaround, eliminating a two-week reporting time lag that formerly allowed malaria to spread through communities before health officials could show up.

Will the model work amid increasing climate change? The overall question has met with some skepticism. The uses of space technology for environment monitoring has been occurring since the 1990s, but some scientists have debated the strength of current models. University of Southern California professor Julien Emile-Geay recently published a study revising climate modeling inaccuracies with data derived from 10,000-year-old fossils.

More prosaic observations have noted that the 2012 Amazon flood was one of the many aberrations now appearing in the destabilized global climate. It was the third flood in three years in a river system previously thought to flood only once per decade.

Worse, this year’s El Niño, the uncommon hot-weather pattern that climate activist organization 350.org says is effectively speeding up global warming by at least a decade, may further complicate the data. During the 1997-98 El Niño, the area Pan studies experienced 10 times the normal level of rainfall — which triggered the kind of severe flooding linked to outbreaks of malaria and other mosquito- and water-borne infectious diseases.

Although the mathematical challenge of predictive modeling is formidable amid the tumult, Pan says those risks are one reason bolstering local health system data is important.

“These things don’t change the patterns that people see on a month-by-month basis,” Pan says. “But if they are put at a level where there is more flooding, it increases the burden to deal with all sorts of diseases. And if you do that, some programs, even if they are very strong, can collapse. And that is what we saw with the 2012 flood.”