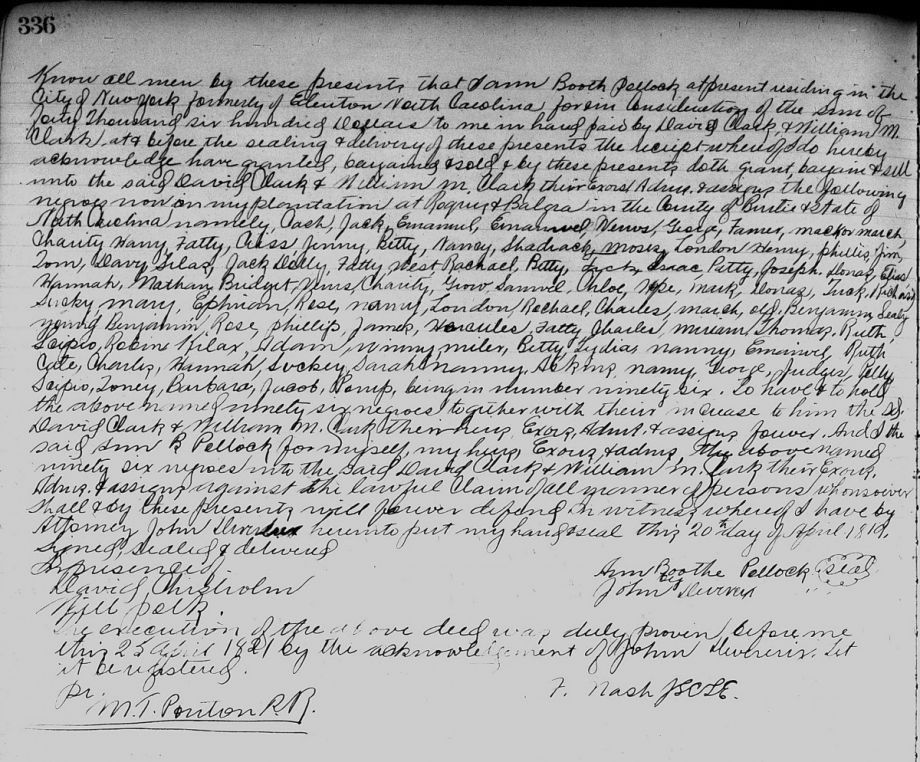 Deeds like this one, recording the sale of 98 human beings in 1819, are rarely digitized, but a project based out of Greensboro, North Carolina, is aiming to change that. (Image courtesy People Not Property)

Editor’s note: Next City is covering solutions and challenges in Greensboro ahead of hosting our 2020 Vanguard Conference in the city. Applications are now open.

When Deshawn Elam started college at North Carolina Agricultural and Technical State University , an Historically Black College (HBCU) in Greensboro, N.C., he thought he would become a history teacher.

But life changed his plans.

One of his first classes introduced Elam to digital archiving.

“I’ve always been someone who’s interested in seeing actual history, like having it in my hands,” Elam says. “So, I was always fascinated with trying to preserve that history and trying to hold it physically.”

Digitizing historic documents enables Elam to do that. And, through his work with the People Not Property project at the University of North Carolina-Greensboro (UNCG), Elam is helping bring to light the human impact of U.S. slavery.

“Slave deeds,” documents testifying to the sale of enslaved people, were stored in county Register of Deeds offices. One of the first people who began digitizing these records and making them public was Drew Reisinger, the Register of Deeds for Buncombe County, North Carolina. The Buncombe County’s registry office has documents dating to the 1700s, and it has approximately 300 slave deeds.

Now, Elam, 20 and still an undergraduate, is working with archivists at UNCG to digitize slave deeds from 26 North Carolina counties so they can be included in the Digital Library on American Slavery. That library was created in the mid-aughts beginning with the personal archives of a retired professor.

One of the stories that Elam has unearthed with his research is that of Ann Booth Pollock, who sold all 98 of the enslaved people she owned on the Roquist and Balgra plantations for $40,600 to William M. Clark and David S. Clark on April 20, 1819. A later deed shows that the Clarks subsequently divided the enslaved people between them.

The work on the People Not Property project is a source of pride for his family, Elam says. He grew up with two older siblings outside of Charlotte, NC and is the first person in his family to attend college. After growing up as an African-American in a predominantly white community, Elam says studying at an HBCU takes on greater significance. “There’s so much, like, history here, as far as civil rights and like black history,” Elam says of NCAT and Greensboro. “It helps me stay focused … on trying to get these stories out and trying to study history,” he says.

While Elam has deep motivation for the digitizing work, findings like the Pollock deed can lead to historical trauma, says Claire Heckel, who coordinates the People Not Property project. Historical trauma is the cumulative impact on a person or group of people of an experience or event. Dr. Joy DeGruy described Post-Traumatic Slave Syndrome in her 2005 book. She argued that the dehumanization of slavery was the initial trauma, while a racial hierarchy has continued to affect the prospects of dark-skinned people.

Elam acknowledges that he sometimes struggles with what he finds in these documents. “It’s really tough. It’s really hard to see. They’re literally equating black lives to property. And you still see that in society nowadays. It makes me feel hurt.”

Funds to support the project have come from the National Historic Public Records Commission, which provided roughly $300,000 over a period of three years, and the Andrew W. Mellon Foundation, which is supporting the creation of digital maps. The People Not Property project also takes advantage of the North Carolina Humanities Corridor, which supports inter-institutional collaborations, such as bringing students from UNCAT, UNCG and North Carolina Central to work on the archive.

UNCG librarian Richard Cox has been at the forefront of the project to digitize slave deeds. “We’ve been able to pull things like skill sets people may have had,” says Cox. He says that the digitizing and transcription process has enabled researchers to see more of “who these people were as people with rounded lives.”

Heckel says this specificity has important consequences. “A big part of what made the mentality of slavery possible was dehumanizing African-Americans. A lot of the discussions around slavery that students get in high school especially, are very vague and generalized. We kind of have nameless slave people and nameless slaveholders. So, this step towards restoring individuality and humanity is a very important process.”

The number of deeds in each county varies dramatically. One participating county in the western part of the state, Cox notes, only had one deed. David Gwynn, an associate professor at UNCG, says there were thousands of deeds in counties on the eastern end of the state.

“There was a bigger concentration of slaveholding in the eastern, coastal counties, which is where all the large-scale plantations were located,” Gwynn says. Additionally, the port was located there, and enslaved people arrived there from Africa.

While Elam is gaining skills as a digital archivist, the project will also develop classroom materials for teachers. The project aims to create maps and lesson plans similar to those available through the Trans-Atlantic Slave Trade Database at Emory University. Additionally, the plan includes mobile exhibits tailored to the communities served by the local libraries and Register of Deeds offices where the exhibit will be set up. Those exhibits will show families with different relationships to slavery: slaveholders, enslaved people, abolitionists, and families with mixed status. This, Cox says, allows modern people to put their families into an historical context while also looking more closely at enslaved people themselves.

The deeds could also enable people to identify family members and so are an important tool for genealogical research, often a challenge for African-Americans. October Kamara, 20, is a senior at UNCG and says this project can help provide some missing links. “If you know you have family in New York or family in Georgia, it’s really hard to access that, and going across [the] country to track down your family isn’t something that everyone can do,” Kamara says.

EDITOR’S NOTE: This article originally misspelled Buncombe County. The error has been corrected.