People Are King on Toronto’s King Street, For Now – Next City

People Are King on Toronto’s King Street, For Now 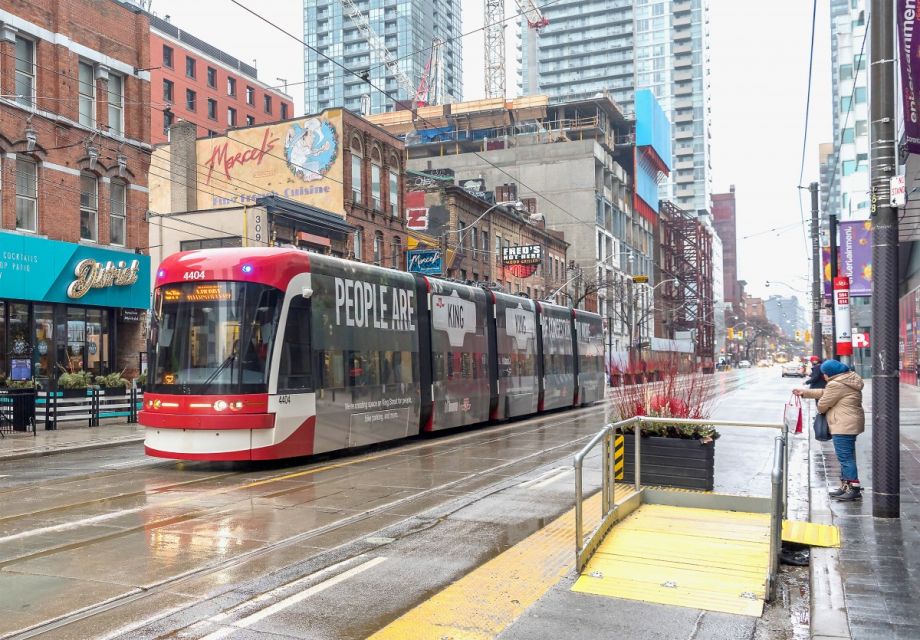 Emboldened by slogans such as King of Congestion No More, the Toronto Transit Commission (TTC) launched the King Street Transit Pilot project last November as a way to transform the street car line along one of the city’s busiest corridors into a smoother, more dependable service. But faced with record low temperatures and intense opposition from a small number of businesses which generated extensive media coverage, the early days of this program were anything but smooth.

The 12-month initiative was designed by the Toronto Transit Commission to address a longstanding problem of congestion on a street used daily by 65,000 street car riders and 20,000 drivers. Congestion got so bad that, at times, it was a toss up for commuters between using public transit or choosing to walk because of cars clogging up the transit lanes. In response, the King Street pilot program eliminates vehicular through traffic along King Street, limiting cars to little more than a block to make drop offs or pick ups before exiting the street, prohibiting left hand turns and eliminating parking spots altogether.

The initial wave of protests before the pilot was even launched came from the Toronto Taxi Alliance, generating newspaper headlines such as ‘Treat Taxis Like the TTC.’ In response to pressure from the cab community, city council made a partial concession, allowing taxis to conduct business as usual along King Street between the hours of 10 p.m. and 5 a.m.

The second wave of protests came from a small number outspoken business owners along King Street not long after the project got underway. They called for the initiative to be scrapped, with such stories as “Toronto’s King Street Pilot is Killing Business” dominating the headlines. Much of the opposition came from the Ontario Restaurant Hotel and Motel Association, including one restaurant owner who grabbed front page news in several papers, by erecting an ice sculpture in front of his establishment that consisted of a hand with the middle finger raised in defiance of the city and the TTC.

But in February, just when it appeared that pressure from outspoken businesses might convince city officials to kill the project, pro-transit supporters pushed back, forming the King For All Coalition. Comprising over 20 groups, including several resident associations, TTCriders (a citizen’s group for transit riders), and a handful of local non-profit organizations, King For All supported city efforts to see the 12-month project through to completion, to accurately determine whether the initiative was in fact achieving the established goal of improving transit.

“I think we need to stay true to the pilot for the whole year so the city can get a complete picture of such criteria as reliability, ridership experience, safety and of course the impact on local business,” says Amanda O’Rourke, executive director of 8 80 Cities, one of the nonprofit members of the King For All Coalition.

O’Rourke, whose organization advocates for enhanced mobility and public space, says citizens, including business owners, need to adjust to the new dynamic on the street before jumping to any conclusions. “Some people are saying the street is quiet. It’s quiet, because there are fewer cars. But that doesn’t mean it’s less vibrant,” O’Rourke argues. “The reality is there will always be an adjustment period for projects like this.”

The city is also doing its part to manage public expectations, including producing monthly progress reports with detailed statistics on the King Street pilot’s impact. The most current numbers reveal that while transit times haven’t noticeably changed, transit reliability has improved significantly, with fewer delays and 85 percent of street cars arriving on average every four minutes during the morning commute. Transit ridership has also increased dramatically by more than 25 percent, averaging 2,892 passengers per hour compared to 2,047 before the pilot was launched, representing an average daily jump from 65,000 to over 80,000. And retail sales along King Street are consistent with what they have been in recent years during the winter months, despite claims by some businesses the project would be a financial disaster.

Barbara Gray, general manager overseeing the King Street Transit Pilot at the Toronto Transit Commission, attributes some of the early negative business and media response to a perfect storm, literally. “It was so cold in December and January and we certainly saw the effects of that,” she says. Effects included live shows being cancelled on dates with record or near record low temperatures and, with cancellations, reduced bookings in nearby restaurants.

Apart from the cold, O’Rourke says the city “may have underestimated the placemaking component and the opportunity to make King Street really vibrant in the winter. We see cities in Scandinavia doing a really good job of this, bringing heaters out on patios. So, I think the city can learn from this and be more adaptable.”

Gray says that due to the complexity of the project, city officials opted to focus on logistics during the early going. “We needed to get such things as signal timings worked out and advance times for pedestrians crossing the street. We also needed to make sure there was enough space for right hand turning vehicles as well as space for (temporary) parking and deliveries.”

Before the end of April, the city is expected to announce the results of the Everyone is King Design Build competition, which will lead to the creation of temporary parklets and public art, designed to draw increased pedestrian traffic to the street and support local businesses.

The competition has drawn about 80 submissions, coming from everyone from university students to local designers and architectural firms. “I’m excited to see what happens with that as well as the public response,” O’Rourke says. “It’s a really important part of the project we haven’t seen yet.”