Passing the Planning Mic to the Next Generation, Today – Next City

Passing the Planning Mic to the Next Generation, Today 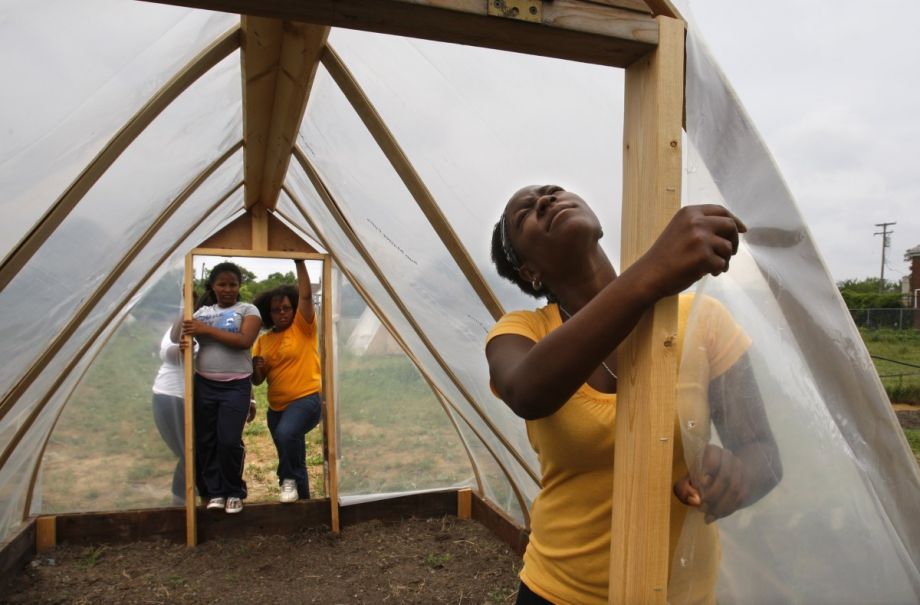 In this 2010 file photo, Ashley Rodgers, Tiffini Baldwin, Bryanna Douglas, and Adrinne Minter look over a greenhouse in the backyard of the Catherine Ferguson Academy in Detroit. The Detroit school, which serves pregnant and parenting teens, includes gardening and farming in its science curriculum. The teens learn the fundamentals of gardening and farming through hands-on training. (AP Photo/Carlos Osorio)

Anyone who’s sat in on a so-called community engagement meeting can describe the fatigue that sets in.

While city leaders and developers use these meetings as a tool for informing development, residents and activists who attend these sessions often complain that they’re merely a meeting for the sake of having a meeting. In other words, what’s the point?

In Detroit, a city whose neighborhoods and residents have suffered decades of disinvestment, officials are taking a different approach in the Warrendale-Cody Rouge area, home to the largest concentration of children in the city, for guidance on how to lead redevelopment for the next generation. They won’t be holding boring meetings that lead to nowhere. This time, they’re turning to those children for guidance.

The city has hired Hector, a New Jersey-based urban design, planning and civic arts studio led by Damon Rich and Jae Shin — an Enterprise Rose Architectural Fellow at the New York City Housing Authority. The firm will develop the framework needed so that youth can guide how they interact with their environment — from infancy to adolescence.

“We’re getting the voice of youth and using that voice to shape the neighborhood,” says Dave Walker, design director for the city’s west region and manager of the Warrendale-Cody Rouge planning effort

What that means so far is the Hector group has plans to have kids draw maps of the city and play games to reveal how they get to local parks and where their parents go for groceries nearby. The participating children will be grouped by age, from infant to high school.

Hector and others have been taking and learning from this approach in other cities across the country.

In diverse immigrant neighborhoods of South Philly, for example, Hector’s Rich — who last year received a MacArthur Foundation “genius grant” — led a group of teens in a federally-funded summer employment program to research the future of the century-plus-old Mifflin Square Park.

The area surrounding the park is home to a myriad of immigrants and people of color, including Cambodians, Bhutanese, Latinx and African American. Neither residents or city leaders could come to a consensus on what exactly to do with the park. The result of that youth-led investigation was the creation of the Park Powers exhibition, which featured large-scale drawings in which the youths were tasked with illustrating what the park looks like now and what they envision it could be.

The Southeast Asian Mutual Assistance Associations Coalition was one of the partners that brought Rich to work in Philadelphia, and, with a grant from the William Penn Foundation, the organization is now leading a group of organizations on a community plan for the park.

Meanwhile, in Brooklyn, N.Y., the teen-led Red Hook Initiative was able to secure funding for a skate park by gathering signatures of support and surveying the area before deciding on the Harold Ickes Playground as its future home.

Detroit has already been expanding on community-leadership within parts of its planning ecosystem. Since 2016, the city has been developing its Strategic Neighborhood Fund, a partnership with J.P. Morgan Chase and foundations aimed at reinvigorating development in neighborhoods outside of the core downtown and Midtown areas, which have experienced tremendous redevelopment in recent years. So far, the fund has focused its efforts in Southwest Detroit, the Villages on the east side, Livernois-Six Mile and the Fitzgerald neighborhood, to name a few.

Elsewhere in Detroit, efforts such as the West Riverfront Park initiative included sending residents to visit riverfront parks across the country so they could get a glimpse at what other waterfront parks look like and use that information to inform the future of the currently under-utilized waterfront property.

For Warrendale-Cody Rouge, child-centered design is intentionally going beyond the obvious when it comes to youth — reforming the beleaguered local public education system. The Detroit Public Schools Community District is the worst-performing district in the nation and recently had shut off its drinking water because it has tested positive for high levels of lead and copper.

Rather, the goal for Warrendale-Cody Rouge is to look at the neighborhood’s built environment, be it parks, sidewalks, housing, streetlights or mobility — in particular, looking at the built environment surrounding Cody High School. Does an expectant mother have easy access to prenatal care? Are the sidewalks properly paved or are they pockmarked by cracks? What kind of food can kids access in the area? Researchers are now looking more deeply into whether built environment factors like these can affect student performance.

“It would be great to see an 8 or 9-year-old to say ‘hey, wouldn’t be more fun to have this in the park and and then to be able to come back years later and see it become a reality,” Walker says.