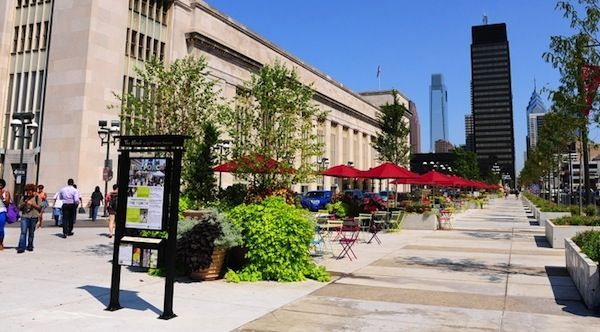 It’s an unlikely beginning for a prominent investor in public space development, but Philadelphia’s University City District (UCD) was born out of tragedy: The murder of a University of Pennsylvania graduate student.

That crime, and the many others like it in the area around the university, spurred Penn along with two peer anchor institutions west of the Schuylkill River — Drexel University and the Children’s Hospital of Philadelphia — to come together. For the first time, a group conversation began about making the area a safer, healthier place. The group created a set of concrete economic development initiatives and formed a non-profit that acts like business improvement district.

Now, 16 years later, the area where that murder took place has changed dramatically — for the better, the institutions would contend.

UCD’s Matt Bergheiser laid this history out for a group of about 18 attendees at the Reclaiming Vacant Properties conference in a session called “Partnering With Academic Anchor Institutions to Revitalize Communities.” He went through a PowerPoint presentation that explained how UCD, an organization once focused almost exclusively on public safety, is now best known for placing colorful cafe chairs in parks and minting street fair-style celebrations where organic popsicles go for a dollar a piece. The transformation from dour security guard to enthusiastic party thrower has come as a result of collaboration, and an ability to keep out of the way of controversy.

UCD doesn’t own any real estate. “We’re the biggest squatters in Philadelphia, or probably in the entire country,” Bergheiser told the group before they climbed onto a Vegas-style party bus to tour a few of the group’s most successful squats. “We find barren spaces in key spots and turn them into lively spaces.” The end result is a broader community investment wherein private property owners see the benefit of energizing previously underused space and UCD can avoid sticky conflicts over profit, politics and gentrification.

After all, as other UCD staffers reminded attendees, the non-profit’s central mission is still keeping the district clean and safe, and marketing the hell out of it.

The key, Bergheiser pointed out, is creating partnerships with other entities that will not only allow use of a property or swath of land, but which will become equally invested in the vibrancy of an area.

One of the best examples of UCD’s ability to create a skein of connections is The Porch, a once-nude, unused space outside of the city’s central train station at 30th Street. More than 350,000 people pass through the station every day. For many of them, as they emerge into the sunlight from their Amtrak ride, it’s the first glimpse they’ll have of Philadelphia.

Now the blank canvas they would have seen is filled with life — flowers and plants in huge repurposed planters; tables and chairs and umbrellas; street musicians; a University City District employee with a dustpan and broom. The Porch required numerous groups to come together: Amtrak, the Pennsylvania Department of Transportation, the Southeastern Pennsylvania Transportation Authority and the District, which itself is composed of several partner organizations. Bergheiser said turning that into “a lively, sociable green space” exemplifies the “flexibility and entrepreneurism” an organization like UCD needs to employ to get things accomplished. (It also helps if you tell the city that a project is temporary.)

UCD’s public spaces aren’t just about spiffing things up or making attractive space available to disparate groups. They are intended to bridge divides between populations, too. The relatively new Drexel Park was once another unused, dull spot that divided campus from neighborhood. Now it’s a green expanse where recreational programming brings audiences that include Drexel students as well as neighborhood residents who have no affiliation with the university.