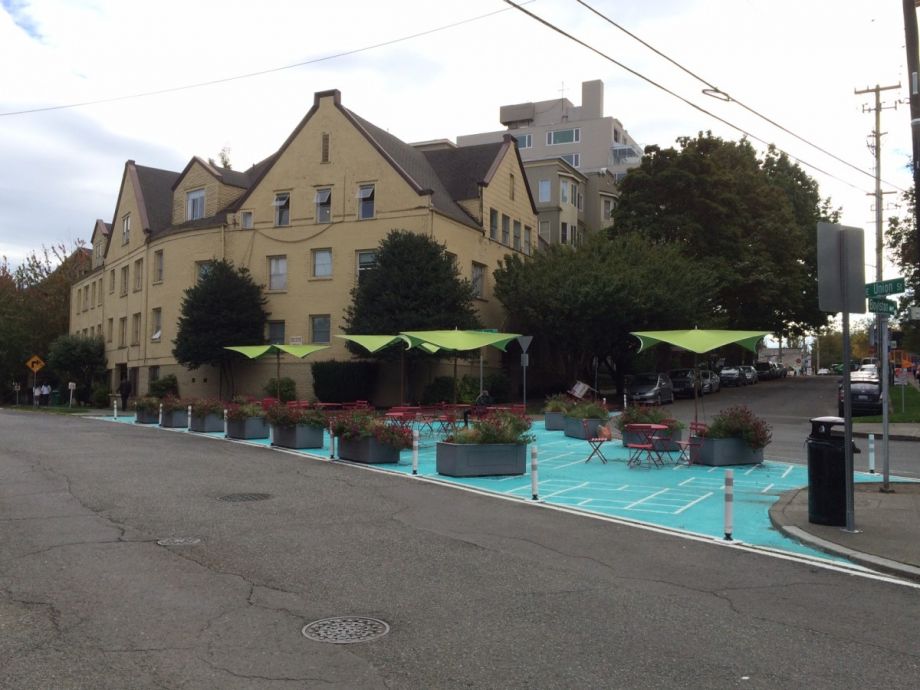 Another Park(ing) Day has come and gone. On Friday, people in cities around the world converted hundreds, perhaps even thousands, of parking spots into pop-up mini parks in a one-day celebration of reclaiming public space. In Seattle, more than 50 parklets set up shop under appropriately gray September skies, offering people everything from chicken coop demonstrations to temporary protected bike lanes to yoga.

Park(ing) Day started in San Francisco in 2005 when a design firm converted a single parallel parking spot into a park with grass, a bench and a potted tree. Their experiment lasted two hours, the maximum time limit of the parking spot. Word spread fast and it eventually gave rise to the sanctioned, global event that now takes place every third Friday in September. It also gave rise to permanent mini-parks called parklets. Here in Seattle, there are now eight permanent parklets and another dozen being planned.

To that I say, meh. Park(ing) Day’s pop-up installations are a clever form of tactical urbanism that theoretically remind people that streets are public pace. Parklets as a permanent installation are a waste of time and money.

To be clear, I’m not coming at this from the NIMBY camp that decries the loss of parking and hand wrings about the type of people who might sit there. Parklets are certainly a far better use of public space than parking (and god forbid cities provide homeless people the dignity of a comfortable spot to sit). But better than a parking spot isn’t the same thing as good. Parklets are a mediocre use of urbanists’ limited political capital that, in their current form, don’t do enough to improve our streets. It’s telling that most of the Park(ing) Day parks look nothing like parklets.

In Seattle, the parklet program is anchored by private businesses. A store or restaurant opts to trade a parallel parking space in front of their business for a parklet. They pay for all the design, construction and maintenance along with permitting fees and an annual $3,000 charge to supplement lost parking revenue.

This has the serious benefit of not costing the city any money, but the serious drawback of parklets pretty much only getting installed on arterials.

All but two of Seattle’s existing parklets sit on busy streets. In my experience, parklets are not enough of an imposing presence to actually have a calming effect.

If given the choice to sit within inches of fast-moving cars and their emissions and the choice to sit anywhere else, I’m going to take the latter. Seattle parklets get used, but I’m guessing I’m not alone in my desire to find respite in my park experience, not the din of traffic.

The public-private approach to Seattle’s parklets also has a diminishing effect on the public-ness of the space. Some of the parklets are considered “streateries” and are only open to the public when the restaurants are closed. Many of the others just feel like they’re only for patrons of the businesses they sit in front of. Perhaps it’s fair that the parklet paid for by and in front of the ice cream shop is used primarily by their customers, but a semi-public use of public space is only semi-better than private car parking.

With all that said, I would love to see more parklets modeled after Seattle’s latest example. Opened in August, the new First Hill “pavement park” isn’t technically a parklet. But it’s a tiny park built in a former street right-of-way, so it is definitely in the vein. More importantly, it’s a fantastic use of public space that both improves safety and the neighborhood.

The park is built in an awkward three-way intersection where the corner of two angled streets connect with a third. It created an awkward, elongated X space between the three streets. The intersection was an extraneous cut-through that allowed drivers to fly through an area with bad sight lines. The Department of Transportation threw up some barriers and planters on either side of the intersection, painted the ground Smurf blue, and installed some metal tables and chairs. In doing so they made the intersection safer for people and provided a much-needed public open space in a neighborhood that’s seriously lacking parks.

So far it’s been a huge hit. The park happens to be right near my girlfriend’s apartment, which has given me ample opportunity to both experience the park firsthand and observe it as I walk by. From the time it opened until recently when the weather took a turn for wet, there were people hanging out in the parklet nearly every afternoon and evening.

One sunny afternoon, I posted up there with the dog and a book while I waited for my girlfriend to get home. When I arrived, there was already a couple chatting at one table. While I sat and read, two women came down to the park with their after-work glasses of wine. Another man later sat down at a fourth table to read the paper. That sort of communal space sharing is an urbanist dream, and one I haven’t seen to nearly the same extent in the parklets and streateries around town.

The First Hill pavement park works for a number of reasons. One, it’s residential and on residential streets. First Hill is a very urban neighborhood, but the park is surrounded on all sides by big apartment buildings. Union is a fairly busy street, but far less so than the arterials on which Seattle’s other parklets sit. Two, it meets a demand. There are only a handful of public open spaces in the neighborhood and, sitting just east of Downtown, there is essentially no space available for acquisition to build bigger parks.

Perhaps your city is some urbanist utopia void of NIMBYs, but in Seattle every placemaking project is met with significant resistance. Advocates need to rally the base, energy is spent and capital is burnt in order to get anything done. That energy would be better spent on projects with more payoff than parklets. I realize pitting projects against each other is a slippery slope toward the sort of political “realism” that allows cities to maintain the status quo. But I would much rather see advocates and city departments spending their political chips on protected bike lanes, safer pedestrian crossings, green stormwater infrastructure, improvements to existing parks or more pavement parks like the one they just built on First Hill before building another semi-public business patio.