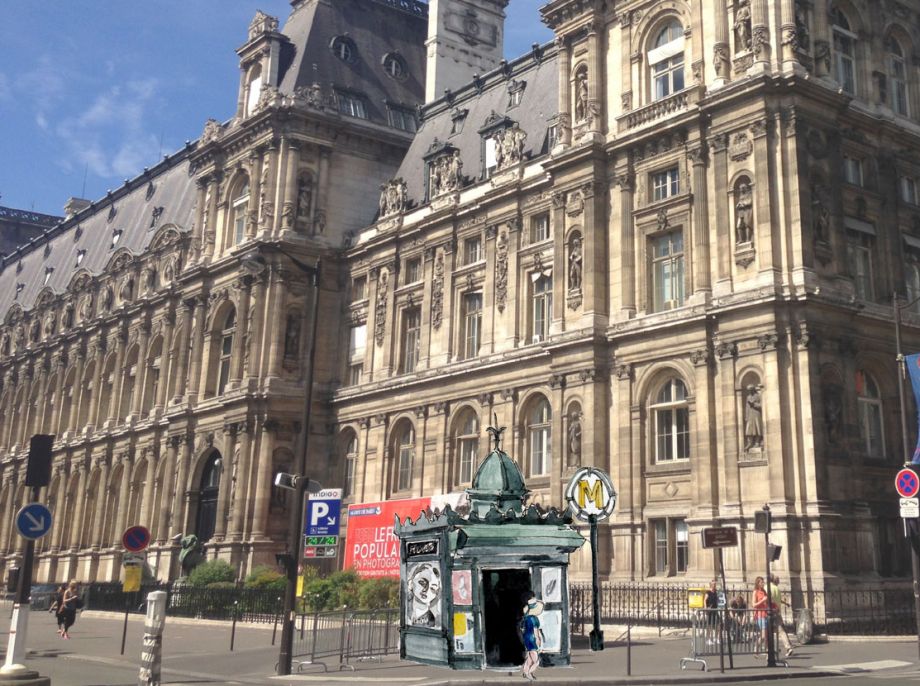 More than 43,000 people have signed the petition defending Paris’ classic news kiosks, which it calls “guardians of the spirit of Paris of days past.”

The newsstands, dark green and topped with a dome, are threatened not just by the decline of print media around the world, but by the city of Paris itself. Threatened with replacement.

Mayor Anne Hidalgo’s administration has proposed swapping all 400 or so kiosks on the streets of Paris with a newer, sleeker model.

The city argues its more modern design will, in theory, attract younger customers and also allow kiosk operators to diversify their offerings by including elements like a built-in refrigerator. More appealing displays, the argument goes, would sell more papers.

But since an initial draft was unveiled in May, the new design has been compared in the French press to sardine cans and photocopiers.

“I think there is an element to the new design that risks being a little futurist,” says Jean-Patrick Esteve. The 66-year-old former lawyer turned news vendor says the modern design “risks becoming obsolete before too long.”

Paris’ news stalls are owned by the city but operated under contract by advertising firm JCDecaux, which in turn rents the stalls to vendors like Esteve. The company is holding a series of meetings with the city over the design and potential modifications but Hidalgo recently reiterated on television that the final design will be “innovative.”

If you linger at Esteve’s stall at the Place du Trocadero, you’ll notice that many of his customers are graying, particularly those stopping in for a newspaper.

“There is a general loss of interest among French people in reading the daily press,” he observes.

It’s a particularly distressing trend in the deeply literary French culture. In addition to gossip magazines and glossy style magazines, French kiosks also carry paperback editions of the writings of Marx and other famous philosophers published by the major newspaper Le Monde, and copies of the monthly Philosophie.

But Esteve, who supplements news sales with a revolving racks of souvenirs and postcards, doesn’t think the city’s suggested design has any advantage over the current one.

Paris’ iconic news kiosk was created amid a massive reconstruction of the city carried out by Baron George-Eugene Haussmann in the mid-19th century for Napoleon III. Way before the catchphrase “complete streets” became trendy, Haussmann held that the urban streetscape should be designed as a whole, with infrastructure for wheeled vehicles and for pedestrians.

“He wanted a unity, a coherence,” Michel Carmona explained recently, as we drank espresso at one of the sidewalk tables of the café beside Esteve’s newsstand. Carmona, who was once chair of urban planning at the Sorbonne, had brought along a copy of his book, Haussmann: His Life and Times, and the Making of Modern Paris.

Haussman, he said, assigned the design of standard street furniture to architect Gabriel Davioud, who created not just the kiosks but the benches and fountains lining the wide avenues Haussman had cut through the city.

“The city of Paris is very attached to its image,” Carmona said.

Haussmann has fallen in and out of favor in France but for the last several decades has been central to that image. The outcomes of Corbusian megaprojects and urban clearance in the post-war decades has made Parisians wary of change for change’s sake.

When I speak to one of Esteve’s customers, her description of herself captures this sentiment: “I’m a bit of a ‘past-ist,’” she says.

Carmona, who isn’t the strict traditionalist you might expect of a historian, is a bit more measured. He appreciates modernization, but he’s not convinced of the usefulness of the new design. “Why change just to change?” he asks.

“Believe me, in four years, maximum, there will be no news kiosks left in Paris,” predicts Ben-Youssef. “It’s super sad but for the moment, the ones that are working and what’s working are the ones that sell souvenirs.”

He’s been at it since he was 18, stopping his education after high school so he could bring money home. He’s now 26.

In the intervening years, business has gone “from bad to worse,” he says. So while some of his customers have complained to him that the new kiosk design is reminiscent of the city’s glass recycling bins, he welcomes the effort to do something.

Ben-Youssef ticks his own wish list of changes, likely shared with many a media executive: “The first thing is to stop the free newspapers in the metro. That’s the worst enemy.”

The second item of business, he argues, is for the magazines to revamp their content to re-attract customers. A third: Stop providing entire articles on the Internet, to make people pay for content.

This would all be difficult, he concedes.

And in the shadow of that intimidating list, the hope of a design solution does start to shine a lot brighter.