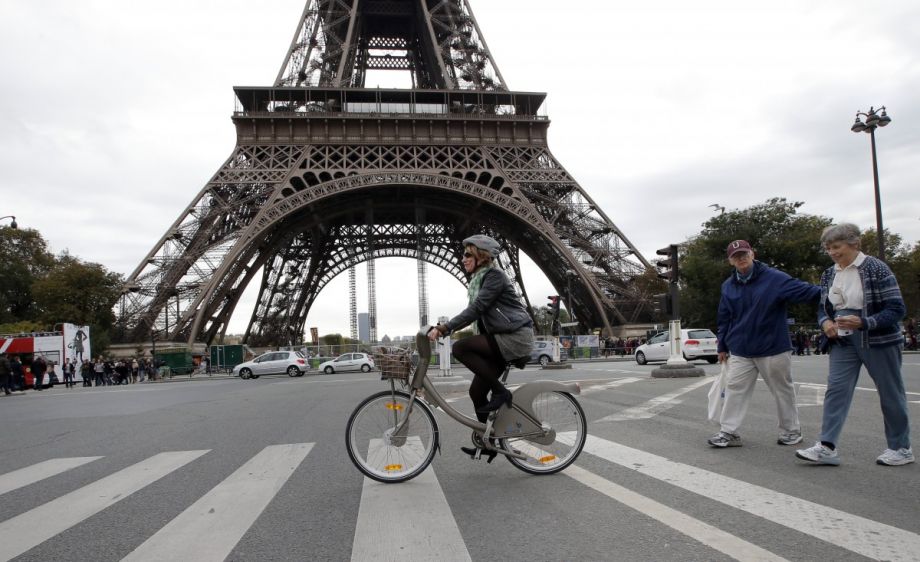 Paris Aims for Car-Free City Center
Putting more steam behind the global push to end auto-centrism, Paris Mayor Anne Hidalgo wants to strictly limit the number of four-wheeled vehicles in the French capital’s historic center, the Age reports. Hidalgo noted that the majority of Parisians don’t even own cars, and told the Journal du Dimanche “in the four central districts, apart from bikes, buses and taxis, the only vehicles allowed will be residents’ cars, delivery vehicles and emergency vehicles.”

With visions of an electric-bike-share program and far less air pollution, the city plans to invest €100 million ($122.8M U.S.) in bike infrastructure and double the number of bike lanes in the next five years.

The Orange County Register’s news story on the opening described the center’s first day of operation as a smooth one, with only a few minor glitches in some of the mechanical equipment.

The $185.2 million facility provides connections for local and intercity buses, Amtrak and Metrolink trains, and taxis. Missing from the picture for now is a planned modern streetcar line that would run from the center past Angel Stadium through the city to Disneyland and the Anaheim Convention Center.

The glass-and-steel domed structure is located in the heart of Anaheim, near the Santa Ana River, the Honda Center and Angel Stadium.

The Register found at least one user who was impressed by the center. Valerie Ashton, who was visiting family in Anaheim from British Columbia, said, “It’s beautiful, the architecture is amazing,” but her relative Keith Shklar bemoaned the lack of a restaurant in the center. (The center’s first food vendor, Mission Market Express, opened later on Saturday.) Among the station’s more interesting amenities are an Anaheim Public Library book vending machine, a filtered water dispenser and a Bitcoin ATM at Mission Market Express.

The modern streetcar line is not yet a sure thing. Anaheim Mayor Tom Tait opposes it, and while the Anaheim City Council voted to authorize the project in 2012, it has not yet given final approval to the planned line.

Nice Airport Light-Rail Line Gets Fully Funded
The last piece of the financing puzzle has been put in place to allow completion of a new light-rail line linking Nice’s city center and harbor with its airport. The International Railway Journal reports that the Nice Côte d’Azur Metropolitan Council has obtained a €250 million ($306.3 million U.S.) loan from the European Investment Bank to complete financing of the streetcar project.

Line T2 of the French resort city’s light-rail network will run 11.3 km from Airport Terminal 2 and Nikaia Administrative Center in the west to Port de Nice in the east via the city center. To minimize construction disruption in the city center and speed travel times, 3.2 km of the line and four of its 20 stations will be in a subway tunnel.

Lima Advances Toward Big Public-Private Partnership Rail Project
Meanwhile, in South America, officials in the Peruvian capital of Lima are continuing to assemble the financing needed to construct that city’s second metro line.

The latest commitment to this project, a 35-year public-private partnership, comes from the Inter-American Development Bank (IDB) in the form of a $750 million loan package. This is on top of a $1.2 billion commitment from the consortium of companies building the line, Consorcio Nuevo Metro de Lima, according to a report in the International Railway Journal.

The Peruvian government’s private investment agency, Proinversión, awarded the contract to finance build, operate and maintain the line to the consortium earlier this year. The consortium is composed of six companies: ACS Dragados and FCC of Spain, Salini Impreglio, AnsaldoBreda and Ansaldo STS of Italy, and Cosapi of Peru. The group will construct a 27.4-km, east-west subway line connecting Ate Vitarte with the city center and Callao on the Pacific coast and an 8-km branch to Jorge Chavez International Airport that will eventually become part of Lima Metro Line 4. The line is expected to carry 604,000 riders each day when it opens in 2020.