Outdoor Midnight Snacking Breaks Down Barriers in a Chinese City 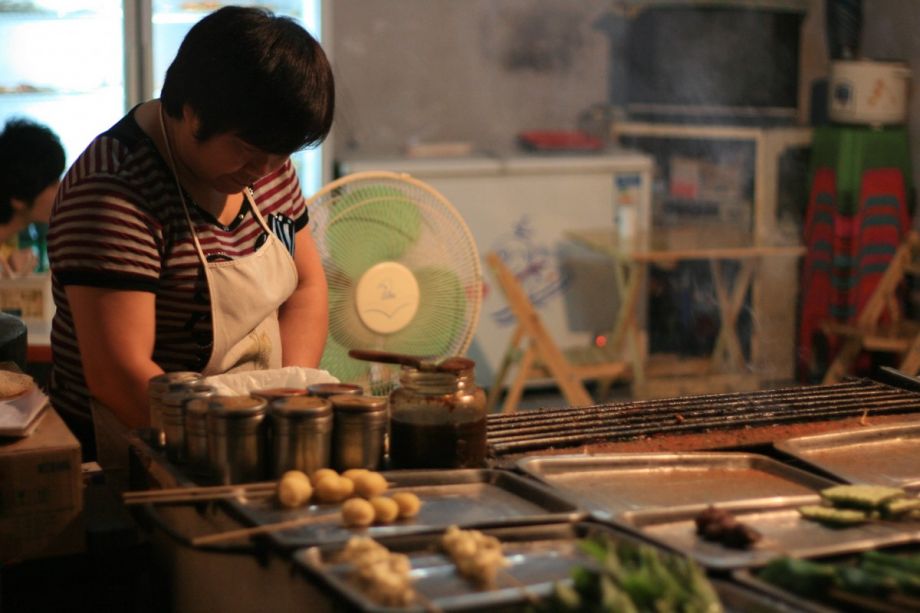 A late-night food vendor in Chengdu.

In a recent interview with Fortune for an article titled “The New Metropolis,” Zappos CEO Tony Hsieh and MeetUp Co-Founder and CEO Scott Heifermann spent much of their time discussing collisions.

“[One] thing you need in a city, that is the cheapest thing to do but also the hardest,” said Hsieh, “is a culture of openness and collaboration and sharing. If people are twice as likely to engage with each other, then maybe you don’t need residential density, and if you live in a city or place where no one talks to each other, then the density doesn’t matter.”

For both men, urban spaces that allow and encourage people to meet in real life are as critical to their business models as the ease with which people can navigate their websites or purchase a product.

“So really,” said Hsieh, “the question is, what’s the culture of the community or the city?”

This question gets to the heart of Chengdu’s current transition from a sleepy provincial capital to a bustling, globalized urban hub deep in China’s interior. In this city, there are two places where people collide and share: teahouses and late-night eateries.

Unlike many Western cities, Chengdu does not strictly enforce regulations concerning late-night food and drink. At around 9 p.m., stalls selling barbecue, fried and boiled noodles, fried rice, and in some cases a full Chinese menu pop up on street corners, in front of alleys and underneath overpasses across the city. The stalls serve customers all night, until the sun rises and all that is left are streets and sidewalks strewn with chicken bones and crumpled greasy napkins. Short plastic tables are covered in beer bottles, and the clean-up crews share space with children heading to school. It’s not pretty, but for Chengdu’s 20 million residents, the after-after-party is an absolute necessity.

Chinese are communal people, but they are also very clannish. This means that although Chinese like to go out in groups, those groups remain separate and isolated. Only on rare occasions do these barriers come down even slightly to facilitate collisions between people who would normally never have otherwise met.

The midnight snack in the alley is one place where strangers in China can collide. The night stalls populate every available space in the city – old and new districts, wealthy and poor – wedged into construction sites and behind government buildings. Class divisions break down over beef skewers and steaming pots of vegetables, as diners crowd shoulder-to-shoulder around the plastic tables that can only seat so many. In fact, the late-night snack is a rite of passage for every Chengdu native and eating a bowl of fried rice in an alley is something that brings people together. Late nights eating out under makeshift lighting powered by generators add to the narrative of the city. It is altogether “Chengdunese” to chew on a rabbit head, toss the gnawed skull to the ground and drive off in a shiny new BMW.

The authorities have a complicated relationship with the late-night food stalls. On one hand, the new districts going up around the city are not built with alleys and dead ends in mind. Boulevards replace the windy streets of the inner city, and management companies force food bikes and rickshaws piled high with noodles off to the side.

The city’s late-night food culture brings different segments of the population together.

But there is always space for the food carts, as the security guard buys a bowl of rice from the old man dishing out food, young girls addicted to chili peppers descend from tiny apartments, couples on their way home pause for a few sticks of barbecued fish, and the local hooligans pull up plastic chairs and lounge about chewing on skewers and smoking cigarettes.

Companies like Zappos and MeetUp, purporting to build the “New Metropolis,” are searching for an algorithm that will foster collisions and create community. But in Chengdu there is only flow and overflow, people colliding and filling up space, moving across the street, into the parking lot and further down the alley. Chengdu has the colliding culture, and no urban plan can compete with that.