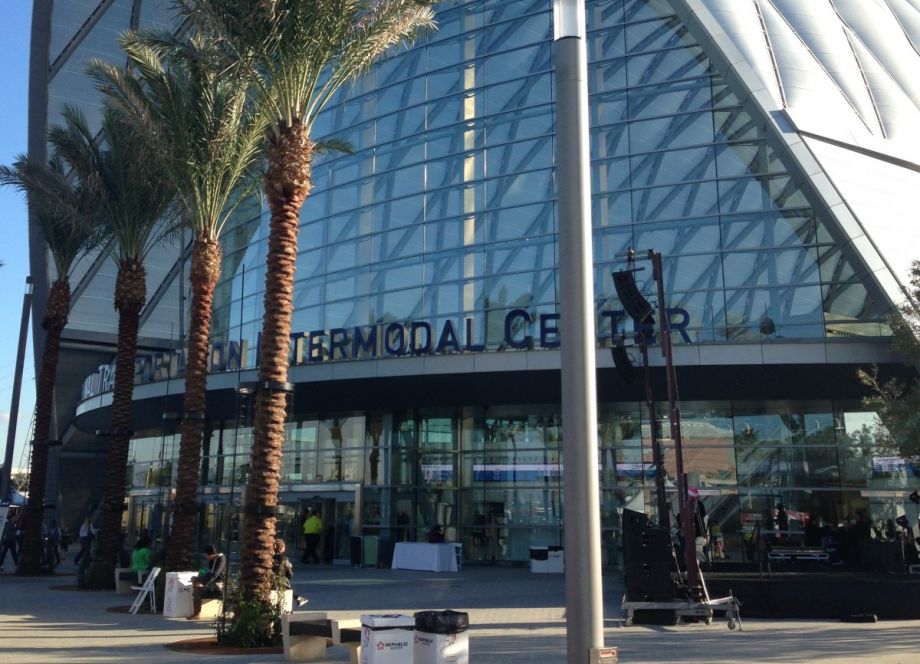 It’s only been three months since an intermodal station opened in downtown Anaheim, and already the local press seems ready to write it off.

ARTIC (the much-needed acronym for Anaheim Regional Transportation Intermodal Center) is “an iconic, LEED Platinum Design Hub that brings together the services of OCTA, Metrolink, Amtrak, Anaheim Resort Transportation, Megabus, Greyhound, taxis, bikes, and other public/private transportation providers,” according to its website.

But in local headlines? It “Fails to Live up to Expectations,” according to the Orange County Register, “Has Glitter But Not Ridership Gold” according to Voice of OC, and is a “$188 Million Station to Nowhere” according to OC Weekly.

This isn’t your usual right-of-center grumbling about Agenda 21; the outlets’ politics range from libertarian to alt-weekly. Some of their critiques are regional — taking on Anaheim’s Disney-fied identity and even the long shadow of high-speed rail. (ARTIC was originally planned as the mega-train’s Orange County terminus, but the state dropped Anaheim from Phase One maps in 2012). But some follow a national trend, targeting ridership forecasts that have turned out to be less than accurate.

“When Anaheim officials were selling the public on ARTIC … they said nearly 3,000 train boardings would take place starting with opening day in 2014,” Adam Elmahrek of Voice of OC wrote in February. According to Orange County Transportation Authority data from December, he added, daily boardings during the station’s first month averaged less than 800. Meanwhile, planners allegedly overestimated ridership as far back as 2009.

“The station is quickly proving itself to be the over-promised and under-delivered project we always knew it to be, but it is unfortunate that it has to cost $4.7 million annually to prove,” an Orange County Register editorial stated last month, citing Voice of OC’s data.

A City of Anaheim spokesperson did not return multiple requests for comment by deadline. But according to Voice of OC, officials claim the “opening day” numbers highlighted by press reports were actually supposed to represent first-year figures, and say the station shouldn’t be written off just yet.

Albert Kaneshiro with HOK, the firm that designed ARTIC, agrees with that last statement.

Regarding whether the station is underutilized, he says: “I think it’s too early to say after two months.”

Historically, Orange County has been rigidly suburban, a place where even the churches are built for cars. Ridership might be lagging now, but it could still pick up. And according to Kaneshiro, the station’s grand aesthetic — hangar-sized shell, open floor plan, vaulted interior — is meant as a cultural nudge in that direction, inviting residents to step out of their cars.

“The City of Anaheim stressed that it wanted an iconic intermodal facility that would transform how public transportation was perceived,” he says.

Another voice of support comes from Steve Wicke with the region’s Sierra Club chapter.

“We want to get public transportation going here,” he says, referring to both Los Angeles and Orange counties. “We want to get as many cars off the road as possible, and we’re in favor of as much [alternative transit] as we can get.”

But the hub does come at a hefty cost of $188 million in federal, state and municipal funds. When a capital project of that magnitude seems to deliver so much less than promised, residents’ frustration is understandable.

Anaheim’s bad press isn’t alone. In an article pegged to California high-speed rail last August, Grist’s Nathanael Johnson took on the fact that “public sector megaprojects” often rely on inaccurate data — and go over budget 90 percent of the time. And car-centric DOTs, with their notoriously padded traffic projections, aren’t the only culprit — according to a study published in Transport Reviews last year, “inaccuracy remains problematic for road, rail and roll projects alike.”

Johnson makes an interesting argument, that although we tend to see only public-sector corruption in trends like this, they also reflect our societal unwillingness to pay for infrastructure.

“Just about the only way to build infrastructure in this country is via deceit, but that’s only because we’ve been unwilling to pay for common goods,” he writes.

That may or may not be true in Anaheim — obviously regional politics are at play, and the price tag does seem high to justify a hub, without the addition of much new transportation as yet. But the critiques come at a time when California is desperately trying to shift, modally. Anaheim’s new monument to rail won’t be the last expensive capital project to under-deliver as California commuters fail to keep pace, but that doesn’t mean that they won’t catch up.

For now, Kaneshiro’s sentiment seems wise: Give them more than two months.