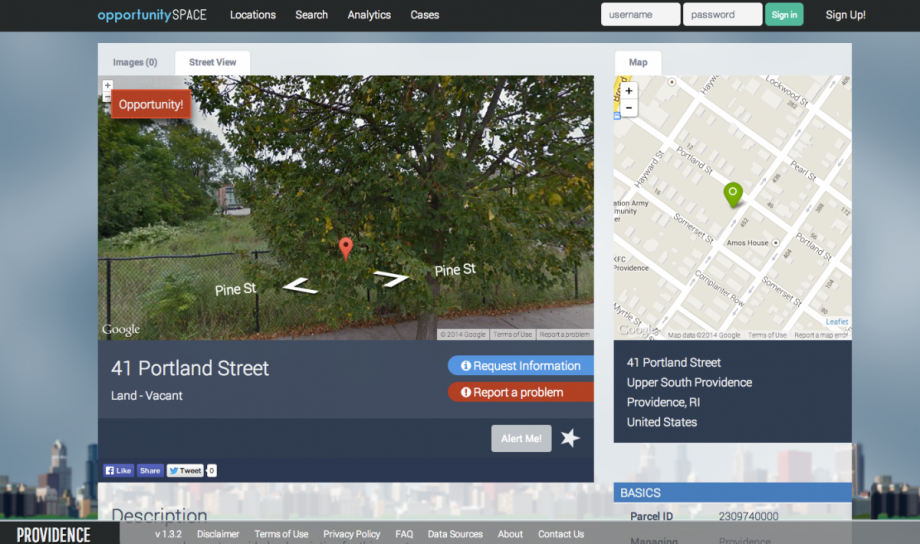 When Cristina Garmendia and her eventual co-founder, Alexander Kapur, began exploring the idea that would become the digital platform for public real estate called OpportunitySpace and went around informing city stakeholders that “governments don’t know what they own,” she braced herself for at least a little pushback. It was a bit brash, she says she’d thought. Instead? “Every time we said it, we’d get, like, the slow nod,” Garmendia says, adding with a laugh, “and that’s horrifying.”

Thus the need for their site and service, amplified by the fact that “cities own a great deal,” says Garmendia: vacant lots, recreation spaces, schools, fire houses, libraries, incinerators, city halls, rights of way and so on. The underlying problem, as she sees it, is that within cities, real estate management isn’t any one person or one agency’s job. Information on it thus gets locked away in agencies, often in proprietary databases or, shudder, on paper. “Sometimes they have it in Excel,” Garmendia says, “but that’s relatively advanced.”

And so, OpportunitySpace lets the public search for government-owned property much the same as you would through any other public-facing real estate site, though with added layers of government-specific data, such as whether the land is available through direct sale or only RFP, or if there are government incentives that might apply to developing the property. Click on a property on OpportunitySpace, and you get not only a photo but a name of the real-live contact within the city apparatus responsible for managing the site. As the company sees it, they’re marrying the work of open government with the work of public property management. (The Obama White House did something similar, though far more message-driven and less functional, with their mapping of federal excess properties.

About two years old, OpportunitySpace is up and running in a handful of cities, with more on the way. Garmendia points in particular to their work in a diversity of settings in Rhode Island: the capital of Providence and the far smaller towns of fairly rural Cumberland and fairly urban Central Falls*.

The platform was born from research that Garmendia and Kapur did as grad students at Harvard’s Kennedy School of Government, working with the city of Louisville and the jointly governed Jefferson County. In their paper on the topic, they quote a local real estate stakeholder: “Does the government have properties to sell? I didn’t know that.” At the time the city and county were holding — and keeping up — what was pegged at $9 million worth of excess land and buildings. Today OpportunitySpace maps everything a city owns, even if it’s not currently on the market. That’s not only so the city might recognize its own investment or development opportunities but because, says Garmendia, sometimes “governments will sell property only if someone asks them to.”

The site is a work in progress, though Garmendia says that the mechanics are mostly nailed down: They collect, digitize, aggregate and display city property data. The hardest bit, she says, might be on loosening whatever grips their might already be on that information. “For people who own the data,” she says of those government employees who serve as the keepers of those manila folders and database files, “it’s the source of their power.”

Somewhat more challenging is figuring out a sustainable business model. For one thing, while there’s widespread consensus that governments are leaving money on the table and under-utilizing resources by, indeed, not knowing what they own, there are others in the space who focus more on the notion that better trained and better incentivized managers, and not open data, is the key. (Here’s one example, from the consulting giant Accenture.) For another, a for-profit in the civic tech universe can struggle to find private-sector funders*, says Garmendia, especially those willing to entertain the idea of governments as clients, and especially in the often glacially paced world of public real estate.

Perhaps, though, by speeding things up a bit, OpportunitySpace can be its own best answer.

*Corrections: Descriptions of the nature of the towns of Central Falls and Cumberland — “fairly rural” and “fairly urban” — were flip-flopped, illuminating the author’s limited knowledge of Rhode Island geography. They have been fixed. And OpportunitySpace’s business model was incorrectly noted: it is a for-profit company, not a non-profit organization. That reference has been fixed. In addition, language referring to the company’s potential pool of funders has been tightened to more accurately reflect the situation.