Op-Ed: Waging the 21st-Century War on Poverty – Next City 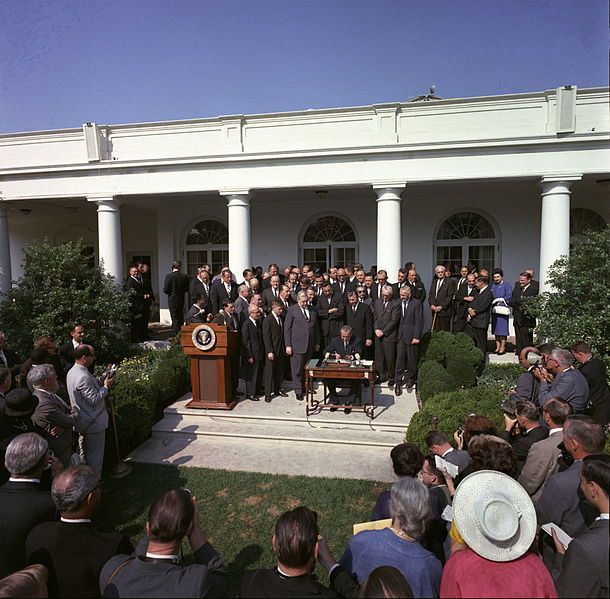 Fifty years ago today, during his State of the Union address, President Lyndon B. Johnson declared “unconditional war on poverty in America.” This war was to be waged primarily through federal legislation. An array of bills and acts resulted in the creation of programs such as food stamps, Head Start, Medicare, Medicaid and work-study. Today, these programs make for the basis of a contentious, and often divisive, national debate about how Americans live and what we as a society envision as the rights of the most vulnerable among us.

Some politicians argue that poverty has categorically won Johnson’s war, and that the federal programs he brought into existence further exacerbate poverty by disincentivizing work. On the other side of the debate, many assert that poverty would actually be much worse without these programs. Indeed, a December study by Columbia University researchers found that, were it not for the safety net, the national poverty rate would be close to 31 percent — higher than the 25 percent rate in 1967. Instead the study shows that, largely as a result of government transfer programs, poverty has fallen by nearly 40 percent since the 1960s. Despite such gains, it is clear that we have a long way to go.

Today, nearly one in six people, or 46.5 million Americans, live below the official poverty line. Recently, President Obama gave a speech that reflected on LBJ’s vision, focusing his remarks on the threats that growing inequality and lack of upward mobility pose to our place in the world, as well as our economy, democracy and way of life. He emphasized that the Federal Government has a vital role to play in ensuring that every child has a fair chance at success. But he also recognized that we cannot legislate pervasive poverty and inequality away, and he is right.

The United States of 2014 is not the United States of 1964. President Obama’s recent pledge to make inequality the overarching priority of the rest of his term is sure to be tested, as evidenced by vigorous efforts in the past few weeks to roll back food benefits. Meanwhile globalization, the Internet and other technological advancements have fundamentally changed the world. As the nation transitioned from the center of the world’s economy to being a player in a truly global one, income inequality and stagnation has increased. We have failed to keep pace with the rapid rate of change in terms of how we prepare citizens to meet the opportunity of the present and the future, and how we create that opportunity. In a nutshell, the root of the problem is education and jobs.

Compounding these issues, and the urgency with which they must be addressed, is the country’s imminent demographic transformation from majority white, to majority non-white. This shift means that when we talk about race as a long-acknowledged barrier to opportunity, we now talk about it as an obstacle for a soon-to-be majority of our citizens. If we don’t take steps now to accelerate the pace of change, that majority will be significantly less educated and more impoverished than the current majority — certainly not a model for the leader of the free world.

Unlike in 1964, today’s War on Poverty is about bringing the American ideals of opportunity, shared prosperity and social mobility to the majority of the country, not just to the few who have been left behind. It is time to think not about how to declare an end the War on Poverty and walk away from the programs that we have spent the last half-century developing, but rather how to develop tools suited for today’s battles.

Re-engineering systems so that they create opportunity, preparing people for 21st-century jobs, and connecting people to essential products and services is a complex undertaking with no existing solution. But this is what we must do if we are to tackle poverty, inequality and mobility. We have not won the War on Poverty, but it is not yet lost. Cities are at the front lines, and the innovation brewing in them offers great hope for the future.

Ben Hecht is president and CEO of Living Cities.