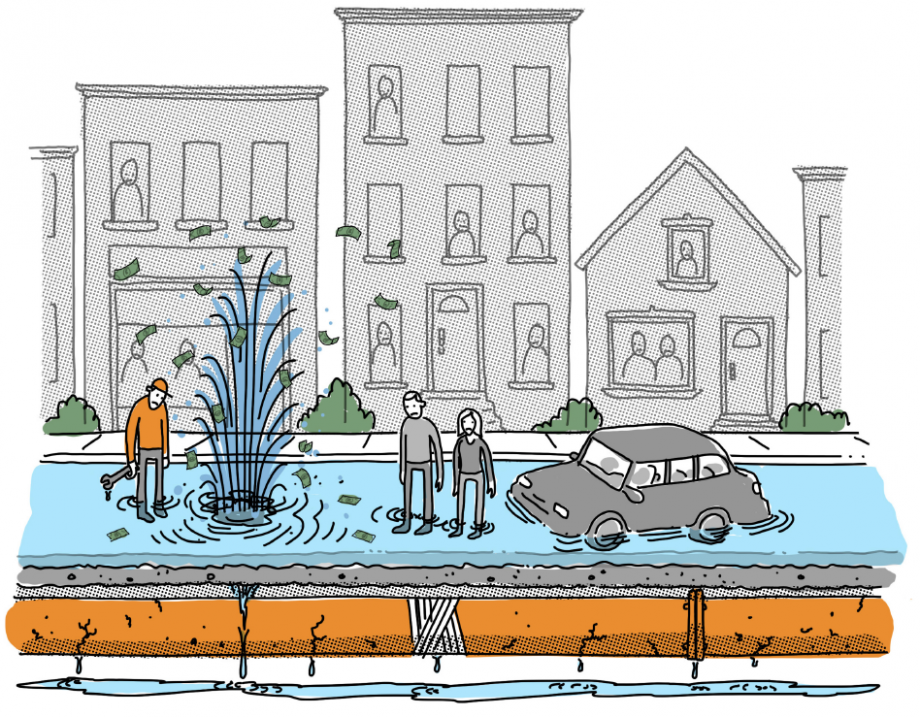 New York and Chicago are fond of fighting about trivialities such as which city has the better crop of skyscrapers. But both should pay more attention to what happens under their feet — particularly the alarming state of aging pipes in the U.S.

If all of the estimated 2.1 trillion gallons of expensive, treated water that leaks from the country’s outdated systems each year sloshed its way to New York City, a 298-foot flood would swallow Manhattan. If this wave of wasted water hit Chicago, the Windy City would become a swimming pool with a 43-foot deep end.

That’s right, our own leaky pipes could drown us.

In the Great Lakes states alone, an estimated 66.5 billion gallons of treated water is lost each year. That’s enough to fill Chicago’s Willis Tower 16 times. The good news is that it’s also enough to meet the annual water needs of 1.9 million Americans.

Yet today, the leaks still represent money down the drain. Water loss from failing infrastructure, faulty metering and flat-out theft costs money, and often means lost revenue for utilities and higher rates for consumers. Between 1996 and 2010, the cost of water services in the U.S. rose by nearly 90 percent.

Clearly it’s time to fix the leaks. But first we have to find them.

Our aging water infrastructure has long been an out-of-sight, out-of-mind problem. President Obama recently went on the road to tout infrastructure investment as economic development, but he left out one critical word: water. Americans can see the collapsing bridges, dilapidated roadways and potholes, but they don’t see the cracks in their water infrastructure until mains break or sinkholes swallow city blocks.

Even for municipalities and utilities, pinpointing the losses has been difficult. They know they pump a certain quantity of water to consumers, but that they only collect payment for a smaller amount. Where’s the lost water going?

In a new report, “The Case for Fixing the Leaks,” my colleagues and I call on state and municipal leaders, water service utilities, industry-related agencies and others in the Great Lakes states to lead the nation toward improved water management. In short, we ask them to find and fix the leaks.

Fortunately, a suite of cost-effective approaches to reducing water loss is now available. Best practices include state-of-the-art auditing methods, leak detection monitoring, targeted repairs or upgrades, pressure management and better metering technologies. By adopting such practices, water service providers can save themselves and their communities money in the long run while protecting resources and generating economic growth.

Fixing the leaks can help fix the economy. Dollar for dollar, infrastructure investments create 40 percent more jobs than across-the-board tax cuts, and over five times more jobs than temporary business tax relief. The U.S. Commerce Department’s Bureau of Economic Analysis estimates that for every job added in the water workforce, 3.68 jobs are added to the national economy.

Fixing the leaks will also reduce the amount and cost of energy needed for water production and distribution. The nexus between water and energy is too important to overlook: It takes water to generate energy, and energy to generate water services. Some 75 percent of the cost of municipal water processing and distribution is tied to electricity needs. Reducing leaks will lower energy demand and cut water production costs, all while benefitting consumers.

“Yeah, but it will cost too much. Where’s the money?” I hear it all the time, in Great Lakes states and around the country. But here’s a better question: What’s the cost of doing nothing? It’s like keeping the refrigerator door open. You know there’s a cost in lost cooling, that the unit will have to work hard to regulate temperature and that you’ll pay some (albeit small) premium on your next electricity bill. With water infrastructure, as we keep our minds closed, the eventual problems only get worse, including main breaks and higher costs for repairs.

So let’s start by understanding how much water we’re actually losing. Establishing universal auditing and standards across water utilities is a critical and low-cost first step.

Many water utilities are already taking this route, and several states have water loss policies that require some form of auditing. States in the Great Lakes region in particular — as stewards of the world’s largest source of fresh water and an economy that generates nearly 30 percent of the nation’s gross domestic product — have an opportunity to demonstrate leadership.

American cities can no longer afford to lose billions of gallons of treated water to crumbling infrastructure. The costs, like the potential waterlines on our skyscrapers, are too high.

The Center for Neighborhood Technology, a grantee of the Surdna Foundation, is a Chicago-based non-profit focused on sustainable cities. CNT promotes the better and more efficient use of the undervalued resources and inherent advantages of the built and natural systems that comprise the urban environment.