Op-Ed: How to Grow San Diego’s Food Security from the Grassroots – Next City

Op-Ed: How to Grow San Diego’s Food Security from the Grassroots 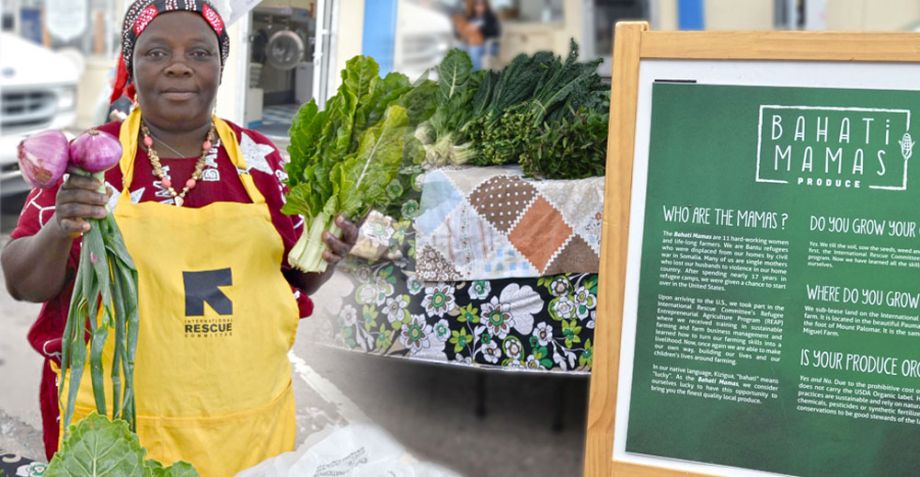 The smell of freshly popped kettle corn wafts from a row of tented white stalls. Nearby a vendor sets up her display of Mexican statues and handicrafts. And midway down the row, Sitey Mbere is donning her yellow apron and preparing for another Sunday at the Point Loma Farmers Market in San Diego.

Sitey is a Bahati Mama, a close-knit group of female refugee farmers who sell their produce at the city’s weekend markets. A stout and proud woman, Sitey has been a Bahati Mama for 3.5 years. Like most of the women in the group, Sitey is a Bantu refugee from Somalia and farmed long before her involvement with the market. “First we started in our community garden,” she says. “But before that, I farmed in Somalia.”

The Bahati Mamas first organized at the New Roots Community Farm in the San Diego neighborhood of City Heights, known for its diverse population and eclectic mix of cultures. It’s also one of the most underserved parts of the city, particularly when it comes to food access. The area has about half of the full-service grocery stores needed for the size of its population, and in a neighborhood that relies on public transportation, this lack of local access to fresh produce represents a serious gap in basic infrastructure that many in more affluent communities take for granted. In short, City Heights is a classic example of what many experts have come to call a “food desert.”

The Bahati Mamas wanted to give their children better food options and hoped that farming could be the path to self-sufficiency. So they joined the International Rescue Committee’s Refugee Entrepreneurial Agriculture Program, a training program to help refugee populations establish their own agricultural businesses. Side by side with refugees from Iraq, Burma, Congo, Uganda and Burundi, the Bahati Mamas grow their organic vegetables on a 20-acre farm in Pauma Valley, a rural area about an hour’s drive from San Diego. “We learned important lessons about growing in the U.S.A. like water conservation, irrigation and using tools we didn’t have at home,” Sitey says. “But we also learned things like sales, marketing and business models.”

Every weekend, the women sell their crops at the City Heights and Point Loma farmers markets. They also sell their organic produce to a few local restaurants. As with other farmers on the plot, the profits are divided up as income for the women. But as Bilal Muya from the International Rescue Committee points out, “There are minimal profits. Most money goes to the drivers to pay for their time and gas. The women don’t have a truck to drive themselves.”

Despite the challenges, Sitey says she has big dreams for the Bahati Mamas and hopes that the program can eventually distribute food to the entire city and become a model for other refugees and farmers across the nation. “I am very happy,” she says. “I love being an example for our children and grandchildren. We are showing them that if people come together, we can do anything. We support each other and bring each other up.”

With support from the non-profit advocacy group Mid-City CAN, the Bahati Mamas are also working to distribute their organic vegetables in local school lunch programs. This could be a profitable business opportunity, since more than half of the students in the San Diego Unified School District qualify for free or reduced-cost lunches. But they’re not doing it for the money.

“It’s important that we get the food we are farming into the schools,” Sitey says. “We are working hard to provide for and feed our children and we want to give back to the schools and get the students fresh produce.”

If successful, San Diego students from City Heights may soon see more organic and healthy options on their cafeteria menus. Emily Serafy Cox from Mid-City CAN says it won’t just stop there. They will also incorporate gardening and farming education into the curriculum, teaching students the importance of local production.

The Center on Policy Initiatives, a grantee of the Surdna Foundation, is a nonprofit research and action institute dedicated to advancing economic equity for working people and diverse communities throughout the San Diego region.