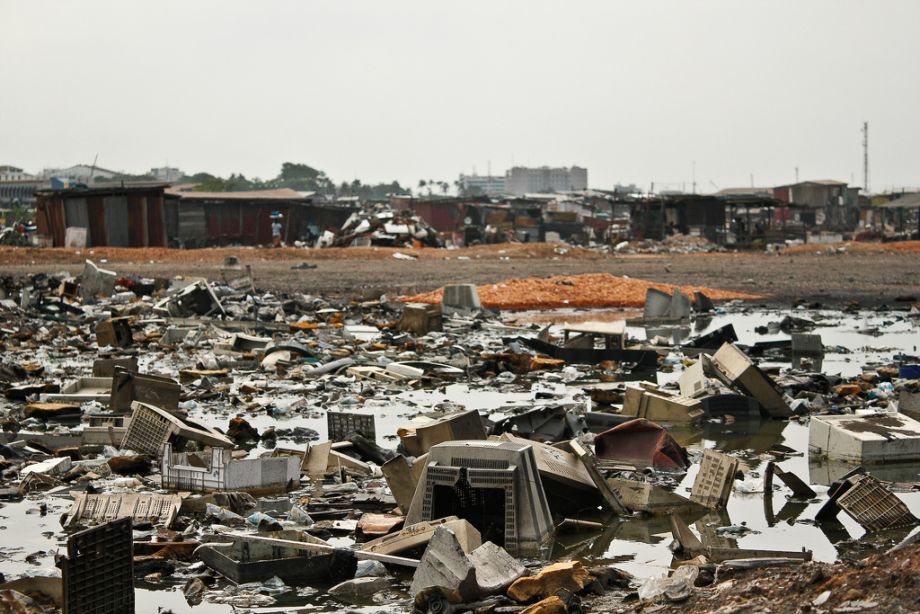 Not a season goes by without the launch of a new smartphone, tablet or other shiny gadget. But the sale of millions of new devices also means that yesterday’s electronics may be carelessly tossed in the trash, with owners unaware of the danger such materials pose to the environment. In San Diego, one man is building local infrastructure to ensure that consumers disposing of old technology can do so in a responsible way that won’t pollute the air and water — either at home or abroad.

When he was a young man, Clando Brownlee never imagined he’d become an environmentalist, much less a business owner and community leader. He struggled with drug addiction and was still illiterate at age 19. He considers himself fortunate to have entered a Christian drug rehab program when he was 21. “I was going to die in the street or go to the penitentiary,” Brownlee says.

Today, he’s trying to make the most of his second chance by serving his community. Specifically, he wants to keep Americans from throwing away their old phones, televisions, computers and other gadgets.

Too much of this electronic waste ends up in landfills, where it can leak toxic chemicals like mercury, arsenic and lead into the soil, and ultimately into the air and water. Of particular concern is the common practice of shipping electronic waste to developing countries, often in Africa, where safety standards are lax. In these countries, it’s not unusual for young children to end up working at processing sites, where they’re exposed to toxic chemicals.

Stateside, communities of color disproportionately feel the effects of electronic waste. In North Carolina, for example, predominantly black neighborhoods are nearly three times more likely to be located near a landfill.

And when we throw away electronics, we burn money, too. Each year, Americans dump cell phones containing $60 million worth of gold and silver.

Brownlee wants to change all this. After working for years to promote recycling and eco-awareness among kids, as well as serving as a partner with Green For All’s “Green the Block” campaign, he decided to focus on electronics, which account for a whopping 70 percent of all toxic waste in the U.S.

Recycling electronics is a small act that brings huge benefits. Consider this: Recycling one million laptops saves energy equivalent to the electricity used by more than 3,500 homes in a year. And by recovering valuable metals, recycling helps cut back on new mining. For every one million cell phones we recycle, we can recover 35,000 pounds of copper, 772 pounds of silver, 75 pounds of gold and 33 pounds of palladium.

In light of these statistics, Brownlee started a company, Go Green 4 Good, with the goal of making it easy for people to responsibly dispose of old electronics. The company hosts regular e-waste recycling events where folks can bring their outdated or broken items to easily accessible locations, like Home Depot stores, and hand them off at no charge.

In an effort to support higher safety standards, Go Green 4 Good certifies that all of the electronics it collects are processed properly here in the United States. It takes the collected items to a facility, where they’re dismantled, and valuable metals like copper are reused and sold. Brownlee says TV screens and computers are especially risky, as they have to be smelted in order to separate toxic lead from the glass.

Businesses like this are in demand. The state of California is working to keep dangerous items out of landfills, in part by adding a fee on to new electronic purchases, which helps cover the cost of recycling services like Brownlee’s. And while his company is thriving, Brownlee says profit wasn’t his primary motivation for getting into the business. “We don’t do it for the bottom line,” he says. “We do it for the community.”

Brownlee’s commitment to the health of future generations is sincere, and it runs deep. As someone who was given a second chance in life, he feels a responsibility to give back. And he sees a clear connection between his past and the work he does today. “Part of my green thing is redemption,” he says. “Recycling goes way beyond computers and TVs. It’s recycling lives.”

Green For All is a grantee of the Surdna Foundation.