Op-Ed: Ending a Cycle of Wasted Water and Dead-End Jobs 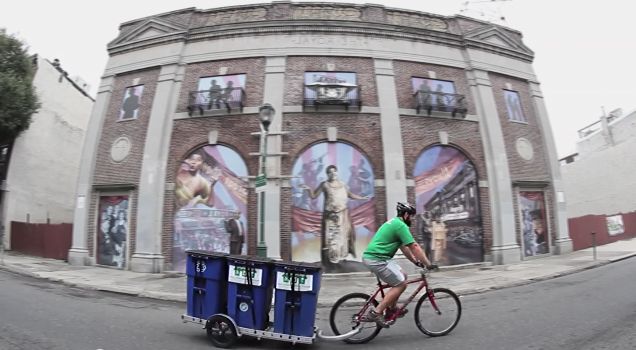 Gabriel Mandujano never thought he would end up in the laundry business. The 29-year-old’s passion lies in economic justice and sustainability, and he started his career at a community development corporation in West Philadelphia and, later, advocating for sustainable transportation in Mexico City.

Mandujano wanted to change the world, not the sheets. But when one of his friends suggested he start an environmentally friendly diaper service, he got curious. His research led him to disturbing facts that most people don’t think about when they head to the laundromat. The laundry industry, it turns out, is responsible for massive water and electricity waste, and lags far behind in sustainability.

Nonetheless, Mandujano saw possibility. The laundry industry could serve as a gateway into the workforce for people who typically struggle to find employment. Entry-level service jobs abound, and there’s lots of opportunity for growth.

Something clicked. For someone who had spent years working to bring economic development to low-income communities, it seemed like an opportunity that was too good to pass up.

Mandujano founded Wash Cycle Laundry on a shoestring budget in 2010. Today, the company hauls more than 6,000 pounds of laundry a week — by bicycle. The staff then washes the laundry with local, non-toxic detergent, using high-efficiency machines that slash water and energy use by 30 percent.

Most importantly, Wash Cycle Laundry creates pathways out of poverty. Mandujano worked with Philadelphia’s Workforce Development Corporation to hire people directly out of the public assistance system. Today, half of his full-time employees are former welfare recipients.

But his efforts go beyond hiring workers. At Wash Cycle, the goal is to help people build careers. As a student of workforce development, Mandujano recognized that getting people into jobs was only the first hurdle.

“If you go from welfare to a minimum-wage job, it’s often easier to go back to welfare than up to the next rung on the career ladder,” he says. Low-wage service jobs too often fail to encourage career development. That’s something Mandujano wants to change. At Wash Cycle, he does it by helping them build skills that will take them to the next level.

“We spend our time building our workers’ assets instead of addressing their deficits,” Mandujano says. “Our supervisors take the time to find out about the career goals of each employee and then we offer them ‘stretch’ assignments to help them build those skills.”

For Tracey Martin, a 45-year-old mother of three, Wash Cycle gave her a chance to get back into the workforce and thrive. She had spent four years fruitlessly looking for a job while raising her youngest daughter, now nine. Martin went to nearly 200 job interviews but still couldn’t find work.

Then, through the Workforce Development Corporation, she found Wash Cycle. When Mandujano hired her as an entry-level laundry operator, she expressed interest in taking on a leadership role. He put her in charge of researching the possibility of opening a new facility. Today she manages that site.

“I’d never managed a store before in my life,” Martin says. “My boss trusts me to be in charge. He believes in me and he pushes me. I’m so proud of myself.”

Investing in his employees certainly hasn’t hurt Mandujano’s bottom line. The company is thriving. It has doubled its staff since it opened in 2010 and there are plans for further expansion.

“It’s great to save a gallon of water,” Mandujano says. “It’s even cooler to see people grow into management roles and leadership positions they haven’t taken on before.”

Green for All, a grantee of the Surdna Foundation, is a national organization working to build an inclusive green economy strong enough to lift people out of poverty.