Op-Ed: Chicago’s Relationship with Cars Gets a Little Cleaner – Next City

Op-Ed: Chicago’s Relationship with Cars Gets a Little Cleaner 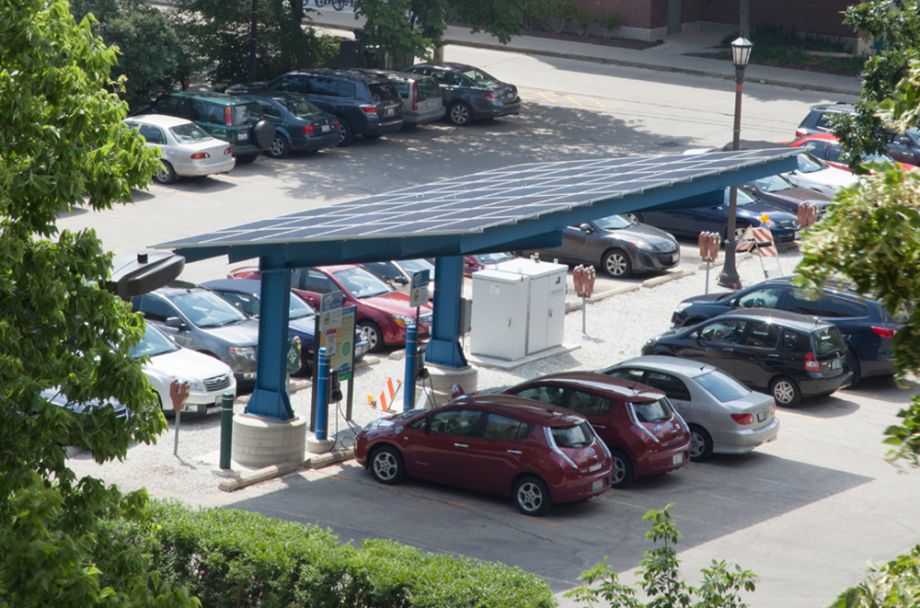 It’s a strained relationship sometimes between cities and cars, but a relationship nonetheless. Cities must provide infrastructure for cars, and many are showing their commitment to promoting cleaner alternatives such as electric vehicles or car sharing services. Yet new programs in Chicago show that further progress in these areas may require additional, complementary systems — or in some cases, more efficient use of existing resources.

Often, the need for these advancements is first recognized by those closest to potential users. Some of the Windy City’s most promising initiatives are the result of local partnerships between non-profit, private and government sectors.

Take electric vehicles (EVs), for example, which are increasingly popular among urban dwellers seeking efficient and eco-friendly transportation. Now, many Chicago EVs can be fully charged by the sun, thanks to a handful of recently installed solar canopies in neighborhoods across the city. Under development for three years, the new solar infrastructure is the product of Alternative Transportation for Chicagoland (ATC), a non-profit affiliate of the Center for Neighborhood Technology. ATC operated Chicago’s IGO CarSharing before the service was acquired by Enterprise earlier this year.

Sharon Feigon, ATC’s CEO, first thought of harnessing the sun’s energy as clean power for vehicle charging stations when IGO introduced electric vehicles into its fleet. “Electric power is good,” Feigon said, “but we have to ask ourselves where that power comes from. To make EVs truly emission-free, we need a clean energy source. Our solar canopies make this both possible and practical.”

The first solar canopies were installed at the Illinois Institute of Technology on Chicago’s South Side, the Uncommon Ground restaurant on the North Side, and the Evanston Public Library. A fourth canopy is just starting construction in the village of Oak Park. The renewable solar energy will not only be used to charge EVs — any surplus power will be available to supply nearby buildings or be sold back to the grid.

Local leaders welcomed the installations, a project supported by about $1.5 million in grants from the Illinois Department of Commerce and Economic Opportunity, the Illinois Clean Energy Community Foundation and the U.S. Department of Energy. Chicago Mayor Rahm Emanuel signaled his support, while Evanston Mayor Elizabeth Tisdahl considers the canopies a visible sign of forward thinking that will increase awareness. “The addition of the solar canopy… directly reflects our commitment to developing policies and implementing initiatives that we believe have a direct impact on the environmental and economic sustainability of Evanston,” said Tisdahl.

ATC’s project also includes solar panels at two building locations. Together with the canopies, the project will boast a capacity of 150 kilowatts, producing 150,000 kilowatt hours of renewable energy each year.

But the impact of the solar canopy installation goes beyond environmental benefits. Already, the project has created jobs in skilled labor and manufacturing, and solar panel installation trainees from the International Brotherhood of Electrical Workers will install panels at two buildings that can generate up to 70 kilowatts of power.

To Kathryn Tholin, CEO of the Center for Neighborhood Technology, the solar canopies are a tangible example of how cities can solve environmental and economic challenges. “The best cities are those that build infrastructure systems that use resources more creatively and efficiently,” she said. “This project, capturing and using the renewable power of the sun, brings Chicago closer to this vision.”

Innovation in vehicular infrastructure also calls for increasing the efficiency of existing systems. Sometimes the seemingly mundane, like the normal nine-to-five of a work week, can mask opportunity. Chicagoland firm Christopher B. Burke Engineering, Ltd. (CBBEL) sets an example of how businesses can make simple choices that both reduce their vehicular footprint and benefit the broader community.

CBBEL needs a fleet of reliable company cars for its employees. Its construction and project sites throughout Chicagoland must be visited regularly. Yet unlike most firms, it has a unique fleet. Monday through Friday, CBBEL employees in the Chicago suburb of Rosemont use vehicles the company doesn’t actually own, or even lease. Instead, they rely on two low-emission cars provided by IGO.

But CBBEL has taken its commitment to car sharing even further. On Friday evenings, firm employees shuttle their two IGO cars to the Rosemont Blue Line train station so the vehicles can be used by local residents to run errands, drop kids at soccer practice, visit friends and family, or take a road trip.

The choice to reduce the fleet through an IGO partnership was driven both by potential cost savings and an environmental consciousness ingrained in the company’s culture. For example, CBBEL has an EV charging station at its headquarters building, which boasts a green roof and garden. Employees are even incentivized to bike to work, earning 75 cents for each mile cycled.

“The decision to utilize shared vehicles through IGO was really a natural extension of our ethos,” said Christopher Burke, president of CBBEL. “Having a big fleet of company cars, we realized, wasn’t a sustainable expense. Now we have vehicles on our lot, at the doorstep, but we also have increased efficiencies, economically and environmentally.”

For Rosemont residents, access to the CBBEL shared vehicles on the weekends has been a boon. The two cars currently available to IGO members are a Toyota Prius hybrid hatchback and a Toyota Yaris hatchback. Since the vehicles were introduced at the Rosemont Blue Line Station in November 2012, they have been used for a variety of trips, which can last from a few short hours to a full day.

Infrastructure upgrades are often conceived as large-scale public projects. But Chicago’s solar canopies and car sharing options are examples of effective non-profit and private-sector innovations. This kind of investment in cleaner vehicular infrastructure may begin on a modest scale, but it can pay dividends for years to come.

The Center for Neighborhood Technology is a grantee of the Surdna Foundation.