One Immigrant’s Story: Building Bridges Through Art – Next City 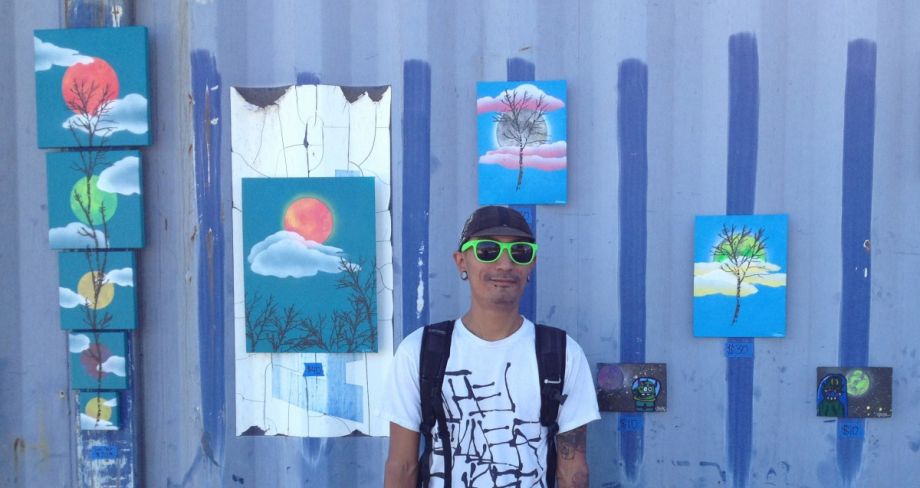 The Elysian Valley Arts Collective is a non-profit organization based in Los Angeles, CA. Since 2008, the organization has worked in Elysian Valley, using art to catalyze this underserved, working-class neighborhood bordering the Los Angeles River. Among its arts programming activities, the EVAC organizes a biennial festival called the Frogtown Artwalk. I had the opportunity to interview long-time resident and president of the local Neighborhood Watch, David Delatorre, to talk about how art has transformed this little corner of the city, and why that matters.

Tracy Stone: Tell me a little about your history in Elysian Valley.

David Delatorre: I was born in Zacatecas, Mexico. I came to America not speaking a word of English, a little darker than I am presently (because I was out in the sun a lot, more than I am today), with curly hair, so I dealt with the bullying by the local gang. You heard the drive-bys, you heard about the deaths that occurred day in and day out in Elysian Valley. I used to get beat up a lot by the gang members.

TS: You are one of our strongest neighborhood advocates and activists. Please talk a little bit about your activities, and why you decided the neighborhood needed you/them.

DD: I saw a need that wasn’t being met in the community. And I wanted to see change; I wanted to offer a positive where seemingly everything was negative about life in EV. Nobody cared, nobody believed that things could be different. I went out and made a genuine effort to see that change.

TS: Prior to 2006 (the first Frogtown Artwalk), did you know any artists living/working in the Elysian Valley neighborhood?

DD: No, I didn’t. Art was not something I thought of, or had an appreciation for. After the Frogtown Artwalk, I began to experience an artist community that frankly I didn’t know, and interpretations of art that were strange to me, new to me.

Hugo [Martinez] is a perfect example. I met him by pure accident, walking the neighborhood, and seeing him living out of a car, kid you not. I approached him, had a conversation with him in Spanish. I came to know soon thereafter that he was an artist, and his art, well, it was shocking in so many ways. From that point forward, I would run into him, start to have conversations with him, and lo and behold, the next time I see him he is at the Artwalk, displaying his work, and he turns out to be quite a celebrity. And he was very comfortable in that environment.

So, I get to know Hugo. I buy some pieces that I still own today. I was happy to support something he was so passionate about. And I think one pleasant thing I found about artists — they are not in it for the money. At least that is my impression. You know there are some that are enriching themselves with fine art. But most will do it for no money, because they are passionate about what they do.

Understanding then what art was doing in my life, and how it was shaping Elysian Valley, I began to look at art as a means that could combat the bad elements I was seeing in my community – graffiti, right? So, I commissioned Hugo, at my expense, to do the mural that is at present at the corner of Riverdale and Riverside Dr. And graffiti went down at that site, the minute his mural went up.

TS: Do you think that the Frogtown Artwalk (or any other kind of exposure to art) has impacted youth in the area?

DD: Absolutely. And I say this with total confidence. I know that it has already impacted my children and their generation. It is an event that they look forward to, not only in appreciation of the art itself, but also in appreciation of the experience, the social experience. Talk about missing that in today’s time, with our social distancing dynamic and pandemic.

I must confess that my initial feeling about an art walk unfolding in Elysian Valley was not a positive one. I honestly didn’t know what it meant, what it entailed, what impact it would have in our community. But that is why I completely bought into it when I saw how you went out of your way to see that it was community-driven and community-inclusive.

I report graffiti day in and day out to the LAPD because I’m a firm believer in the broken window theory. Graffiti was associated with Chris Ocampo. So, my first art effort in his life was, I came across him in a walk on the river, and he was in full “art mode” (laughs), and I go, really? “You are just too good, you have too much talent.” And I challenged him, “You should consider putting this to canvas.” And he looked at me like I was talking a foreign language. On more than one occasion I said, “You should think about it, and [the Neighborhood Watch] would sponsor you. We would give you a space at the upcoming Artwalk for you to do this.”

To see him [finally] say yes to that, talk about how unlikely that sounds, right? We are supposed to be at odds. I’m supposed to be looking to drop the police on him. Quite the opposite. When he had his pieces alongside the Neighborhood Watch, people were coming up, and they said, “Really, this is our Chris?” It was a renewed Chris in the eyes of his own family and friends, and he was so well-received by the artist community, by his neighbors, and by total strangers that came to that Artwalk. They bought his pieces. I bought a piece at that initial Artwalk (that I still have today). And I think if the experience had not been that good, if he had not felt welcomed in his own neighborhood and received in the manner he was, as a fellow artist, as renowned as the next one, maybe we are not having a conversation and glowing in sharing the fruits of that.

One of the pieces was a Captain America. I bought it and I held it in my home office for many years. Fast forward, I had an office visit with Captain Sandoval, Northeast LAPD captain on San Fernando Rd. His office is decorated in Captain America art. He said, “It is a long story, David; my daughters sent me a Captain America figurine one day, and now everyone who knows me, now sends me something.”

I shared with him the Chris Ocampo story. “I am going to send you that piece that I hold, because, think of the significance of what we are about to do. We are going to go from a graffiti fellow on the street and tomorrow you are going to house his artwork in your office. And today, it sits in Captain Sandoval’s office.

TS: I love that story…

DD: To me, that is priceless. It goes to the core of what you and I are trying to do in EV; turning that corner to something better in life. One of the things that really made me smile was when I heard that Ocampo was showcasing his work outside of Elysian Valley. He was in Downtown LA, he was in Pasadena galleries, and he had been invited to show his work elsewhere, and that told me he had moved past our little Elysian Valley community. That was pretty cool.