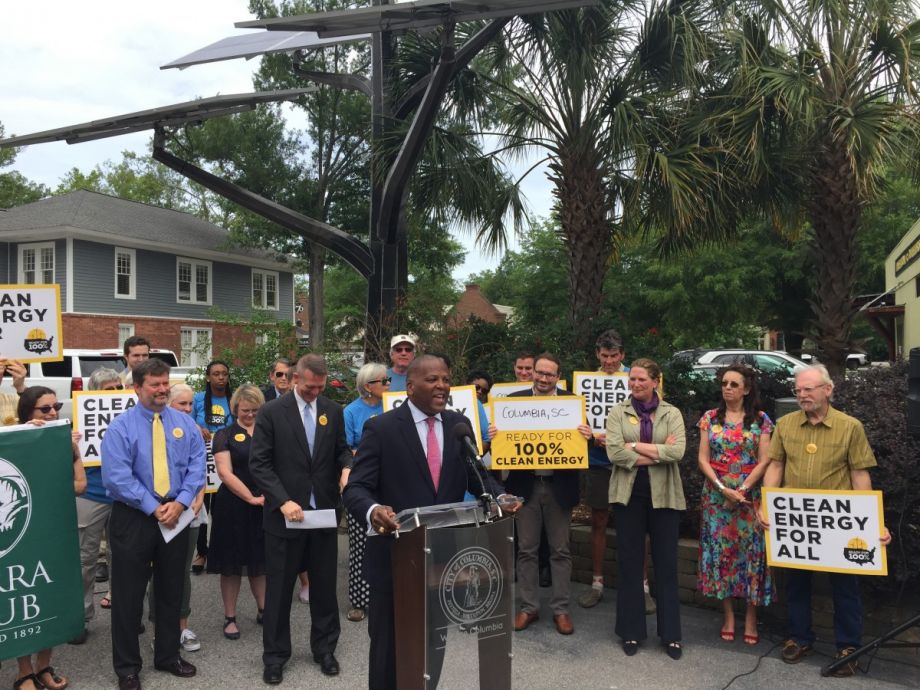 Mayor Steve Benjamin of Columbia, S.C., is one of the national co-chairs of the Sierra Club's Mayors for 100% Clean Energy Initiative. (Photo courtesy of The Sierra Club)

Last month’s midterm elections made clear that politically, at least, our country may remain divided. But there is one priority that almost all Americans can agree on: we need 100 percent clean, renewable energy.

Over the past few years, 100 cities and towns across the country — such as those we represent: Columbia, South Carolina; Salt Lake City, Utah; and San Diego and San Francisco, California — have committed to power our cities on 100 percent clean, renewable energy like solar and wind. Local communities are leading a national movement toward cleaner, cheaper, and more reliable sources of energy, and at the same time demonstrating there is widespread bipartisan support for modernizing our nation’s energy supply.​

Roughly 1 in 7 people — 15 percent of the U.S. population — now lives in a place that is making the transition to 100 percent renewable energy. Big cities like Atlanta and Denver and small towns like Abita Springs, Louisiana, and Hanover, New Hampshire — as well as the entire state of California — share this common purpose. In fact, Republican-led Georgetown, Texas, and five other cities are already running on 100 percent clean energy.

In San Diego, we just announced the formation of a new joint-powers entity to implement a program called Community Choice Aggregation, which will allow us to reach 100 percent clean energy by 2035 while lowering energy bills by 5 percent or more. San Francisco implemented a similar program in 2016, called CleanPowerSF, one of the first in the country. This model gives residents more control over where their energy comes from – and it will help cities in California meet the state’s renewable energy mandate significantly earlier than the 2045 deadline.

In Utah, our cities and ski resorts are working with our electric utility, Rocky Mountain Power, to meet clean air and sustainability goals through renewable energy. Salt Lake City has a goal to be powered entirely with renewable energy sources by 2032, and our utility is working with us and our neighbors to pursue cost-competitive solar, wind and geothermal energy projects. In the neighboring state of Colorado, ten cities committed to 100 percent renewable energy are working with their utilities to transition the electricity supply across the state. And Coloradans just elected a governor who ran on a statewide 100 percent clean energy platform.

According to the League of Conservation Voters, the platforms of more than 1,400 candidates in the past election included moving to 100 percent clean energy. This is no fluke. Recent polls show that public support for 100 percent renewable energy is at an all-time high, and power providers are taking note. According to a survey conducted on behalf of Edison Electric Institute, a utility industry think-tank, over 80 percent of the population believes 100 percent clean energy is the right thing to do.

As mayors, it is our job to address the day-to-day needs of our local communities. The effects of climate change, pollution, energy costs, and our desire for a strong and stable local economy are a few of the reasons we recognized clean and renewable energy is in the best interest of our residents. Renewable energy is a worthy goal: it creates jobs and economic opportunities, results in cleaner air, and is quickly becoming the cheapest source of power available anywhere. In fact, in some regions, clean energy is already consistently cheaper than traditional coal and gas power.

As co-chairs of Sierra Club’s Mayors for 100% Clean Energy Initiative, we are working with hundreds of other mayors who share this vision. We applaud each other’s efforts and work together to translate our ambition into bold and decisive action, just as we are working with our communities to ensure we reach our goals without leaving anyone behind. The transition to clean energy represents an opportunity to address poverty and pollution faced by vulnerable communities and ensure that the benefits of a clean energy economy are equitably realized.

From the Sierras to the Appalachians, and from the Great Lakes to the Gulf, cities are committing to a future powered by clean, renewable energy. The goal of 100 percent renewable energy is ambitious yet attainable, and cities are proving that local action can make bold changes that will be felt around the country, and around the world.

We are moving forward. When it comes to clean energy, we’re ready for 100 percent.