On Washington Avenue, a Playground for Philadelphia’s Urban Makers – Next City

On Washington Avenue, a Playground for Philadelphia’s Urban Makers 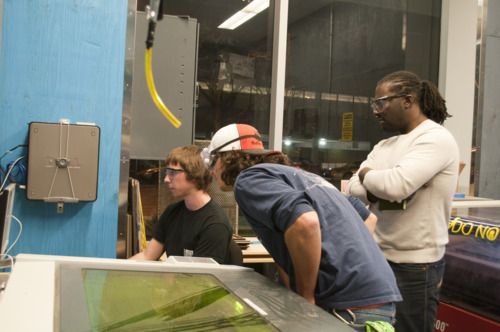 A half-century and more ago, Philadelphia liked to call itself the “workshop of the world.” It was a town that excelled at making all kinds of things: Stetson hats, rail cars, warships, carpets, lace curtains.

The story of Philadelphia’s industrial collapse is an old and familiar one. Factories closed, jobs were outsourced and buildings were abandoned, just as in so many other big U.S. cities. There are some survivors, of course. But for the most part, Philadelphia is no longer a city that makes things.

But in a converted iron workshop on Washington Avenue, there are hundreds of people — amateurs and pros, engineers and fashion designers — laboring to change that.

The place is called NextFab Studio, and it’s a 21,000-square-foot playground for a burgeoning community of urban makers, from hobbyists to artists to entrepreneurs building highly-polished prototypes for new products.

Members, who pay $129 a month (or less, for weekend only access), get access to a breathtaking array of equipment, from high-end 3-D printers, laser engravers and metal-cutting water jets, to (expensive) standbys like table saws and machining tools.

But NextFab aspires to be much more than a warehouse for pricey equipment. “The mission is to reinvigorate the city’s culture and knowledge base for design, fabrication and manufacturing,” said founder Evan Malone.

It’s a freakishly ambitious goal. But looking around the NextFab facility and at the broader trends in the manufacturing world, it’s difficult not to get swept up in Malone’s optimism.

What Malone is creating at NextFab is really a co-working community — like IndyHall or The Coop in Chicago — for people who actually make stuff. There is as much of an emphasis on collaboration and teaching as on the fancy gear. And Malone has filled the place with the kind of creature comforts designed to get members to spend a lot of time at the place: Lounges and big screen televisions, pinball, even a creperie.

Plenty of members have worked with big fabrication equipment before. But many others join NextFab with little technical expertise and only a vague idea of what they want to make and how to do it, said NextFab manager Adam Waraksa.

But that’s okay, Waraksa said, because NextFab is set up to hold its members’ hands a bit, which is probably necessary when the goal is to revive a local making culture that’s largely been dormant for decades. The company offers an extensive array of classes, and there is a large, full-time staff.

Malone said this distinguishes NextFab from similar facilities that have emerged in other cities in recent years. The biggest for-profit national company working in the same space is TechShop, which has facilities in seven cities including Pittsburgh, San Francisco, Raleigh and Austin. But Malone was first inspired by the worldwide network of Fab Labs, a project of MIT’s Center for Bits and Atoms, which are located everywhere from Indonesia and Afghanistan to Flint, Mich. and Deer Isle, Maine.

The Fab Labs don’t have anywhere near the equipment of NextFab Studio (excepting the ultra-sophisticated CBA facility at MIT), but they all exist to serve the same purpose: Give people the means to bring their ideas to physical life, within a community of like-minded tinkerers, artists and entrepreneurs.

“People can always teach themselves, and they always have, but it takes a lot longer and lot fewer people succeed on their own,” Malone said. “This helps more people see their ideas through. It’s just that many more brains building solutions to problems.”

Technological advances in fields like 3-D printing are making that easier than ever. In decades past, creating a prototype of, say, a revolutionary new vegetable peeler, would be simply out of reach for most, both technically and financially. With the technology available at places like NextFab — complemented by the human resources also on site — the barriers for product creation are falling away.

Likewise, these developments are creating a genuine opening for cities to get back into the manufacturing business, albeit in a fundamentally different way than before.

“We’re never going to compete on low cost, mass production,” said John Grady, president of the Philadelphia Industrial Development Corporation, a non-profit joint venture between the city and the Chamber of Commerce. “Places like Philadelphia, Chicago, Boston, New York — these are not low cost places. They are places that are full of amenities and culture and infrastructure, and all those things are expensive.”

But there is more to manufacturing than churning out countless low-cost trinkets or mass-produced t-shirts.

“So Philadelphia won’t make a billion widgets,” Grady said, “but we can make the knee replacement, or the specialized part for a ship.”

And that’s what the other half of NextFab’s business is already doing. In addition to the membership model, the company performs design and fabrication work for companies from GE to local restaurants looking for custom lighting.

If advocates of additive manufacturing (another name for 3-D printing) are right, this is a sector that will, in time, revolutionize production in a large number of industries. And it’s an area where U.S. cities have a competitive advantage.

That optimism is mixing with the first sustained gains in U.S. manufacturing employment since the early 1990s, a trend driven by a wide array of forces, from rising wages in major manufacturing companies like China to increasing transportation costs and changing views among top executives on the value of outsourcing.

Time will tell if U.S. manufacturing is in the early stages of a recovery, or if this is merely a fleeting uptick. But even if the gains are sustained, there are reasons to doubt manufacturing will ever be the employment powerhouse it once was in the U.S.

A company like NextFab is highly unlikely to ever employ hundreds or thousands of workers in a single facility, as did several Philadelphia factories of old. The work is just too automated and too specialized for that.

Malone contends that by making it easier for innovators to create new products and businesses, NextFab and other organizations like them will, in time, generate meaningful job growth as the businesses they help to incubate hatch and grow into their own.

Indeed, NextFab itself got started in the University City Science Center, which bills itself as the oldest urban research park in the nation. The center leases out lab and office space to tech-oriented start-ups, and the 3.5-year-old NextFab worked there until it moved into the old warehouse on Washington Avenue last November.

It’s easy to imagine one of NextFab’s members prototyping a killer new product at the studio, then moving to the Science Center once the product was in hand.

“We’re about getting people to take that first step,” Malone said. “We’re looking for the people who would be hacking away in their garages, if they had garages.”