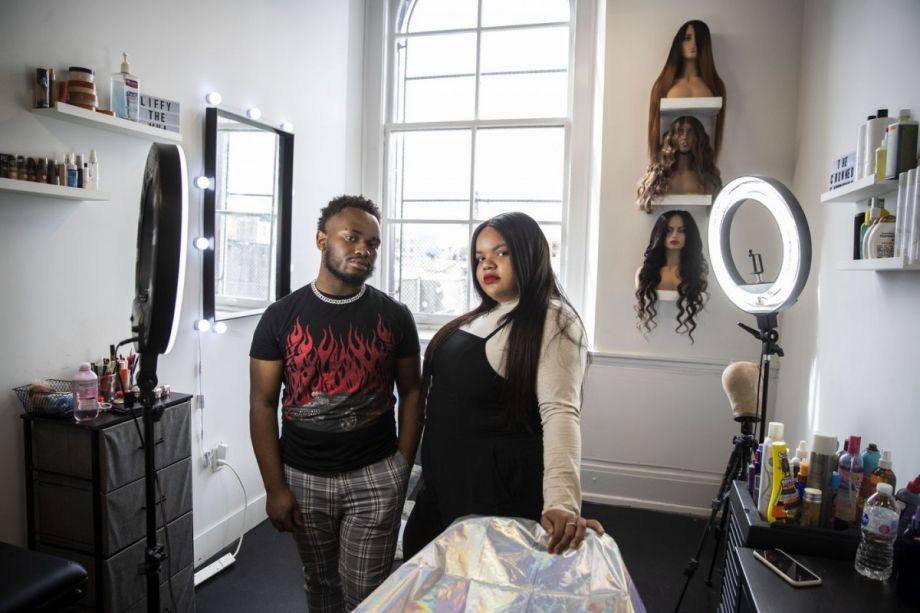 On the first floor of Kreate Hub Philly, Iyonah Stringfield’s chic suite of artisanal hair and personal care studios is slaying it with style.

On the second floor, Amyronn Desvignes-Pope utilizes 3-D printers and a crew of five associates to create, fabricate, and customize ashtrays, keychains, plaques, and all sorts of promotional swag in the headquarters of his Allsides Designs firm.

And on the next floor up, the painter and tattoo artist whose professional name is Elle Lamb — you could say canvas and skin are his chosen media, except he also does clothing — exemplifies the free spirit and eclectic energy at Kreate Hub. This new, affordable workspace in Port Richmond is attracting dozens of ambitious young Black and other entrepreneurs, artisans, and designers from across the city.

“It’s great being in here,” said Lamb, 31, whose paintings and inkwork possess a pulsing exuberance. “This building is full of creatives.”

The pandemic delayed last spring’s grand opening, but ever since Kreate Hub Philly’s Aug. 1 debut, the long-vacant Thomas Powers School has been alive again. The granite landmark at Frankford Avenue and Somerset Street is where young women and men are launching start-ups and scaling up home businesses or side hustles into bigger, bolder ventures. Even in the midst of economic disruption, they’re at work at all hours to meet goals and realize aspirations.

“Before this, I was making designs in my bedroom,” said Desvignes-Pope, 24, who earned an economics degree at Penn State. “I take this work seriously, and being in this building gives a business legitimacy.”

Stringfield, 29, said she chose Kreate Hub Philly “because it fit right into my idea of not having a traditional salon setting.” She wanted a place where professionals such as Milan, a rising star of the Philly makeup scene, “can express their individuality, and their clients can have privacy.” Stringfield plans to add a retail component to her Yon Beauty Supply and Beauty Boutique; the building is already home to a number of other hair and makeup enterprises.

Alison Herdoon, a spokesperson for Kreate Hub, the New York firm that developed the Philadelphia project and opened a similar facility this year in a former Bronx warehouse, said the pandemic has boosted demand for flexible, affordable (Philly rents run from $300 to $1500) and stylish work spaces to accommodate fledgling businesses in urban neighborhoods.

“Kreate Hub is a place where artists and entrepreneurs feel safe and comfortable and able to do their creative work,” she said. “It’s a place they can congregate. We don’t call them tenants. They’re members of a community.”

Previous redevelopment plans called for transforming the former public school into residential condos; Kreate Hub Philly was initially envisioned as primarily a studio space for artists. But entrepreneurs of color from neighborhoods citywide are flocking there after hearing about it through social media and word-of-mouth. The building is about 70% rented and home to more than 60 small firms. There are plans for a cafe.

“We’ve got fashion designers, musicians, creative services companies, and people who make their own skincare products. We’ve got a wonderful wig-maker here,” said Iva Kelman, the manager/curator of Kreate Hub Philly. “We’ve had interest from sculptors, illustrators, and people from other disciplines as well. We welcome everyone.”

Kelman, who lives in Northern Liberties, is an artist herself, and even from behind a face shield, her enthusiasm for Kreate Hub is contagious. The tenants “are young, and they’re fearless,” she said. “They inspire me.”

The school building opened in 1899 and is on the National Register of Historic Places. Its high ceilings, gleaming wooden floors, and dramatic windows foster a bright, airy, convivial vibe conducive to networking. Chance conversations in the hallways or stairwells facilitate collaboration.

Desvignes-Pope is working with Cliff Jeudy, for example, one of the owners of Full-Force, the company that provides security at Kreate Hub. “We’re developing a website to house his business,” said Desvignes-Pope.

Elsewhere in the hub, longtime friends-turned-business-partners Shanna Henderson and Khalif Wilkins are the dual forces behind Echelon Studios. She designs and custom-makes wigs, he’s a makeup artist, and they both do hair.

“Whatever the client wants,” said Henderson, 21. “I’ve been doing hair for a good five years. I was doing hair at Cheyney University. It took going to college for me to figure what I wanted. So I went to hair school.”

Wilkins, who’s 22, said he and Henderson both quit other jobs to launch Echelon on Aug. 1, the same day Kreate Hub opened. They had looked at other spaces, “but none of them were as welcoming,” he said. “Kreate Hub gave us the opportunity to create what we wanted.”

To Jalen Hollerway, a 20-year-old music producer who also performs his own material under the name Smoke, Kreate Hub provides a much needed home base — one with a congenial, but professional, atmosphere.

“I used to work in a warehouse kind of space,” said Hollerway. “Here, there’s no dumb stuff or B.S. I come in and do my work.” Which at that moment was “mixing and mastering a song.”

Two days later, the tune, called “Remember That,” was released.

Being surrounded by commercial and cultural projects or products in constant development helps keep hub members motivated to do their best work, said Desvignes-Pope.

“So we actually put this together,” he said. “I can’t be bored, because I’m doing something new all the time. And sometimes, I cry out of happiness.”

This stroy was originally published in The Philadelphia Inquirer and is reprinted here as part of the SoJo Exchange from the Solutions Journalism Network, a nonprofit organization dedicated to rigorous reporting about responses to social problems.