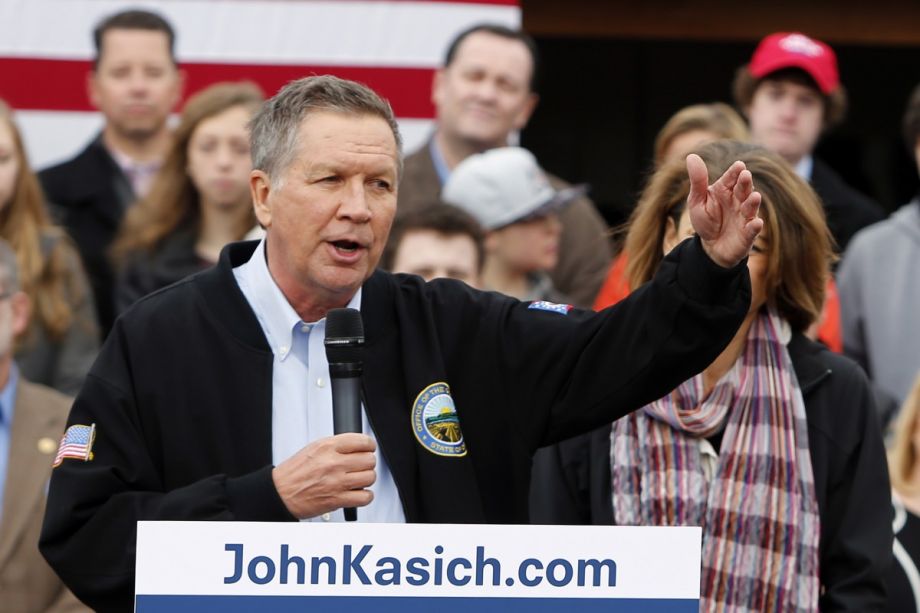 The Ohio primary is this Tuesday, and if Republican presidential candidate Governor John Kasich doesn’t win his home state, he’s likely out of the race for president. In radio and TV ads running in Ohio this week for him, the message is very clear: “Ohio is booming again, and you know he could do the same for America.”

It’s a message Kasich has based his campaign upon, that Ohio has come back from economic turmoil, based largely on the economic development programs and tax cuts under his state leadership since January 2011. He has repeatedly called Ohio “one of the fastest growing states in the country,” and dubbed the transformation the “Ohio Miracle.” He has held the Buckeye State up as a model for Rust Belt recession recovery.

There’s one problem with that message.

According to data from the Bureau of Labor Statistics, Ohio has now gone 38 straight months with job growth below the national average. And a recent report from the entrepreneur-driven Economic Innovation Group ranked three Ohio cities — Cleveland, Cincinnati and Toledo — in the top 10 of the “most distressed cities” in America. It found that 53 percent of the adults living in the city of Cleveland are not working (based on 2013 census data).

Ohio is not only not one of the fastest growing states for job growth, it is stuck squarely in the middle. (It ranks No. 24 in total job growth percentage.) And it begs the questions economists have long held: Do governors have much impact over their state economies, and should they get credit or blame?

“Clearly, over the long term, manufacturing has been struggling, but any comeback in Ohio came from the federal stimulus package and auto bailout [from the Obama administration] because of all the auto parts manufacturing in Ohio,” says Amy Hanauer, executive director of Policy Matters Ohio, an organization advocating for economic equality. “So if [Kasich] is claiming credit for jobs, then maybe he should share some of that credit with President Obama.”

When Kasich says 450,000 jobs have been added in Ohio since he has been in office, that is true. But that number is lower in growth percentage when compared to 25 other states — and that part Kasich doesn’t mention.

“Governors can have influence on education at all levels, which is a long-term investment that does show economic benefits,” says Lee McPheters, an economic professor at Arizona State University who charts statewide economic numbers. “Setting up a good business climate can be helpful, but most of the time there are other factors that are more dominant. Ohio has recovered the number of jobs lost in the recession but was among the last states to do so. So yes, 450,000 jobs gained is good, but to say it is miraculous is a bit of a stretch.”

One policy Kasich has implemented — tax cuts that have dropped the state’s contribution to local governments — has kept the job growth lower according to many local observers in Ohio. That calculates to more than $360 million that cities and local governments haven’t received from the state of Ohio since Kasich took office: Cleveland loses about $21 million annually, Columbus $27 million and Cincinnati $28 million.

But when the Kasich administration calculates job growth/loss, they exclude the public sector jobs lost during the recession (which moves the state’s national ranking up two spots, from 24 to 22). Their reasoning is that these job cuts are part of the tax cut savings, and therefore shouldn’t be seen as an economic loss and not a part of job growth stats.

“What is happening is that every city and county in Ohio is having a fiscal crisis right now, and the job loss in the public sector has slowed down the state economy,” says George Zeller, a longtime Cleveland economist who studies poverty rates and employment levels in Ohio. “But what they are also saying is that the job of a policeman or school teacher doesn’t count so we might as well get rid of them.”

The funding cuts to local government were used to pay down the Ohio budget deficit. But because 1 in 7 jobs in Ohio is in the public sector, their elimination not only impacts services, but also affects the purchase power of those public sector employees in their communities.

“The tax cuts and reducing the funding to local government is doing what was expected,” Zeller says. “It put people out of work who were spending in their communities, and it has made many cities cut essential services.” Zeller points out that Parma, a Cleveland suburb, has lost $4 million a year from the state funding pool, necessitating closing its public pools, not filling openings in its police and fire departments, and charging each household for trash pickup.

Cleveland Mayor Frank Jackson echoed the refrain this week during his state of the city address: “Greatness of a city is measured by the well-being of its people, but without an income tax increase, we will have to lay off employees and cut city services in 2017.” That one-half percent income tax increase will be on the ballot in November.

When Cleveland City Councilman Jeff Johnson hears Kasich laud the economic growth for the state, he says, it “makes me very angry, because he is being very misleading, and he is causing a crisis for Ohio cities where we are going to have to cut basic city services. How can you grow jobs when the cities where you want to grow the jobs are not places people want to live.”

“Some of these governors act like the cities don’t exist,” Johnson continues. “Just like they act like jobs of city workers don’t exist. I don’t know how that all fits into economic growth in Ohio.”