Obama’s Pledge Could Make It Easier to Walk Across U.S.-Mexico Border – Next City

Obama’s Pledge Could Make It Easier to Walk Across U.S.-Mexico Border 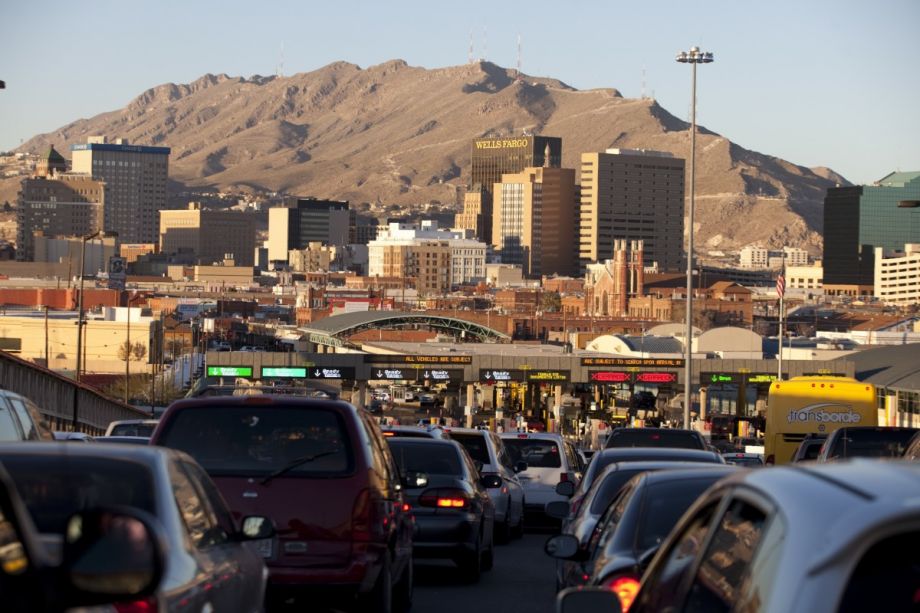 Rush hour on the Paso del Norte International Bridge is similar to urban river crossings everywhere. Cars crawl in traffic while pedestrians and bikes briskly traverse. But there’s one major difference for those commuters: They all need a passport. The bustling pedestrian link over the Rio Grande, between El Paso, Texas and neighboring Ciudad Juarez in Mexico is arguably the most urban along the Southern Border.

While 7.7 million annual pedestrian entries from Tijuana make San Ysidro the busiest U.S.-Mexico port of entry for walkers, the U.S. side of that crossing is a suburban area of San Diego. Paso del Norte, the second busiest pedestrian border crossing with six million entries annually, empties into El Paso’s downtown.

The Texas city and its larger Mexican neighbor (population 1.5 million) have a unique symbiosis.

“For every maquila [factory] in Juarez, one to four jobs are created in El Paso,” says Paul Stresow, El Paso’s director of international bridges. “Mexican customers account for 15 percent of the shopping here.” While some head to the malls and box stores of El Paso’s urban sprawl, crossing at the highway-sized Bridge of the Americas downriver, many merchants depend on Paso del Norte foot traffic.

Along El Paso Street at the foot of the bridge, storefronts blaring banda music sport signs advertising shoes, jeans, perfume, cell phones and clothes, all goods that fetch lower prices in the U.S.

As Juarez cartel violence recedes, the twin cities have resumed the circulation that makes this 2.7-million metro area the largest bilingual, binational workforce in the Western Hemisphere, especially since the 1994 NAFTA agreement that liberalized trade relations between the neighboring countries. But the line on a map drawn by the 1848 Treaty of Guadalupe Hidalgo complicates matters, with a patchwork overlap of federal and local authorities split between two countries and two cities responsible for maintaining public infrastructure at the border.

Originally built as the flat-span Santa Fe Bridge in 1881, the site where downtown El Paso meets downtown Juarez has been a border crossing for at least 250 years, according to Stresow. It was reconstructed in 1967 as an arching span and hosted international bus service until 1973, with international streetcar service stopping a year later.

As El Paso embarks on BRT and contemplates reviving its streetcar network, Ciudad Juarez is implementing the Plan de Movilidad Urbana to repave its battered streets. Reviving transit at the Paso del Norte would be a prime opportunity to improve downtown linkages. No proposal is on the table presently, although Stresow is in favor. “It’s something that needs to be studied and planned for in order to anticipate the future,” he says.

Currently the bridge serves northbound non-commercial traffic — vehicles heading into the U.S. — which means lots of idling cars waiting for Customs and Border Patrol (CBP). Once upon a time crossing was a fluid experience, no worse than a toll plaza (which remains, charging pedestrians a small fare and cars a higher one). That changed after September 11, 2001: Security was beefed up, and now long border waits sometimes stretch to hours at peak times.

“It’s like Mexicans committed 9/11,” gripes Maria Teresa Vásquez, a Mexican citizen who commutes daily from her home in El Paso to the Autonomous University of Ciudad Juarez, where she researches binational planning. “El Paso is a suburb of Ciudad Juarez,” she claims provocatively, citing the population discrepancy, “But decisions are mostly made on the other [U.S.] side.”

When I was at the bridge during a rush hour last October, crossing in a car took nearly an hour and every vehicle left its engine running, which created nauseating fumes for pedestrians and especially vendors who weaved between idling cars selling snacks and gums.

Yahír Ramirez, who said he was a Central American immigrant deported to Juarez, sells pirate CDs to make ends meet. The backups are good for business, but, he said, “there are accidents with the cars, we have to pay attention because it’s dangerous. Every now and then the police come up and give us trouble, pushing us back onto the Mexican side.”

Agapita Perez lives in Juarez but visits her mother in El Paso three times a week with her young daughter. “I wish they had a priority lane for strollers and seniors,” she said. Stresow concedes that the bridge is not ADA-compliant despite 2009 renovations that provided shade canopies for pedestrians and redesigned the entry plaza on the U.S. side.

For its part, CBP has implemented several measures to ease crossing pains. It has partnered with the EPA to evaluate strategies for “greening” the bridges. Wait times are available online, and last month the agency launched a smartphone app with real-time updates. In the 1990s, CBP implemented SENTRI, a program that provides expedited crossing for low-risk travelers.

“The SENTRI lane is almost always empty despite our repeated efforts to get pedestrian border crossers to enroll, especially those who cross multiple times a week,” says Roger Maier, a public affairs specialist at CBP. “Nevertheless this option is consistently underutilized.”

For low-income Juarenses, smartphones and the $122 SENTRI entry fee may be cost prohibitive.

Public health researchers are increasingly concerned about air quality in border communities, especially as NAFTA increased the amount of truck traffic. Hector Olvera, research assistant professor at the University of Texas at El Paso, has studied the nano particles emitted by commercial vehicles crossing the Bridge of the Americas. As for Paso del Norte, which he has not researched specifically, he says, “There’s enough evidence to at least prompt studies. People are exposed at the bridge to consistently high concentrations and they merit that government and academia verify if it’s dangerous.”

If NAFTA helped engender the problem, however, it may also provide a solution. The trade agreement chartered the North American Development Bank (NADB) to fund projects along the border, with air quality a focus area. “We fund road projects under the guise of air quality improvements,” explains Juan Antonio Flores, NADB’s associate director of public affairs. “Unpaved streets are the biggest cause of particulate matter in Mexican border communities.”

NADB lent Ciudad Juarez $30 million for its ongoing urban mobility plan, for example, and could conceivably play a role in future efforts to improve linkages across Paso del Norte, which would be a prime candidate for the all multi-modal no-cars treatment à la Portland’s Tilikum Crossing. As an institution that straddles the border, NADB works with both the U.S. federal government, where the General Services Administration has traditionally funded border infrastructure with some local involvement, and the Mexican government, which allows private concessionaires.

Flores calls the Mexican approach “more progressive” but adds, “a recent U.S. law allows for public-private partnerships and cost-sharing for staffing at ports of entry because of fiscal constraints at the federal level. The old way of doing things, where the federal government paid for everything, doesn’t work anymore.”

For the daily crossers at Paso del Norte, any improvements will be a welcome relief.