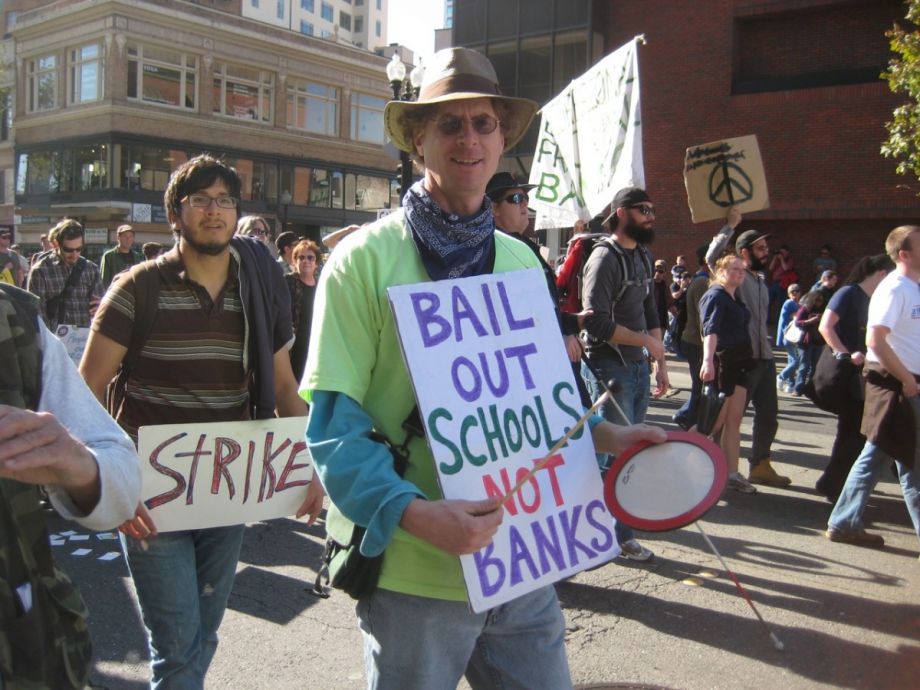 A teacher's sign pushes for school funding during a 2011 Occupy Oakland protest. (Photo by Dan Brekke via Flickr)

In an election with the highest turnout in the union’s history, Oakland teachers overwhelmingly voted to authorize a strike that could start Feb. 15, the San Francisco Chronicle reports.

Eight in ten teachers cast a ballot, with 95 percent voting in favor of the strike authorization, Keith Brown, president of the Oakland Education Association teachers’ union, told the paper.

Teacher pay and class sizes are the sticking point, says the paper. The school district has proposed a 5 percent raise over three years; the union asked for 12 percent. The union is also fighting for smaller class sizes. District officials, the Chronicle says, say they have the second-highest teacher-to-student ratio among the 56 districts in California that have more than 20,000 students.

“There’s no disputing the fact that we value our teachers — they’re the foundation of everything we do here,” John Sasaki, spokesman for the school district, told the Chronicle. “The question is, how much of a raise we can give them given our limited resources? We’re going to give them as much as we can to make sure they can survive and thrive in Oakland.”

Since the teachers’ contract expired 18 months ago, some teachers have already participated in two walkouts not officially sanctioned by the union.

The teachers seem to have broad support. The Oakland City Council unanimously approved a resolution Tuesday supporting the strike, the East Bay Times reported, and students at one Oakland high school are planning a “sick-out” on Friday to support teachers.

Teachers say they’re underpaid, given the high cost of living in the Bay Area. They say that the low pay contributes to the low teacher retention rate in the district, and the school district agrees with that, KQED reports. The average teacher salary in Oakland is about $10,000 lower than the average in San Francisco, for example, and $16,000 lower than in San Jose, the station said.

But school officials, while they may agree that teachers aren’t paid enough, say they just don’t have the funds. District superintendent Dr. Kyla Johnson-Trammell said the district needs to find $21 million in savings this year, ABC7 reported. It may face an even bigger shortfall — $60 million — next year, the Chronicle said. Johnson-Trammell said that without taking precautions to cut costs, the district might have to close up to two dozen schools.

“As both a former teacher and former principal, I understand the frustration of being asked to do so much with so little,” Johnson-Trammell wrote in a letter to families, obtained by the Chronicle. “As a parent of OUSD students, I want all teachers to know how much they are valued and appreciated. As superintendent, I want our teachers to be fairly compensated.”

The union and the school district are still in a fact-finding stage, the East Bay Times said. On Feb. 15, an independent panel will release a proposal based on a review of the school district’s financials. If the union isn’t satisfied with the recommendation, the nearly unanimous vote means the strike could begin immediately.

“This is a clear message that our members are ready to fight for the schools our students deserve,” Brown, the union president, told the Chronicle. “This powerful vote is a mandate for smaller class size, more student support, a living wage, and it is a mandate to keep our neighborhood schools open.”