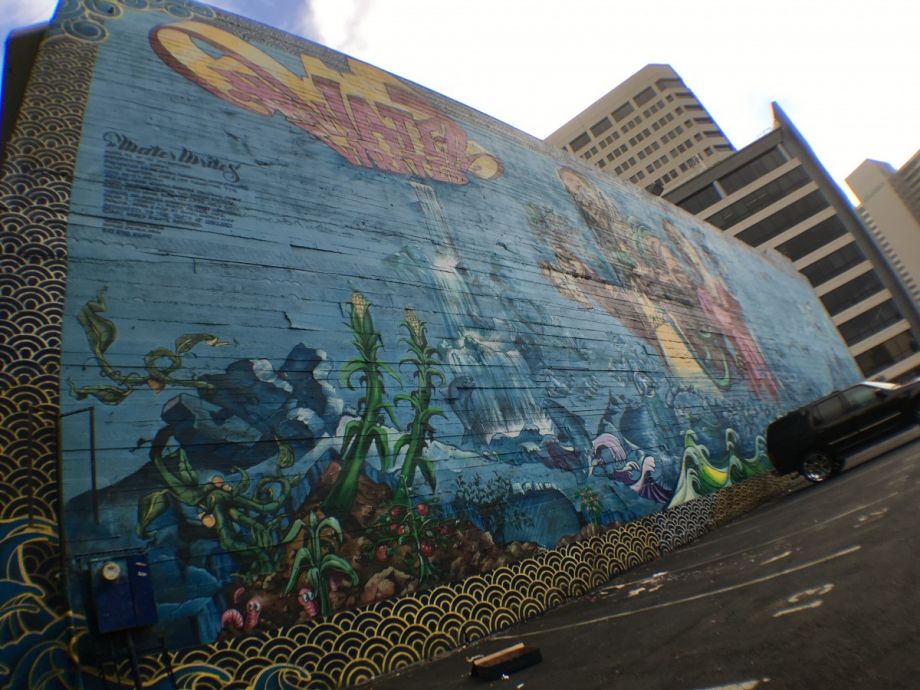 A mural in Oakland (Photo by Oscar Perry Abello)

When Ebele Ifedigbo was growing up on the East Side of Buffalo, Ifedigbo’s father, an architect, would point out the check cashers and the rent-to-own shops as they drove around the neighborhood and the city. Those drives helped to cultivate curiosity about the ongoing economic injustice that undermines black communities in cities everywhere, but Ifedigbo couldn’t have known then that the path would lead to looking to correct that injustice through opportunity in cannabis legalization.

“He would show me all this stuff and he would say ‘these are the things that actually prevent us from being able to build wealth,’” Ifedigbo remembers. “They suck out the resources that we don’t really have.”

The wealth disparity today: Median net worth for white non-Hispanic households ($132,483) is 14.6 times the median net worth of black households ($9,211), according to figures released this month by the U.S. Census Bureau. Ifedigbo’s curiosity about this injustice led to studies at Columbia University, work in the financial and nonprofit sectors, and a degree from Yale’s business school.

“We can talk about political power, social power, all of those are important, but for me I feel like economics is the foundation for those other things to stand sturdy and be sustainable,” Ifedigbo says. “When I went into business school I was thinking, can business serve the ends of social justice, and if so, what would that look like?”

The path toward an answer came sooner than Ifedigbo expected, in 2015, when a wave of pot legalization began to spread across the United States.

“The War on Drugs has been decimating our communities for decades, and even racist drug policy before that has been disenfranchising our communities, and now here we are at this moment where that same exact plant is now legalized and people are making millions and billions off it,” Ifedigbo says. “We got to figure out a way to get our people on that path.”

As co-founder and co-director of the Hood Incubator, a cannabis industry incubator designed to cater toward cannabis entrepreneurs of color, Ifedigbo was announced last week as a member of this year’s cohort of Echoing Green Fellows. The fellowship gives Ifedigbo some runway capital and access to networks of previous fellows, other potential advisors, funders and investors to help grow Hood Incubator.

Ifedigbo and co-founder/co-director Lanese Martin, along with co-founder and lead community organizer Biseat Horning, have a vision for a national network of Hood Incubators that will tap into the growing cannabis industry as a force for social justice on multiple fronts.

“We recognized there’s no accelerator or real hands on direct pipeline to get our people in the cannabis industry and actually start a business,” says Ifedigbo.

Funding for Hood Incubator has so far come from individual donations, grants from foundations and also from the Drug Policy Alliance, and local industry sponsorships. “What’s special about Oakland and why it’s great we started there is not only is the community well-organized around social and political issues, but the mainstream cannabis industry is pretty organized around Oakland and they’re pretty cognizant about this issue,” Ifedigbo says.

Another reason the co-founders chose to pilot their first Hood Incubator location in Oakland is the city’s Equity Permit Program. It’s part of the city’s broader vision to be intentional about carving out a pathway into the legalized cannabis industry for those who have been systematically targeted by the drug enforcement policies of the past.

Under the Equity Permit Program, half of all cannabis industry permits issued will be reserved for Oakland residents with an annual income at or less than 80 percent of Oakland area median income (adjusted for household size), and who live in one of a predetermined set of police precincts where previous cannabis arrests have been historically concentrated — and were arrested after November 5, 1996 and convicted of a cannabis crime committed in Oakland. The equity permit applicant must be at least a majority owner of the business. The city opened the equity application process about two weeks ago.

That equity permit carve-out is a temporary measure, which the city intends to keep in place until its full Equity Assistance Program for the cannabis industry is funded and implemented. Through that initiative, the city intends to eventually provide applicants with financial and technical assistance, including zero-interest business startup loans.

It’s early days yet for Oakland’s equity permit program and the overall cannabis permit program. (San Francisco also recently announced its own measures for its cannabis industry regulations and support.) There are still some kinks to work out, but Ifedigbo is confident that the city will maintain open lines of communication to improve things as they go along. That includes a mandated six-month check-in on the equity permit program.

The first cohort of 15 Hood Incubator fellows was chosen from an applicant pool of 40, and began intensive business courses in January. They completed about 100 hours of instruction, and ended up with a business plan, preliminary financial projections, and a rehearsed pitch presentation — which each fellow delivered to investors, community members and potential customers assembled on Hood Incubator’s inaugural pitch day, on May 6. Ifedigbo says they hope future cohorts will include fellows who are are eligible for Oakland’s equity permits.

While it’s common for incubators or accelerators to take partial ownership position in cohort businesses, Hood Incubator chose not to do so for its first cohort. Ifedigbo says they are considering that for the next group. But Hood Incubator’s vision for equity also extends to potential cannabis industry investors. They’re hoping that mostly white, mostly male venture capitalists aren’t the only ones having all the fun and reaping all the returns from investing in a tremendous new industry.

“We made an effort to bring people in the community who might not always think of themselves as investors but they have capital to deploy,” Ifedigbo says. “Some of the pillars of black communities have been hair salon owners, barbershop owners, small mom-and-pop shops who have had presence in the community and they might have a little extra, whether it’s $10,000 or $5,000 or $25,000, to deploy and support other businesses.”

In addition to supporting cannabis industry entrepreneurs of color around the U.S., Hood Incubator’s vision for national expansion includes rallying more of these community-level investors, you might call them friends and family, to back cannabis industry entrepreneurs of color with capital as well as mentoring and other support as fellow business owners. Some of these community-level investors may even have customer networks to share.

“It’s about how do we corral the community assets that already exist to continue investing in that community,” Ifedigbo says.

Correction: A previous version of this article incorrectly stated that some Hood Incubator fellows were eligible for Oakland’s equity permits.