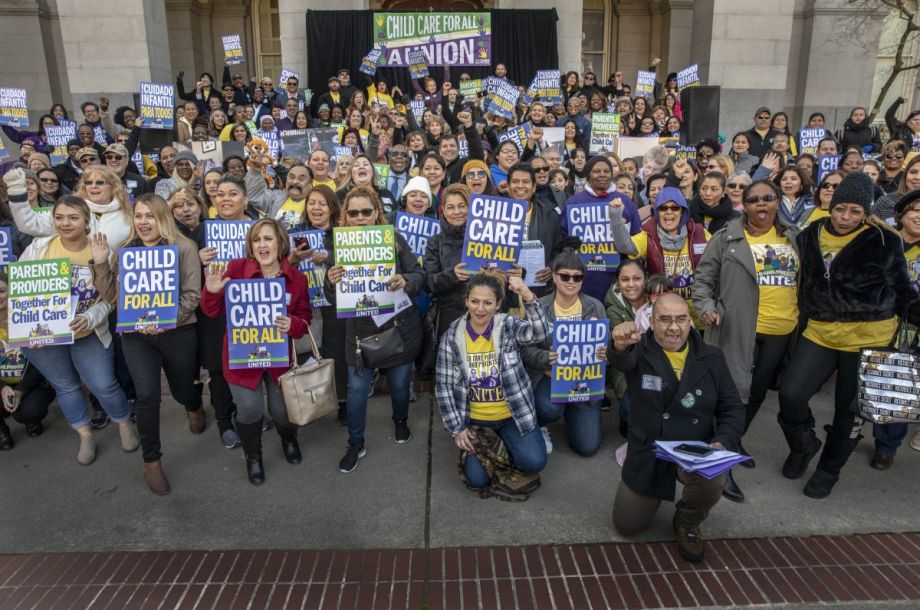 Hundreds of childcare providers and supporters rally in Sacramento in February, calling for the passage of a bill that would allow childcare workers to bargain collectively. (Photo courtesy SEIU)

When the nation’s first minimum wage laws passed in the 1930s as part of the New Deal, they included landmark protections for workers such as prohibiting child labor, establishing a 44-hour work week and permitting collective bargaining. They also excluded professions dominated by women of color — domestic work and agriculture. Those exclusions continue to this day. Labor organizers in the Bay Area, however, have mobilized to level the playing field and ensure that the women who provide childcare are receiving a living wage.

Faced with the economic pressures of ballooning housing costs in the San Francisco Bay Area, home-based childcare providers, who are not covered by minimum wage regulations, have mostly fallen through the cracks. “Over the years, we’ve heard many stories about parents losing jobs not being able to pay their [childcare] providers. Providers having to take second mortgages or losing their homes,” says Clarissa Doutherd of Parent Voices Oakland. “With the housing crisis, things have really come to a head,” she explains. Over time, Doutherd says, it became clear that African-American women in Oakland were being particularly impacted.

To deal with this, Parent Voices Oakland, a grassroots group of parents advocating for childcare in the Bay Area, teamed up with the Service Employees International Union and AFSCME, the municipal workers’ union, to organize the people — mostly women — providing childcare to families across the Bay Area. Last year, the movement lobbied the governor and narrowly lost an Alameda County-wide ballot initiative. That initiative called for a half-cent sales tax to fund childcare services, both to increase the number of slots available for children up to 12 years old while also increasing the rate paid to providers. Doutherd estimates the initiative would have raised $140 million per year.

Nancy Harvey is one of the childcare providers who campaigned hard for the initiative. Harvey is an African-American woman who grew up and raised her own children in Oakland. For years, Harvey taught in a private, Catholic elementary school. “When children were entering kindergarten, it appeared to me that more African-American and Latino children were not testing well and were having difficulty getting into private schools,” she recalls. Harvey says she knew that the issue had to do with exposure to early learning opportunities, so 15 years ago she decided to make a move.

“When you walk in, you know you’re in a classroom. You don’t necessarily know you’re in my home,” Harvey says of her three-story Victorian house, where she runs Lil’ Nancy’s Primary Schoolhouse. The environment is geared toward interaction and learning, and Harvey shuns the videos often used to babysit small children. The Schoolhouse serves 12 children between infancy and four and a half. “My two-year-olds know their alphabet. My two-year-olds can count to ten in Spanish,” Harvey says with pride.

In spite of this, Harvey says she has struggled to pay her staff and cover her costs. She told Capital Radio that she has no retirement savings. “I do a damn good service for my community yet I am struggling. What is wrong with this picture?” she asks. When an SEIU outreach worker knocked on Harvey’s door and asked how she was doing, Harvey seized the opportunity to help push for change.

For Alexa Frankenberg of SEIU, the momentum that Fight for $15 minimum wage campaigns generated enabled union organizers to start focusing on people who had been left out of those successes, such as childcare workers. “We looked at home-based childcare providers or centers that rely on state funding, which had been frozen for years,” Frankenberg says.

At the same time, providers like Harvey who employ staff members now had to meet a higher pay rate for their workers without the benefit of a state increase in the homebased childcare reimbursement rate. “So, they end up paying themselves less,” says Frankenberg. SEIU represents approximately 10,000 people who provide childcare services in California and 70,000 nationally.

This year’s budget proposal from Governor Gavin Newsom includes increases in childcare allocations. But Frankenberg notes that both Governors Brown and Schwarzenegger vetoed measures that would have allowed childcare workers to bargain collectively.

The model for childcare workers organizing collectively came from Illinois in the mid-aughts. Frankenberg says that 11 states currently allow home-based childcare providers to bargain collectively. (In general, home-based childcare providers work as entrepreneurs and haven’t been viewed as a workforce to organize.) She hopes that California will join the list this year. Assembly Bill 378 had its first hearing in early April.

Parent Voices Oakland has been raising alarms about the childcare issue, particularly as it affects families who are waiting for care slots, for nearly a decade. Doutherd says she called parents on the waiting list for childcare spots. “I was hearing horror stories about them either having to give up a job opportunity. Some of these mothers were living in their cars or in shelters because they didn’t have access to childcare,” Doutherd recalls. “The thing that they wanted was to work and to know that their children were safe,” she says. Doutherd says the state wasn’t providing enough funds to create slots for children from low-income working families, and those families don’t earn enough to pay for unsubsidized care.

That’s why Parent Voices Oakland and the rest of the coalition are pinning their hopes on the county ballot initiative, which the groups aim to get back on the ballot in 2020. “What’s incredible about this initiative is traditionally provider wages and childcare slots have been pit against each other because the pie is so small,” Doutherd explains. She says the Alameda County ballot initiative is “at the vanguard” of childcare providing because it takes a comprehensive, revenue-raising approach to the matter.

“Piecemeal solutions, incremental solutions at this point, are not going to be helpful in ensuring that our children are healthy and that our families are able to stabilize themselves economically,” Doutherd says.