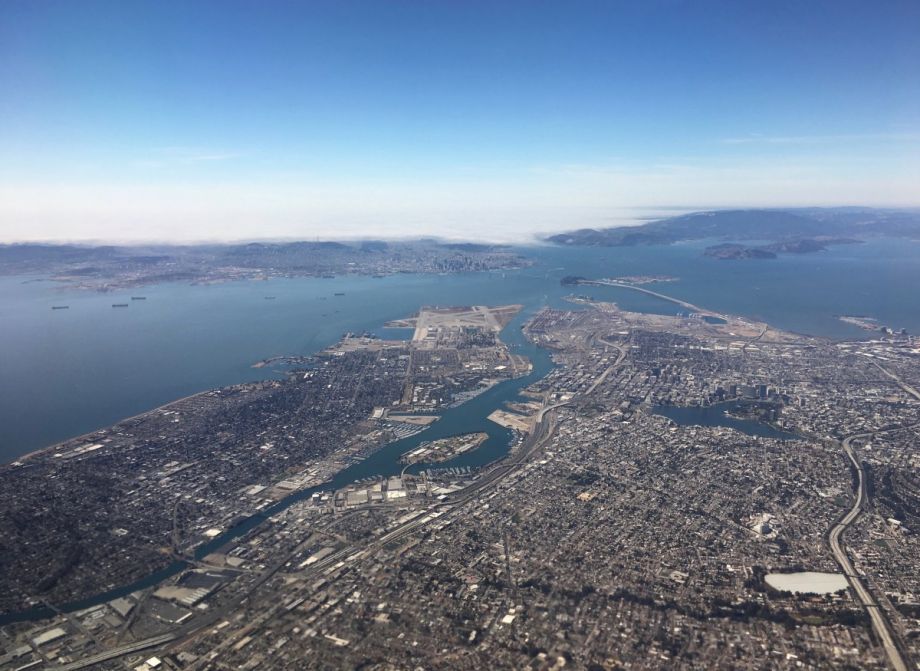 The Bay Area, with Oakland in foreground (Photo by Oscar Perry Abello)

Jose Corona’s father, Jose Sr., emigrated from Mexico to Watsonville, California, where he eventually became a strawberry farmer. He started with 1 acre, then 2, investing a little at a time and growing the farm, creating jobs for other immigrants.

“I really saw firsthand with my dad what it meant not only to grow a business but also grow it in a way that benefits his employees,” Corona says. “I often refer to my dad as a social entrepreneur before it was trendy. He paid his employees well, better than surrounding farms. He helped some of his employees start their own farms. I saw a community be supported by one business.”

Those memories and lessons have stuck with Corona throughout his career. In 2004, working in the nonprofit sector in the Bay Area, he was recruited to take over what was then Oakland Advisors, part of a small national network of organizations focusing on inner-city communities and businesses started by Harvard Business School professor Michael Porter. Its mission was to provide pro bono advice and technical assistance to help business growth and job creation in Oakland. Corona added his own spin, rooted in the values and vision he remembers from childhood.

“We [became] very selective on the companies that we work with,” says Corona, who’s now director of equity and strategic partnerships for Oakland Mayor Libby Schaaf. “It was not sufficient for them to create a job for job’s sake, but good jobs, good pay, good benefits and also good culture. Do they provide the right working environment for people to thrive and work with dignity? That became a big tenet of our work.”

Oakland Advisors became Inner City Advisors (ICA), which later became ICA Fund Good Jobs, and it celebrated its 20th anniversary last November. At that point, it had served more than 500 entrepreneurs, helping them create more than 5,000 jobs, and more than $65 million in employee earnings in the Bay Area. Focusing on quality jobs is becoming a trend among community development financial institutions (CDFIs), which is why ICA Fund Good Jobs was one of five CDFIs featured in a new report, Reducing Income Inequality: How CDFIs Promote Job Quality, from the Opportunity Finance Network, a nationwide network of CDFIs.

OFN commissioned its report to help all CDFI small business lenders and CDFI investors develop an understanding of practical approaches and tools they can use to promote quality job creation. The report compares and contrasts various aspects of each CDFI’s model for creating quality jobs, starting with their definitions.

There are many definitions of a quality job, but the report uses five elements as a springboard for discussion: a living wage sufficient to support a decent standard of living, or at least one that is higher than the median in an employer’s industry; basic benefits that increase economic security, improve health and promote work-life balance; career-building opportunities; wealth-building opportunities; and a fair and engaging workplace.

“Our definition has evolved a lot,” says Sean Daniel Murphy, now CEO of ICA Fund Good Jobs. “A definition is good, but it’s not enough. This space has definitions and metrics, but there’s also learning from the community.”

ICA Fund Good Jobs’ definition has some overlap with the report’s definition: a living wage, benefits, a supportive culture, opportunities for advancement such as social networking and career ladders. But, as a result of constantly staying in dialogue with its target communities in west and east Oakland, its definition now also goes beyond. For ICA Fund Good Jobs, a quality job by definition includes employment access to those who face barriers to employment, such as race, disability, gender or a criminal background.

“Location and geography is not sufficient, socioeconomic status of individuals, who we’re providing access to good jobs, is ultimately the pathway to a more equitable community,” Murphy says.

ICA Fund Good Jobs is one of the newer CDFIs included in the report (the newest being Growth Opportunity Partners, which I covered last year). Murphy actually left ICA in 2013 to spin off Fund Good Jobs as a new CDFI that would invest in businesses that came though ICA’s pro bono business advisory services. The organizations merged in 2015, under Murphy’s leadership, after Corona left to join the mayor’s office.

“One of the biggest barriers to companies’ growth and creating good jobs was access to capital,” says Corona. Banks and credit unions in the Bay Area simply weren’t providing enough of the growth-friendly capital ICA’s pipeline of businesses were looking for. Other CDFIs, meanwhile, were only providing microloans — typically $50,000 or less — that also did not meet demand from ICA’s network of growing businesses. Corona says they also approached the Bay Area’s famous venture capitalists, but they weren’t interested in investing in inner-city businesses like those in ICA’s network.

“We never wanted to start a fund,” says Corona. “We went to other providers, and wanted to work with them to help them meet the needs of our companies. We got shut down every single time.”

In the end, having their own fund turned out to be another useful tool to help encourage the entrepreneurs in their network to stay committed to creating quality jobs for employees. They’ve even included clauses in their loan agreements that reduce interest on loans when portfolio companies show they have been taking steps to make sure new job opportunities are advertised first to ICA’s network of workforce organizations that provide training to individuals with barriers to employment.

“It’s a very concrete carrot we can use,” Corona says.

They’ve got five businesses in their $2.5 million portfolio, currently. Overall, for every dollar they’ve invested, they’ve also leveraged $14 from other investors or stakeholders in each business. At times, it’s simply taken their own willingness to invest in a business to convince others.

One of their portfolio businesses, Firebrand Artisan Breads, moved into a second and much larger location thanks to the $2.5 million in capital ICA Fund Good Jobs invested and helped them raise from others. They went from 12 employees to 56, almost instantly. Another, Back to the Roots, an organic food company, started a crowdfund investment campaign last year and ended up with a $10 million venture capital round. As their portfolio companies grow, ICA Fund Good Jobs is betting that the good jobs culture it helps them establish in their early days becomes an essential part of the business.

“It’s part of the risk that we take on. Some people bet to get their money back, we bet to ensure that good jobs will stay there,” Murphy says.

Helping companies in its portfolio expand is no longer the only way ICA Fund Good Jobs furthers impact. Corona has taken the same underlying philosophy with him into his new position in the mayor’s office.

“It’s a new position the mayor created, looking at what I’ve done at ICA. She wanted me to come and do it on a larger citywide scale, to look at policies and other changes to enable companies to grow and create good jobs in Oakland,” says Corona.