NYCHA’s Sitting on Thousands of Square Feet of Business Opportunity 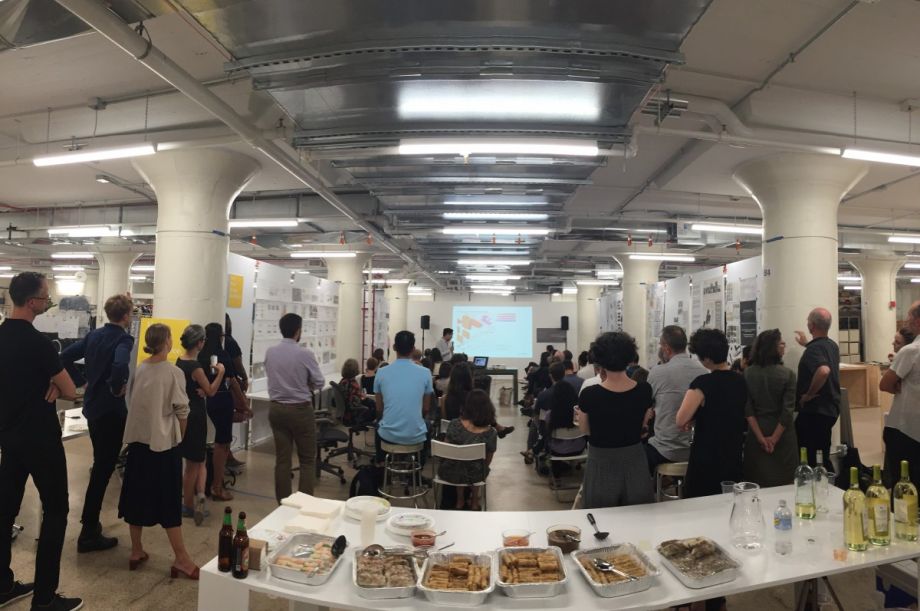 Stephen Fan presents his proposal to create a network of incubators and makerspaces for NYC public housing residents. (Photo by Oscar Perry Abello)

The last time I spoke with architect Stephen Fan, he was preparing to open a museum exhibit on how an immigrant community was transforming their adopted hometown in suburban Connecticut to meet their own more walkable, more flexible, more urban needs.

As one of 11 summer residency fellows at the Institute for Public Architecture (IPA), Fan got to explore how another historically marginalized community is transforming their environment (or, as he sometimes likes to say, appropriating the environment).

This time, Fan says, “I was interested in the informal sector in NYC, and the informal businesses in NYCHA housing, which can range from kitchens to crafts to childcare and more.”

As a fellow he had six weeks starting in July to create workable solutions that could lead to a pilot project for the development of affordable live/work space for artists and entrepreneurs in buildings currently zoned for light manufacturing use.

“Currently zoned for light manufacturing use” might seem like ponderous phrasing, but the reality in NYC today is that many manufacturing sites have spent years vacant, a shocking number of manufacturing sites have been turned into hotels (a quirk of NYC zoning regulations), and many were lost to luxury housing developers under Mayor Mike Bloomberg’s administration. Nearly all the gleaming new luxury waterfront high-rises in Brooklyn and Queens are built on sites that developers got the city to rezone from manufacturing to residential.

Those luxury developments, in turn, put upward pressure on rents in the surrounding neighborhoods, whose names are now synonymous with gentrification and displacement: Williamsburg, Greenpoint and Long Island City.

“It’s pushing out people and jobs,” says Nadine Maleh, IPA’s executive director. “We wanted to explore how do we create development on M1 sites that does not create displacement.”

This week, Fan’s team made their formal proposal: Create a network of business incubators inside or adjacent to New York City Housing Authority residences, which would be tailored to or even exclusively reserved for NYCHA tenants.

“Imagine the number of NYCHA residents who are not able to achieve their full economic potential because of the lack of resources and opportunities,” Fan said in the presentation.

NYCHA has some major assets that could be leveraged as part of a business network. First of all, there’s the entrepreneurial residents. Incubators, Fan said, could help formalize their informal businesses while also addressing NYCHA’s concerns over the legality and safety of those home-based enterprises.

NYCHA’s second greatest asset, Fan explained, is space. In his research, Fan estimated that there are 163,000 square feet of unused space across 47 vacant community facilities on NYCHA properties. At least one, in Brooklyn’s Marcy Projects (childhood home of Jay Z), has been vacant since the 1970s, according to Fan. In addition, Fan noted that many NYCHA communities are adjacent to vacant or underutilized M1 buildings and lots.

According to Fan, NYCHA could activate spaces inside or adjacent to NYCHA housing by partnering with outside organizations that have experience running incubators. Philanthropic resources to support incubators could come through the Fund for Public Housing, NYCHA’s newly created affiliate nonprofit. Public resources could come from the NYC Economic Development Corporation (NYCEDC). Fan pointed out that NYCEDC has provided support to launch a number of incubators in recent years, but they’re often located in resource-rich neighborhoods.

As a case study, Fan chose Brooklyn’s Brownsville neighborhood. Fan said that Brownsville is home to the highest concentration of public housing in all of North America, while also being well-served by public transit. The East New York Industrial Business Zone is not far away, either, providing an easy option for businesses that outgrow a NYCHA incubator.

At the same time, in speaking with community development organizations, nonprofits and others in Brownsville, Fan heard that many Brownsville residents have been calling for promoting entrepreneurship and small business creation, as well as designating a new manufacturing zone within the neighborhood.

Fan proposed two test sites for incubators containing offices and designated makerspaces, one in a NYCHA parking lot and one on a city-owned site abutting a major street with elevated subway tracks.

Flexible spaces are crucial. Fan emphasized the importance of supporting both new and existing businesses, as well as businesses started for different needs — some that will never be more than a form of supplementary income as well as opportunities to scale. A good mix, he said, could also create connections for training and mentorships.

As part of the fellowship, IPA arranged meetings for teams with relevant city agencies that may play a role in implementing elements of teams’ proposals. It’s still too early to tell if those conversations will amount to anything, Maleh admits, but these proposals could shape future requests for proposals to develop programming, or future policies.

“I think with [Steven Fan’s] research and proposal there’s a few different ways it could create impactful change, whether an RFP, a pilot or a program development in an underutilized NYCHA community center,” Maleh says.