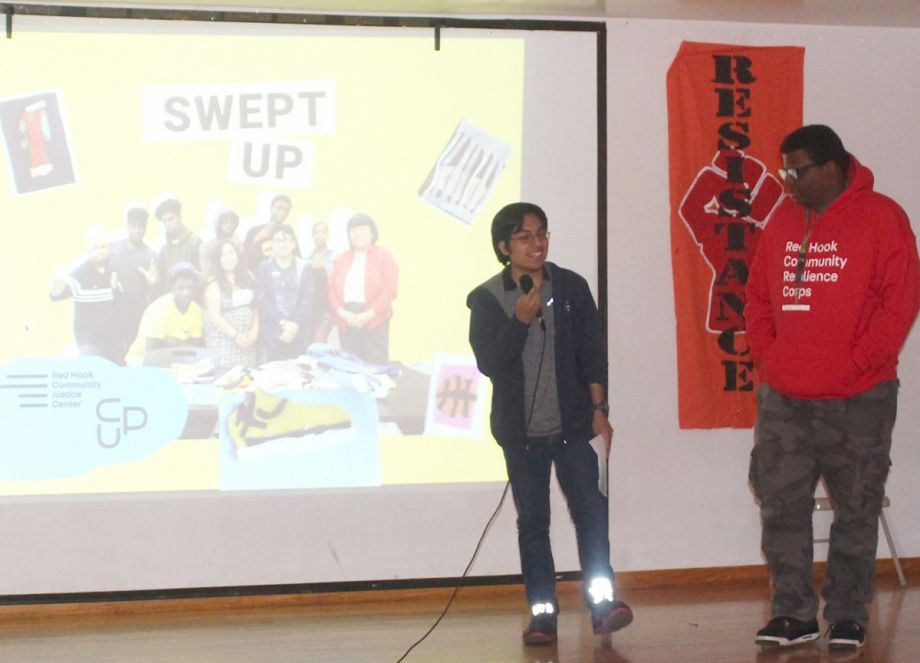 Amid twinkly lights and folding chairs in a Brooklyn event space in early October, two teens stood between blue and red banners reading “resistance.” They explained to the audience concepts so complicated and heavy that they’ve escaped many New Yorkers: criminal conspiracy laws and the New York Police Department’s secret gang database. Together, both have contributed to a rise in mass gang indictments across New York City.

The youth, Antonio Rivera and Devon Minns, talked about how the increase has impacted their lives while growing up in Red Hook, Brooklyn: parents too afraid to let their children go outside and socialize, a hesitation to make friends when “guilty by association” can be a serious crime in the eyes of the police.

“I’ve learned to just be careful about what you wear and who you’re around,” Minns told the audience. “All of that can get misconstrued.”

Rivera and Minns were two of the 11 students who participated in a summer employment program at the Red Hook Community Justice Center, the nation’s first multijurisdictional community court. The cohort worked with the Center for Urban Pedagogy, a nonprofit using design and art to explain complex social justice issues, to compose a booklet explaining how criminal conspiracy laws impact New York communities.

The booklet, titled “Swept Up,” begins with a short description of a Bronx raid that brought criminal conspiracy laws into question. In April 2016, the NYPD raided two Eastchester housing complexes and arrested 120 people. Described by the NYPD as the “largest gang takedown in New York City history,” the raid devastated the community, and over half the arrestees were never even charged as gang members. Through “Swept Up,” the students posed a question: “How did all this happen?”

Like the Bronx, Red Hook, where the students worked, has a concentration of public housing and high police presence. They spent the summer researching, and conducting interviews and community surveys. “Questions we kept in mind are: What are criminal conspiracy laws? What is the NYPD gang database? And how do these laws and practices affect local communities?” Rivera said at the October event.

As “Swept Up” explains, criminal conspiracy laws emerged from the 1970 Racketeer Influenced and Corrupt Organizations (RICO) Act to target the mafia and organized crime. The NYPD has increasingly used these laws in racialized ways, first to target political organizations of color like the Black Panther Party and then low-level street crime. As the department phased out stop and frisk (the policy was ruled unconstitutional in 2013), it started to rely on RICO-fueled conspiracy charges to carry out mass gang indictments.

To understand how these gang indictments work, the Red Hook students tried to define what, exactly, makes a gang. Through interviews, they found the NYPD does not have any set definition of gang activity or who is a gang member — “A gang itself is just a group of people, which isn’t legally a crime in itself,” graduate student Priscilla Bustamante told the students in an interview.

The students also considered the NYPD’s secret gang database, a list of roughly 18,000 New Yorkers designated as gang “involved” or “affiliated.” The database is 99 percent black and brown men. (The NYPD, which does not alert those it lists on the database, has acknowledged the racial disparity, but has said the database reflects patterns of gang membership, not police biases.)

This database is a major tool used in criminal conspiracy investigations and mass arrests. According to “Swept Up,” “to convict someone of a conspiracy, prosecutors only have to prove that a person is associated with a gang, and committed a crime as part of the gang’s activities.” For example, if the police claim someone is a gang member, and they’re found guilty of selling marijuana, prosecutors can also charge that person for crimes committed by other gang members. The police can also use everyday situations, like giving someone a ride, as evidence of connections to criminal gang activity.

Simply put, RICO makes it easier for prosecutors to build a case and tie individuals to criminal groups — and ultimately threaten them with severe penalties.

Research shows that raids based on criminal conspiracy contribute to unnecessary arrests. In the April 2016 Bronx raid, fewer than half of those arrested were ultimately alleged to be members of the targeted gangs and most of the 120 were not convicted of violent crimes, according to an extensive report by the City University of New York Law School.

A documentary titled “Raided” shows the devastation in the aftermath of the raid, which saw nearly 700 officers in riot gear go into people’s homes and remove mostly young men from their communities. The students used both the report and documentary for research, while also surveying Red Hook residents about their awareness of conspiracy laws and the gang database. Sixty-one percent of respondents had never heard of criminal conspiracy laws, the students found.

The group worked with teaching artist Ro Garrido to create artwork based on their findings, and designer Marcela Szwarc to create the “Swept Up” booklet.

“A lot of the process is giving students space for agency, whether that’s creating artwork or speaking with community members,” Garrido says. They created fabric artwork as a way to reflect their identity, and designed cards, based on the Mexican card game Lotería, with images portraying the impact of the criminal justice system. The artwork was integrated throughout the booklet, alongside quotes from stakeholder interviews and the students themselves.

Since the Bronx raid, police have executed some 250 smaller sweeps across the city. As an alternative to mass roundups, “Swept Up” suggests the conspiracy law could be applied as intended — against mafia or white-collar crime — and that communities impacted by gang targeting should be invested in, rather than further criminalized. “We should be reinvesting in … education, employment, housing, basic human needs to address the root causes of why people are committing any crime in the first place,” Bustamante told the students. “Swept Up” also promotes community-based “cure violence” programs and restorative justice to address harm effectively.

The students see “Swept Up” as a first step, a way to increase education and awareness around complicated laws and the secret database. As one of them is quoted in the booklet: “You can’t really make a change to the laws, but you can change and educate people on their rights.”