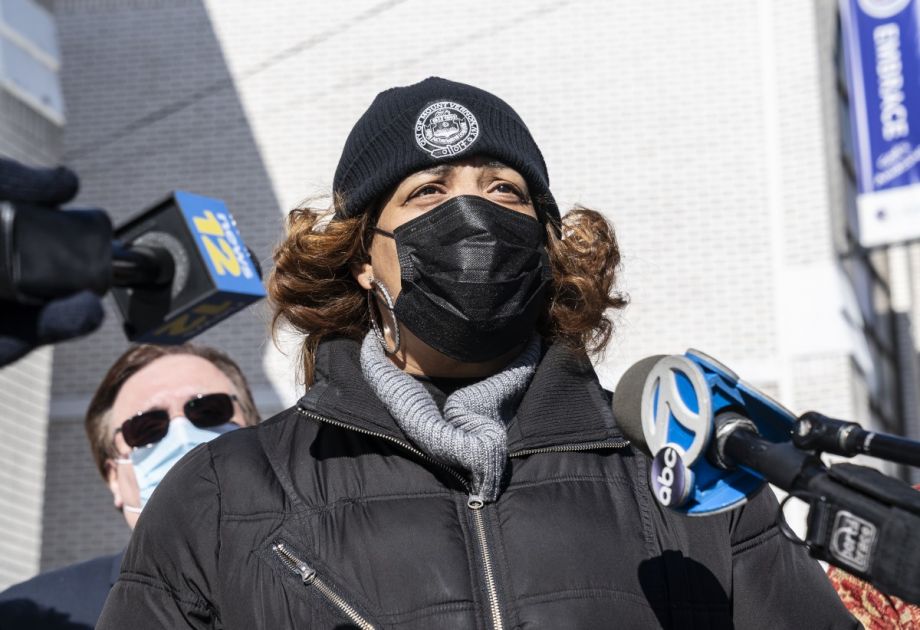 In this file photo, Mount Vernon mayor Shawyn Patterson-Howard speaks to the press at a pop up vaccination site on February 4, 2021. Photo by Lev Radin/Sipa USA)(Sipa via AP Images)

Shawyn Patterson-Howard, mayor of Mount Vernon, New York, is a fifth generation Mount Vernonite. As long as she’s lived there, the New York City suburb has been two distinct sides of the Metro-North Railroad tracks: The south side of the tracks became more Black and more disenfranchised as the northside became a bedroom community for white Manhattanites during the “white flight” of the ‘70s and ‘80s.

“In [the south side] there has been a lack of investment,” Patterson-Howard says. “The most blighted part of our community has been allowed to sit largely vacant and deteriorating for over 20 years.” She has set out to begin to change that by developing a few blocks locally known as The Hilltop with affordable housing for everyone from working class families to seniors and young professionals.

“Mount Vernon has not had a comprehensive plan since 1968. We have not kept up with the same level of investment in [all of our] communities,” she says. In order to be able to afford to stay in Mount Vernon, many working-class families and families of color have had to “double up,” as Patterson-Howard puts it, and live with other family members.

Dennis Hanratty, the executive director of Mt. Vernon United Tenants, agrees. “Mount Vernon has been hurt because of poor long-term planning years ago,” he says. “If we build more affordable housing, we can let a little air out of the tires so to speak. People can get out of doubling up if there are more affordable housing options.”

The method for investing in The Hilltop has been largely influenced by Patterson-Howard’s involvement in the inaugural Just City Mayoral Fellowship, a collaboration between the Mayors’ Institute on City Design and the Just City Lab at Harvard’s Graduate School of Design. Each of the seven participating mayors are tasked with selecting a predominantly Black, under-invested neighborhood in their community for which they receive guidance and consultation on planning and design interventions that center racial justice.

In Mount Vernon, those interventions center around housing. Patterson-Howard plans to develop housing for families and individuals making between $40,000 and $80,000 a year, based on the city’s median household income which is just under $60,000 a year. Patterson-Howard is envisioning about 500 housing units across 21 parcels of land, 11 of which are owned and controlled by the city, although much is still on the table pending Patterson-Howards upcoming Just City work. The units will likely comprise studios, one, two, and three bedrooms. Roughly 100 of those units will be for seniors while others will be geared towards young professionals. “We don’t want all of our young professionals to move to Connecticut,” she says. “We want them to stay here until they get really grounded and maybe purchase a home as well as have opportunities for seniors who are selling and looking to downsize.”

Prior to her participation in the fellowship, Patterson-Howard was thinking of selling the city-owned land to developers — something that the Just City Lab cautioned against. “Really, our participation allowed us to pull back and totally rethink the process and how, as a community, we can take more leadership in the development of this project as opposed to just selling the land… and ensure that the community is involved in this conversation,” she says. Now, the city is considering long-term leases and land trusts, so that the city retains ownership and has more of a say in what the hilltop’s transformation will look like. Moving forward, Patterson-Howard will receive two consultants to help the city move through the process.

The project won’t be without its challenges, of course. The neighborhood’s sewer system is antiquated, so it will likely have to be retooled in order to handle the increase in density. Because the neighborhood has been designated as a designated urban renewal zone and economic empowerment zone, it’s eligible for federal and state funding, so Patterson-Howard is optimistic about making ends meet.

The other challenge she’s gearing up for is a conversation about gentrification. “People want to blow a dog whistle — they’ll say ‘Gentrification! Gentrification!’” she says of those who often push back against affordable housing while living in affluent areas. “There’s not housing in this area right now. We’re not taking current housing and changing it to market rate. We’re investing in a neighborhood that’s been abandoned.”

Hanratty thinks that The Hilltop is “a great place” to focus development because “there’s really no other place to build major things without tearing stuff down first,” he says. If the affordable housing development does come through, though, “we would want to make sure that the people who have first dibs are the local people. Not that I want to deny anyone, but really [give access] to the people who have been the most oppressed.”

Patterson-Howard, who made history as the first woman elected mayor in the City of Mount Vernon as well as the first Black woman chosen for the office in Westchester County, is no stranger to generating community buy-in. She plans to put these skills to work across the project.

“We’re making sure there’s democracy; that there’s fairness and equity and transparency; that we’re helping develop a resilient community where residents have rights and that there’s ownership,” she says. “We are valuing the democratic processes of debate and protest and ensuring that there’s a community voice in this project. It’s not just about housing — we’re building a neighborhood.”

This article is a part of “Design Leaders,” a series highlighting mayors’ roles in design and the built environment in their cities. Design Leaders is made possible with the support of The Mayors’ Institute on City Design, a National Endowment for the Arts leadership initiative in partnership with the United States Conference of Mayors.