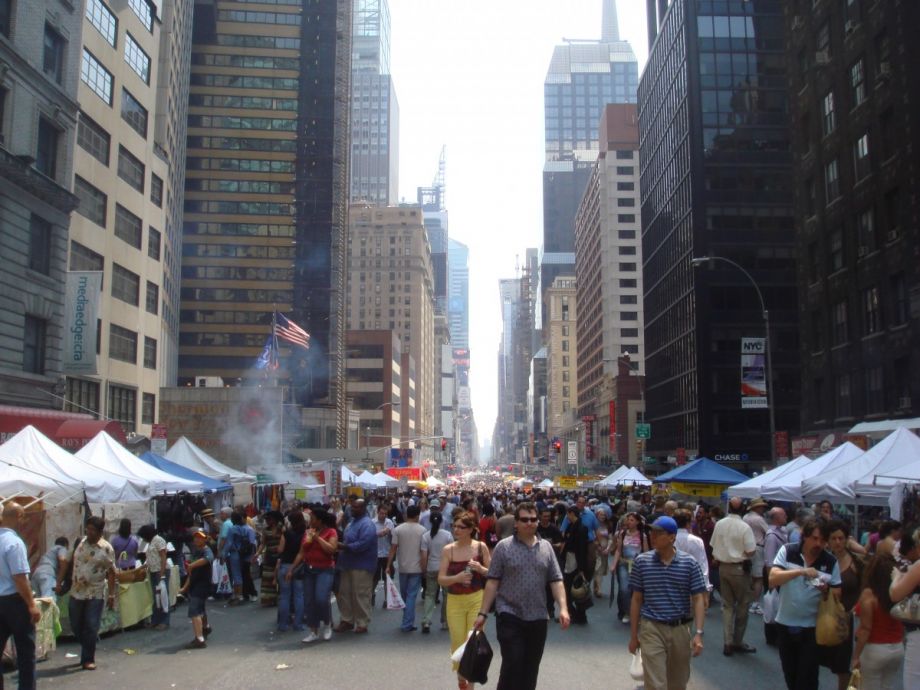 A street fair on 7th Avenue (Photo by Will via Flickr)

As any locals who’ve experienced them will tell you, New York City’s street fairs are broken. With just three production companies running the hundreds of fairs that pop up on city streets annually, and with only 20 vendors holding 46 percent of all food permits distributed by the health department for such events, the fairs have become hopelessly generic. Far from representing the communities that host them, the fairs often feature a monotonous parade of vendors hawking cell-phone cases, costume jewelry and chocolate-dipped fruit kebobs. Now, reports DNAInfo, the company Pop Up New York is seeking to revive the concept, offering neighborhood groups a street fair more tailored to them.

“Street fairs have been synonymous with tube socks, sausages, pashminas for quite some time now,” Evan Berman, Pop Up New York founder and managing director, said. His uncle is president of Clearview Productions, one of the three production companies that runs exactly the kind of “cookie cutter” street fairs residents are over. As DNAInfo reports, the Center for an Urban Future called for rethinking the cities’ street fairs in 2006; two years earlier, radio host Brian Lehrer reflected that the fairs have “come to represent the triumph of commerce over culture, the marginalization of community in the name of community.” He argued that the city and the nonprofits that sponsor street fairs should be able to make more discriminating decisions about what kind of vendors participate, and allow more space for local businesses and young artists. (Only nonprofits can request street closures with permission from their local community board.)

That’s precisely the type of fair Berman wants to deliver. This summer Pop Up New York will partially or completely manage 32 of Clearview’s fairs, wherever nonprofit groups are willing to take a risk with a new concept. Pop Up New York’s fairs offer a tiered pricing scheme that charges local artists and businesses lower fees to encourage participation by people who have never done fairs before. Berman has changed the layout too, spacing out stands to leave room for picnic tables and games.

Some see an “artisanal” bent to the tweak, and along with it, elitism. “We’re very critical of these private companies who are given permission to take over our public spaces, so making [street fairs] more upscale doesn’t change the root cause of the problem here,” said the head of a nonprofit representing vendors who work on city sidewalks. Pop Up New York’s events are concentrated in downtown Manhattan and north Brooklyn; there’s one fair in Forest Hills, Queens. DNAInfo noted that they may not appeal to more diverse communities. “A lot of communities really do like [the traditional fairs],” said Jonathan Bowles, executive director of the Center for an Urban Future.