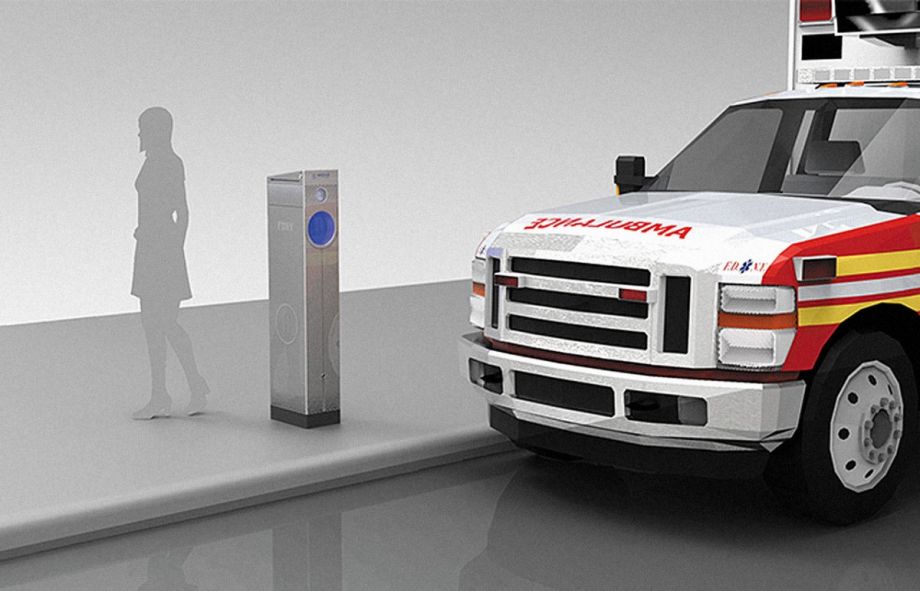 New York City will soon be adding another new piece of street furniture to its sidewalks that aims to cut down on pollution while supporting ambulance drivers, Fast Company reports.

In order to respond quickly to emergency calls, ambulances are positioned all over the city, idling their engines to keep on-board communications and refrigeration systems running. While that allows a quick response time, it also generates noise and air pollution. According to trade publication Fire Apparatus, one ambulance produces an estimated 45 tons of air pollution annually because of idling. Every hour it idles, an ambulance burns 1.5 gallons of fuel, emits 33 pound of carbon dioxide and wears down the engine the equivalent of traveling 35 to 50 miles.

Now the FDNY is installing a street furniture solution designed for energy start-up MOVE Systems by Ignacio Ciocchini, the man behind Bryant Park’s trash cans and NYCDOT’s CityBenches, aimed at keeping response times short while cutting down on the negative effects. Tall, slim pedestals will be installed around the city that allow emergency vehicles to connect to the municipal power grid via a retractable plug. The plug will extend automatically when an ambulance approaches the kiosk, the driver will plug it in, and the ambulance will be able to remain in ready mode without its engine running. If the vehicle needs to respond to an emergency, the driver can leave without unplugging; the plug will automatically retract.

The pedestals share the same stainless steel look as the city’s benches and new WiFi kiosks. Their power doors shine blue when the kiosks are working, and orange if they’re malfunctioning, so drivers know not to plug in. A bright white light on the top helps drivers locate kiosks in poor weather, and a screen on the sidewalk-facing edge allows passerby to see how much air pollution has been avoided because of the technology.

MOVE Systems has a contract to provide 30 pedestals that will be installed in the Bronx, Queens and Brooklyn in 2017. The intent is to eventually spread citywide.

“I’ve been doing street furniture for 18 years, and it’s exciting that technologies are starting to seep into these things and they’re becoming smart, which benefits people in the city,” Ciocchini told Fast Company. “[The pedestals] are part of a solution to having a better city for everyone. There’s really not a single product that can change your quality of life by itself. That’s why a holistic view is important for all street furniture.”