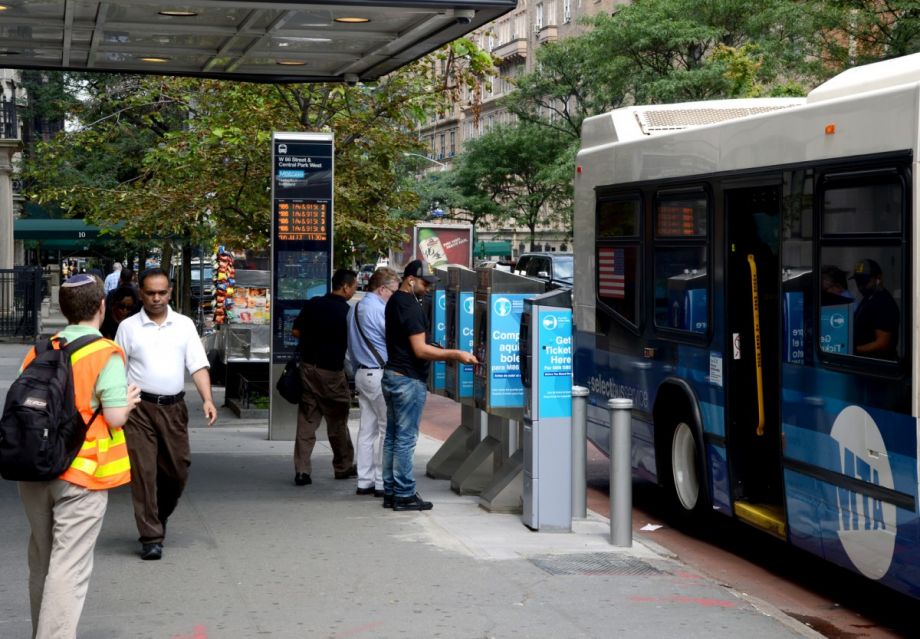 Before mobile phones, it was impossible to know exactly when most things would arrive: your airport pickup, your pizza delivery, your friend who was running late. So in 1996, when New York announced it would put countdown clocks at bus stops, it seemed like glumly scanning the horizon for the next bus would soon become a thing of the past.

Yet two decades later, it’s still rare to stumble upon a New York bus stop with a display telling you how many minutes will pass until the next bus appears. In the city’s most recent participatory budgeting cycle, New Yorkers voiced their displeasure with this, casting 10,986 votes — over 10 percent of all votes cast — to fund countdown clocks for their bus stops.

The votes came from far and wide, from Hell’s Kitchen to Astoria, reflecting broad support for a technology that’s already a fixture of the city’s subway. In a 2016 report, the Riders Alliance, a transit advocacy group, called the subway countdown clocks “an unmitigated MTA success.” That’s not a phrase commonly heard. So why isn’t this useful, popular, psychologically soothing technology more prevalent above ground, in the city’s unpredictable network of surface transit?

In a sense, it is. In February 2011, New York launched MTA Bus Time, a real-time bus tracking service, as a pilot program on Brooklyn’s B63 route. The following year it expanded the service to Staten Island and the Bronx, and by spring 2014, Bus Time was tracking every bus in all five boroughs.

Bus Time allows anyone with a mobile phone to find out when their bus will arrive, either by looking at an interactive map or by texting their location to the MTA, which then sends a response telling them how many stops away the next bus is. When it launched, the head of MTA buses called it “a virtual countdown clock for the bus in your pocket.”

But as it turns out, many straphangers still want a non-virtual option: a brightly lit digital board at the bus stop displaying minutes ticking backward toward zero. There are legitimate reasons for this. For those with an old-school phone, the Bus Time texting function is clunky. Advocates for senior citizens argue that older riders are less likely to use it. And then there’s those New York winters: Who wants to take their hands out of their gloves to open an app? Bus Time is sleek and accurate, but for some it’s a bridge too far.

Hence the 10,986 participatory budget voters clamoring for countdown clocks, which currently exist at only a few heavily trafficked bus stops. There are two main reasons why countdown clocks continue to elude the city’s bus system. One is Bus Time itself, which was intended to make countdown clocks a moot point. The MTA prefers Bus Time to countdown clocks because it’s “less costly to install and maintain,” a spokesman told the New York Daily News in 2012. The paper cited a 2005 study that estimated putting a countdown clock at every bus stop in the city would cost $100 million; Bus Time cost a fraction of that.

The second reason is the troubled history of countdown clocks in New York, which for two decades have been the victim of a series of gone-nowhere initiatives. In 1996, the MTA’s transit division contracted with Orbital Sciences Corp. to design and implement a bus tracking system. Four years later, the plan was abandoned. The satellite tracking signals were no match for Manhattan’s concrete canyons. “It’s not just the urban canyons, but the schedules, the tight schedules, the headways, the traffic,” one of the project managers told NY1. “The operating environment I think is the most challenging of any city’s.”

A decade later, in 2005, Siemens was awarded the contract for a $13 million pilot program to put countdown clocks on six bus routes. This initiative, too, was scrapped. In 2007, yet another system was installed on Manhattan’s 1st and 2nd avenues, but technical malfunctions darkened the clocks four months later. Then, in 2010, a Long Island company strung countdown clocks along 34th Street, the busy crosstown thoroughfare that pioneered some of the city’s first dedicated bus lanes. It was the same firm that designed the Chicago Transit Authority’s bus tracking program, which remains in use to this day, and optimism for the project ran high. The New York Times heralded the clocks as the “Miracle on 34th Street,” but two years later, just like the others, they were dismantled. The MTA explained that “the conclusion of the pilot led us in another direction.”

Today, countdown clocks for buses are back on the agenda. Early last year, Mayor Bill de Blasio announced the installation of new clocks at some 350 bus stops. It’s part of a package of upgrades intended to staunch the bus system’s slipping ridership numbers, including using traffic signal technology to speed up New York’s buses, which are among the slowest in the U.S.

Transit authorities quantify this penalty and take it into account when planning their systems. In New York, the MTA believes that the waiting penalty is 1.75 minutes. In other words, a minute of waiting feels like one minute and 45 seconds of riding, which is why a would-be bus rider might easily give up on waiting for the bus and hail a cab instead.

This is how countdown clocks can potentially elevate ridership. “I believe countdown clocks reduce the waiting penalty,” writes Levy on his blog, Pedestrian Observations. Interestingly, Boston’s transit authority, the MBTA, thinks the ratio is higher — it says one minute of waiting feels like a full 2.25 minutes of riding. This could be because Boston’s transit system is simpler than New York’s, which makes Bostonians less accustomed to transferring. Or perhaps the MBTA thinks Bostonians are simply less patient than New Yorkers.

Either way, if the waiting penalty theory holds, it means countdown clocks have a utility that goes beyond simply calming nerves. Should New York successfully roll them out, they might actually put more passengers on the bus.