How 1 Million Trees Can Change a City – Next City

How 1 Million Trees Can Change a City 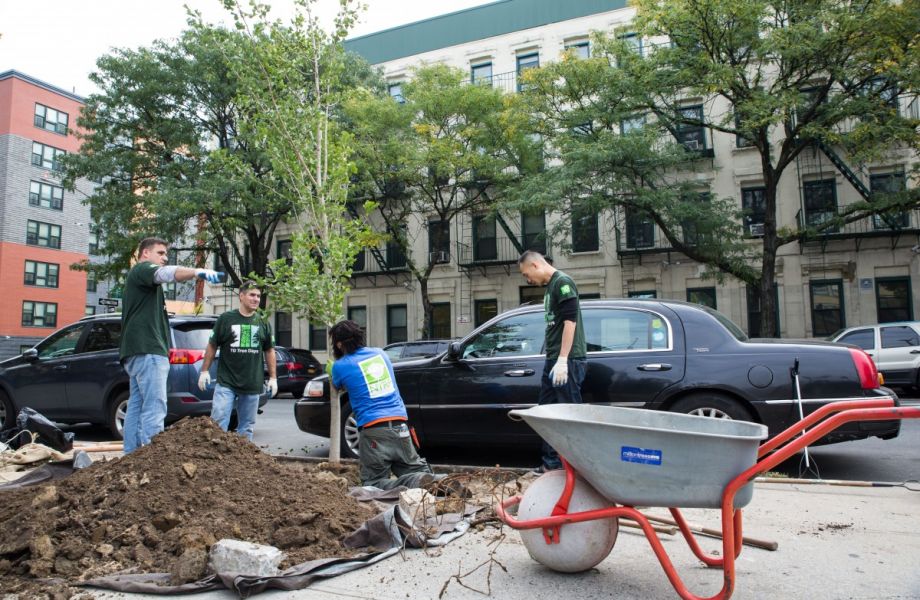 A year after I moved away from Brooklyn, my former roommate sent a picture of our changing neighborhood. Not of the swank coffee shop that replaced the corner bodega, nor any of the dark bars creeping into Bushwick. Mallika sent a picture of a spindly young elm: a street tree the city had just planted at the base of our stoop. She was thrilled.

The little elm was just one in a row of saplings stretching down the block, and the block just one of thousands in the city to receive new street trees in the last eight years through MillionTreesNYC.

A collaboration between New York City’s parks department and conservation nonprofit New York Restoration Project (NYRP), the initiative just succeeded in planting 1 million new trees in the city this decade. The final tree was planted last month, two years ahead of schedule. While cities like Los Angeles, Boston and Denver have all set the same goal, New York is the first to meet it.

Beyond 220,000 new street trees, MillionTreesNYC planted in parks, on public and private property, and in all five boroughs, increasing the city’s urban canopy by 20 percent.

While the city planted 70 percent of the trees in parks and on streets, NYRP was tasked with getting the remainder into public and private spaces, including hospitals, libraries, churches, public housing developments and private yards.

“The urban forest isn’t just on parkland. It’s actually the totality of trees that run through the streets of the city, through housing developments, cemeteries, schoolyards, wherever,” says Deborah Marton, executive director of NYRP.

The initiative began as part of PlaNYC, former mayor Michael Bloomberg’s call for all city agencies to sustainably prepare for 1 million new residents by 2030.

“As we’re increasing the impact on New York City, through development and accommodating more people, we need to be able to compensate for that with additional natural resources and the benefits they provide,” says Jennifer Greenfeld, NYC Park’s acting chief of forestry, horticulture and natural resources.

The benefits of trees are manifold: They sequester carbon, filter air pollution and are rooted in soil that reduces stormwater runoff. But historically, not all neighborhoods have been equally forested.

Before launching the million trees initiative, the NYC parks department had already identified neighborhoods with the greatest lack of and most need for trees by overlaying urban canopy maps with community health survey maps. Unemployment, low incomes, the rate of hospitalization for asthma for children for 14 or under — all correlated with the absence of trees.

From this data the agency designated six “Trees for Public Health” neighborhoods to receive canopy management plans and targeted planting: Hunts Point and Morrisania in the Bronx, East New York in Brooklyn, East Harlem in Manhattan, Stapleton in Staten Island and The Rockaways in Queens.

These neighborhoods not only received trees in public areas, but Marton says NYRP also focused its community-based efforts on them. Twenty-six percent of the city is private, residential property. NYRP sought to increase foliage on that land too, by giving away trees to individuals and organizations.

“The fact is, when you plant a tree yourself, you’re much more likely to take care of it,” says Marton. In addition to trees, NYRP provided tree care education through printed materials, workshops and mini grants for community groups.

Marton says, “Beyond two years, trees can more or less take care of themselves, but they need those two years of extra care. What we learned at NYRP as an institution is that some communities are able to give trees those two years, but not all of them.”

In neighborhoods that struggle with tree tending, NYRP has sometimes brought in outside groups for stewardship. For a new planting of 1,200 trees in the South Bronx, NYRP has funded two years of maintenance through the Center for Employment Opportunities, a post-incarceration job-training program.

Half of the remaining million trees were planted in NYC’s urban forests. Of the 10,000 acres of natural areas in the parks department’s jurisdiction, 7,000 are forest. Greenfeld says these areas had been long neglected, victim to arson and dumping. With the help of thousands of volunteers, MillionTreesNYC was able to plant 20,000 saplings a season in forests, restoring 700 acres citywide.

With the million trees planted and two and a half years of remaining funding, NYRP and NYC Parks are continuing to plant and focus on stewarding trees into the future. Million tree planting initiatives have been criticized for not being able to maintain the trees into maturity, when they provide the greatest benefits.

The next step is an updated census of all street trees; the last was taken in 2006.

“We learned it was a stumbling block for communities to adopt and track their trees because we didn’t have an accurate map,” says Greenfeld. “The result of this street tree census is going to be a highly accurate map where we will create a portal, a public-facing map where stewards can interact with their trees and record the work they’re doing.”

Anyone can adopt a tree to care for through the MillionTreesNYC website, and attend workshops to learn more about stewardship. Thanks to additional funding for tree maintenance in the city budget since 2013, claims against the city for tree-related injuries and damages are at historic lows.

“Too often we don’t think about trees as infrastructure and consequently they don’t get managed over time as infrastructure, and they really provide their greatest benefits when they mature,” says Marton.