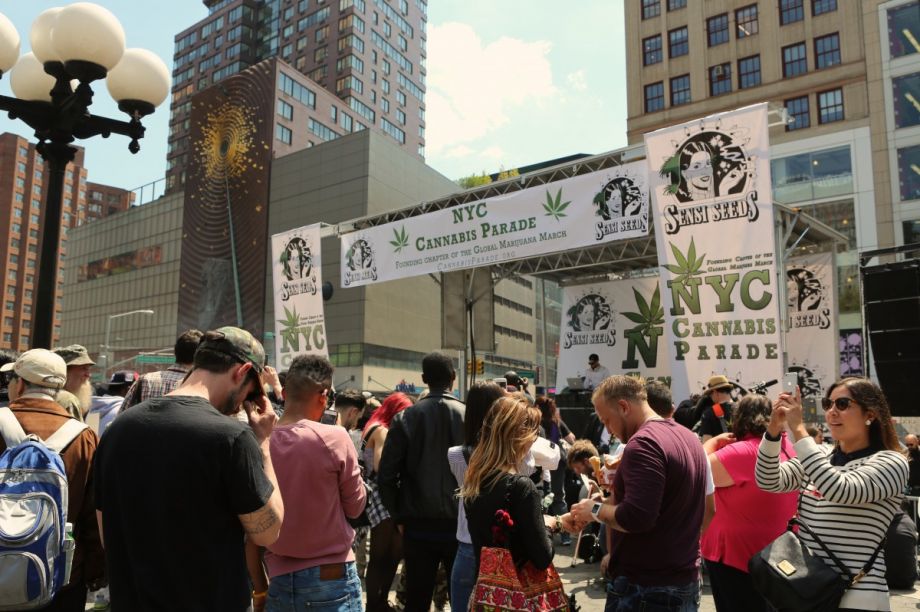 In a victory for proponents of marijuana law reform in New York City, like these marchers at the 2015 Cannabis Parade in Union Square, the mayor has set the wheels in motion for the “inevitable” legalization of pot. (Credit: Beverly Yuen Thompson/Flickr)

The mayor has not exactly done an about-face on pot — he still personally opposes making recreational marijuana legal — but believes that legalization is inevitable and “it is critical our city plans for the public safety, health and financial consequences involved.”

The move comes on the heels of a New York Times investigation that found that black and Hispanic people are arrested on marijuana charges in New York at much higher rates than white people, even though marijuana use is fairly consistent across races.

After the investigation’s results were published, Police Commissioner James O’Neill said he would convene a 30-day working group to review the NYPD’s marijuana policies. The Manhattan district attorney, Cy Vance, said his office will no longer file charges against defendants in marijuana possession and use cases, Mother Jones reported. (Brooklyn may follow suit.)

And on Monday, the mayor’s office said he is putting together a task force “to lay the groundwork for full legalization,” the Daily News reported, “figuring out issues like how cops will deal with public smokers, what kind of zoning will be needed for pot dispensaries, and what types of public health campaigns the city should run about marijuana.”

It’s an abrupt shift from the mayor’s public stance in January, when De Blasio pointed to the city’s 17,500 annual marijuana arrests as “a normal level in the sense of what we were trying to achieve.” Still, as far back as 2014 he was directing police to stop arresting people for marijuana possession and instead issue summonses. Today’s announcement extends the summons policy to smoking in public.

The NYPD blamed the higher arrests in majority-black neighborhoods on an uptick in resident complaints about marijuana. A subsequent analysis by the Times found that that explanation didn’t hold up. In the 85-percent-black Canarsie precinct in Brooklyn, for example, officers arrested people for marijuana use at a rate four times higher than in the precinct that includes Greenpoint, which is 4 percent black, despite the same rate of 311 and 911 complaints about marijuana in those precincts. (In other predominantly black neighborhoods, calls to 311 and 911 are more common, the Times added; criminal justice reform advocates said it’s not because more people are smoking marijuana in these neighborhoods, but because people in poorer areas are less likely to have recourse in the form of a responsive landlord or building super.)

The disparity in arrest rates appears to have more to do with police strategy than resident complaints, according to the Times analysis. Neighborhoods made up mostly of people of color are often already overpoliced compared with white neighborhoods. “More cops in neighborhoods means they’re more likely to encounter somebody smoking,” Jeffrey Fagan, a Columbia Law School professor who advised The Times on its marijuana-arrest analysis, told the Times.

Police officers who see someone smoking marijuana are legally allowed to search that person and check for open warrants, the Times added. Some lawyers say that these searches and warrant checks are the real factor driving enforcement disparities.