NYC Looks Beyond the Classroom to Improve School Performance – Next City

NYC Looks Beyond the Classroom to Improve School Performance 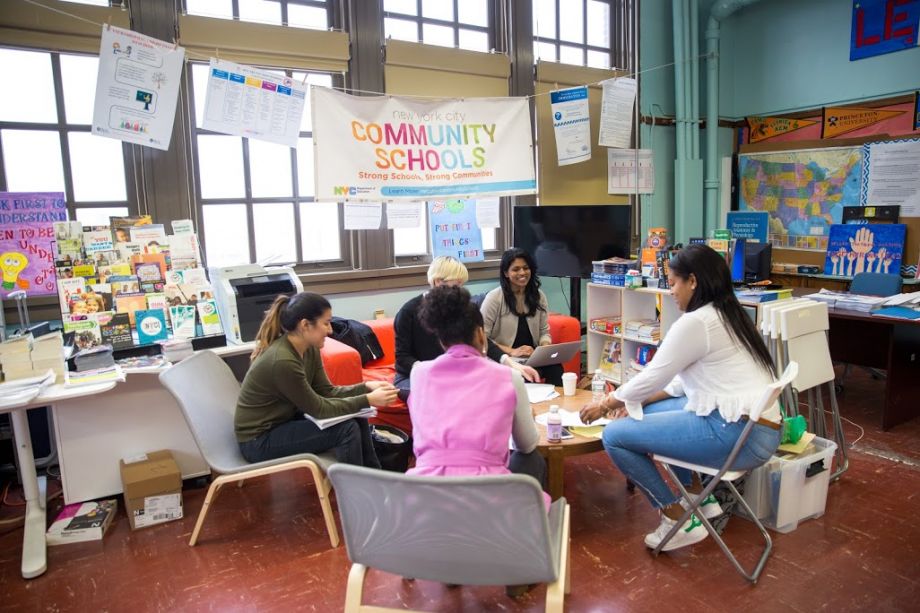 At the Academy of Environmental Leadership, in the Bushwick section of Brooklyn, 100 percent of the high school’s 300 or so students live below the poverty line, and 97 percent are students of color. It was at schools like this where, in 2017, the NYC Department of Education began exploring the question, “What if, alongside after-school programs, tutoring and vision clinics, schools could improve student outcomes by offering public benefits enrollment on site?”

Enrolling in public benefits might seem an obvious choice, yet in the day-to-day grind of life at the lower end of the economic spectrum, it can get lost in the shuffle of working multiple part-time jobs or having to move multiple times a year, sometimes into and out of homeless shelters. Many struggling families end up slipping through the cracks, missing out on benefits for which they are eligible — benefits that might help mitigate some of that turmoil. Academic performance suffers as a result.

“We have very consistent issues addressing hunger, homelessness, lack of access to health care, and need for immigration support and workforce development assistance,” explains Michael Hickey, director of strategy and partnerships at the NYC Department of Education’s Community Schools Initative.

The Academy of Environmental Leadership was one of five NYC public schools where the Community Schools Initiative last year piloted a public benefits enrollment program aimed to facilitate low-income students’ access to stable housing as well as to food, health care, and other essential services. Later this year, the city is rolling out that program to a wider set of schools, with the goal of eventually scaling it up to all schools under the Community Schools Initiative’s umbrella, if not beyond.

The Community Schools Initiative began back in 2014, intending to address the notable inequality between advantaged and disadvantaged students in NYC public schools. Targeting schools in neighborhoods with high poverty rates as well as schools with low rates of academic achievement, the initiative pairs each school with a nearby community-based organization that connects families with affordable housing, after-school support, healthcare, workforce development and other services. There are currently 227 schools around the city that are part of the Community Schools Initiative.

To design and scale up a new public benefits enrollment pilot program that would complement its existing model, the Community Schools Initiative brought in Public Policy Lab, a nonprofit that advances and practices public service design, applying the tools and methods of designers to solve pressing public policy challenges.

The five schools in the public benefits enrollment pilot had especially high populations of students who live in temporary housing, notes Chelsea Mauldin, executive director of the Public Policy Lab.

“The end hypothesis [of the pilot],” Mauldin says, “is that increasing families’ household incomes creates a better home environment for students, which allows them to show up to school more frequently and more ready to learn.”

The NYC Department of Education has recently been called out for an inadequate response to absenteeism among students. In an audit report released this March by NYC Comptroller Scott Stringer, city auditors found evidence that schools reached out to missing youths and their families on the first day of their absences in only eight percent of a sample population.

A big disconnect is that school administrators often don’t know what benefits might be out there — or even if they do, they don’t notify families in need about them.

To remedy the issue, the benefits enrollment pilot is training school staff to better identify students and families in need, while also placing local case workers who can assist these households in applying for benefits onsite at schools. The intervention tactics, implemented over a three-week period in the spring of 2017 as the first phase of the pilot program, generated a 17 percent referral rate among 90 eligible, non-enrolled households across three of the five participating schools. “What we found was, lots of parents responded,” said Mauldin.

While the remaining 83 percent of families did not complete a pre-screening process in order to be matched with a local case worker, “the results were strong enough that, if we really drill down on the strategies that seemed to be most effective, and give it a little bit more time,” says Hickey, “we can continue to build fast, [cost-effective], and [decentralized] solutions.”

The Community Schools Initiative’s goal is to eventually implement a customized version of the public benefits enrollment program in all its community schools. It is important that the services are individually tailored to each school, says Hickey, since “each community school will have a different constellation of people with different skills and relationships with local providers.”

The overall Community Schools Initiative is already showing some promise addressing chronic absenteeism, which the NYC Department of Education defines as missing more than 10 percent of school days in a given academic year. In the 2013-14 school year, students across 110 schools in the initiative were chronically absent from school approximately 47 percent of the time, according to the NYC Community Schools Initiative — a problem that he attributes to the students’ lack of adequate sustenance, housing, and other basic needs. Other potential causes are deficiencies in schools’ monitoring of attendance of chronically absent homeless students, as revealed the Comptroller’s audit report. Within the same 110 schools from 2013-2014 data, chronic absenteeism declined by 9.5 percent in the 2016-17 school year, according to the NYC Community Schools Initiative.

In the second phase of the public benefits enrollment program, which will be carried out in the 2018-19 academic year, school attendance staff will be trained to inform families of chronically absent students about public benefits for which they may be eligible.

“One of the hopes would be that getting people access to benefits programs they’re eligible for, but are not currently using, would support them in their goal of having a secure place to live,” said Mauldin. It’s believed that stable housing can, in turn, lead to better school attendance — which supports the Community Schools Initiative’s holistic approach of addressing students’ needs both inside and outside the classroom.

“You can’t expect a child who is hungry, who has vision impairment, or who doesn’t feel safe, to succeed in school,” says Chris Caruso, executive director of the NYC Community Schools Initiative. “In order for a kid to succeed, you need to address the needs of the whole child.”