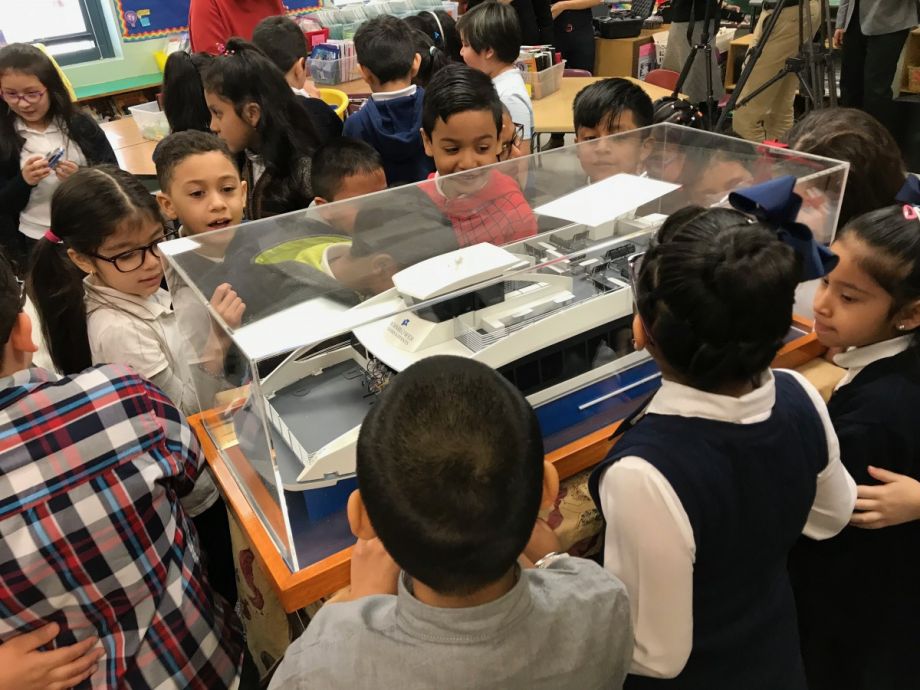 With as many as 800 languages spoken on its streets and in its homes and businesses, the NYC Borough of Queens is known as the language capital of the country, or perhaps even the world. The Jackson Heights section of Queens, with main drags like Roosevelt Avenue seeming like a different country on every block, might be the language capital of Queens. In this neighborhood, at a time when immigration enforcement agents are tearing parents away from children right in front of them, a classroom of predominantly Latino and Latina second graders got to put their stamp on the city they call home.

NYC Deputy Mayor Alicia Glen and local Councilmember Daniel Dromm stopped by P.S. 148Q on Thursday morning to inform the second graders that the name they had crafted together would be given to one of the city’s growing fleet of ferries, and to invite them for a ride on that ferry — once it gets a little warmer.

There was Eddy Guaman Martinez, who had picked up a book about trains in the library and read about the Mallard, which in 1938 set the land speed record for steam-powered locomotives at 126 mph, he proudly explains. Meanwhile, Maria Orea Padilla thought the name “Spring” was beautiful, and maybe a little inspirational. Her classmates agreed. The name they ultimately voted as a classroom of 27 students to submit for consideration: “Spring Mallard.”

It was all part of the second annual contest to name the ferries, run by the NYC Economic Development Corporation, the city’s quasi-public economic development authority. The authority runs the NYC Ferry system, which was revamped a year ago and is in the middle of expanding to serve more neighborhoods. Last year, 13 classrooms from around the city had their names chosen for a new set of ferries.

This year, 23 classrooms submitted names for consideration, and 10 were chosen. The other winning names this year, from classrooms all over the city, include: Seas the Day, Unity, Golden Narrows, The Ocean Queen Rockstar, Rainbow Cruise, Starlight, The Jewel of the Harbor, The Atlantic Compass and Traversity.

At least eight languages are spoken by students at P.S. 148Q, which is predominantly Hispanic. “It’s a true melting pot,” says Principal Yolanda Harvey, who estimates that families with children at the school hail from around 30 countries of origin.

In the NYC Ferry’s inaugural year, the system served nearly 3 million riders across four routes currently in operation. The ridership exceeded the projections by 34 percent. In response to the high demand, the NYC Ferry program announced they will be introducing six higher-capacity boats, outfitted with larger engines and designed to hold up to 349 passengers per vessel.

The Spring Mallard will be operating on one of the new routes soon to be in operation, starting in The Bronx and making stops in Queens and midtown Manhattan along the way to the NYC’s main hub at Wall Street.

The route isn’t quite convenient to Jackson Heights, but Guaman Martinez says he plans to take a ride once in a while.