Prepping for the Next Superstorm, NYC Tries to Fill in FEMA’s Blanks – Next City

Prepping for the Next Superstorm, NYC Tries to Fill in FEMA’s Blanks 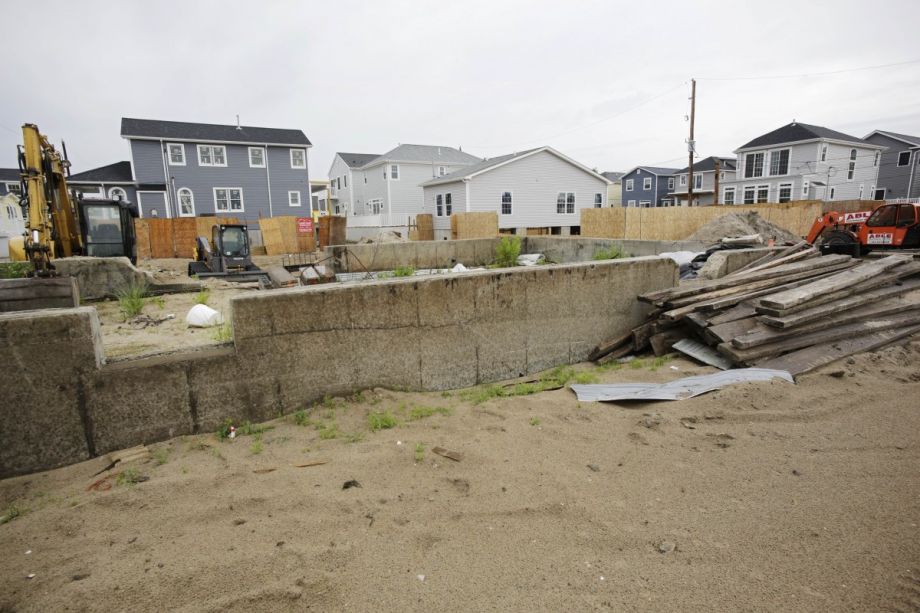 New homes in the oceanfront community of Breezy Point in Queens are evidence of post-Sandy rebuild. (AP Photo/Mark Lennihan)

In the two years since Superstorm Sandy sent seawater surging through the low-lying streets of New York, there’s been a lot of focus on what government can do to protect the people who live and own property on those streets. Should we build seawalls? Oyster beds? Wetlands? Beach dunes? Should we encourage people to clear out of certain waterfront neighborhoods?

All of those things might prove to be pieces of the solution. All of them, however, will take time. And we don’t know when the next storm is going to arrive.

That means that many property owners in the city need to make their own choices about how to face the future. They can leave the neighborhoods along the city’s 520 miles of shoreline, if they can find someone who will buy them out (the state is helping with that in some of the most threatened areas). They can hope and pray that the floodwaters don’t come back anytime soon. Or they can prepare for the next deluge by making flood-specific improvements to their properties.

The city’s planning department wants to make that last choice easier. Last week, they released an analysis of options titled “Retrofitting Buildings for Flood Risk,” which aims to “help residents understand their options” in the complicated regulatory landscape that has emerged in Sandy’s wake. The report directly addresses the new standards and flood maps set out by the Federal Emergency Management Agency (FEMA) and the National Flood Insurance Program (NFIP), which affect 71,500 buildings, 532 million square feet of interior space, and 400,000 residents in the city’s 1 percent annual chance floodplain (also known as the “hundred-year floodplain”). Those new federal flood maps, which have increased the number of affected structures by 101 percent over the last set of maps, will likely go into effect in 2016. They will have serious cost implications for affected property. 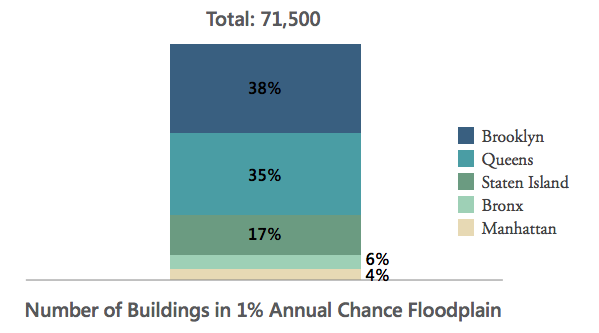 “Higher flood insurance rates are posing challenges in our coastal communities. Homeowners and design professionals need guidance to navigate this new reality,” Daniel Zarrilli, director of the Mayor’s Office of Recovery and Resiliency, said in a statement. “This document provides exactly the type of practical information that is needed to comply with new codes, reduce flood risk and avoid punishing insurance rate hikes, in support of the City’s comprehensive climate resiliency plan.”

The report walks property owners through the entire retrofit process: assessing flood risk; reviewing codes and regulations; coming up with a flood-mitigation strategy; and identifying short-term adaptation strategies. It then outlines case studies for the varied types of building stock found at the watery edges of New York, from bungalows to mid-rise apartment buildings.

“Retrofitting Buildings for Flood Risk” presents resilience options for every type of housing stock in the city, including bungalows and attached (above).

That varied building stock presents a special challenge, according to the report’s authors, because current federal standards don’t address all the different types of construction found in the New York floodplain. The report specifically calls for further FEMA research into retrofitting strategies that are adaptable to the dense older construction found in many New York neighborhoods — places where moving crucial building systems to the roof, for instance, or raising entire structures, may not be possible. It also calls for reform to FEMA and NFIP standards, “to develop cost-effective alternative methods of mitigation to reduce flood risk to residential buildings that cannot be elevated due to their structural characteristics.”

While the report is tailored to the specific challenges of New York, its authors also are well aware that many other cities up and down the nation’s coasts are facing the same rising sea levels and more frequent severe climate events. And like New Yorkers, they are unlikely to be walking away from all their coastal neighborhoods.

“Waterfront communities are an intrinsic part of New York City,” said Carl Weisbrod, director of New York’s department of city planning, in a statement. “’Retrofitting Buildings for Flood Risk’ is an invaluable tool for New Yorkers to make improvements to protect their homes. It offers strategies that collectively provide for a more resilient character and future for our waterfront neighborhoods. We hope that this study can be used as a resource not only in New York, but in other coastal cities with similarly diverse building types.”