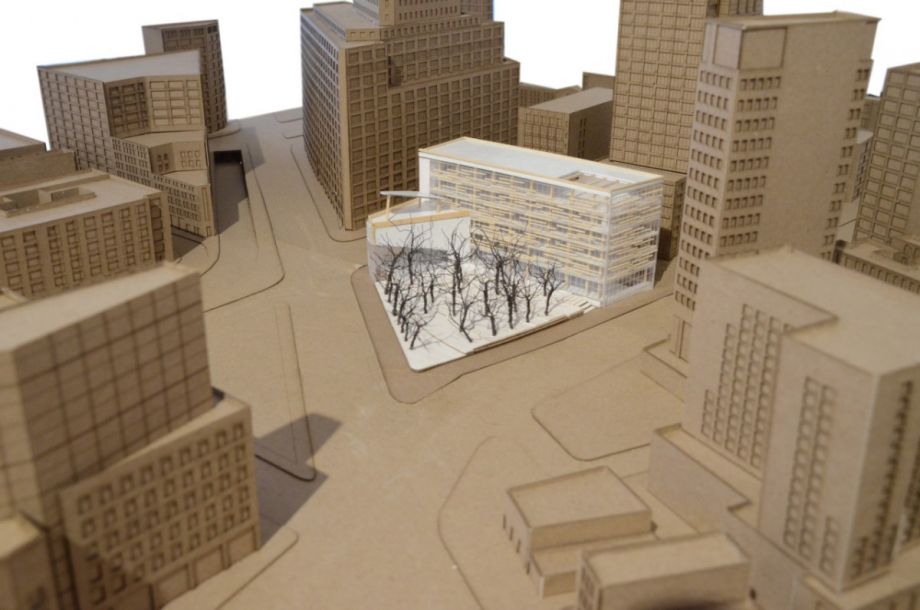 Picture a science museum. Do you see taxidermy dioramas and dinosaur skeletons amid dim lighting? Or a family-friendly center, with gaggles of children and messy, interactive exhibits? Now picture a museum about climate change. What does that look like? If Miranda Massie has her way, we’ll know by 2020.

Massie is the founder of the Climate Museum Launch Project, and she wants to build the world’s biggest, most ambitious climate museum in Manhattan or Brooklyn — with doors opening by the end of this decade. Massie conceived the project after Hurricane Sandy, an event that opened many New Yorkers’ eyes to a watery future. But Massie, a former public interest lawyer, says the museum won’t just be about grim predictions; it will serve as a forum to educate the public about the problem and inspire them with potential solutions.

“There’s research currently that shows the more people learn about climate change, the more they tend to emotionally shut down and disengage,” Massie told the New York Times. “Not everybody, just most people. Because it’s distressing, and it’s very clear that just changing the light bulbs in our own home doesn’t matter. So you have to make it clear that you’re part of a broader set of efforts and those broader efforts can succeed.”

The Climate Museum exists in concept only right now, but the idea has fans. Last week, the New York State Board of Regents granted the museum a five-year provisional charter. The next step is funding — an ambitious plan to attract one million visitors per year will require a space roughly 120,000 square feet and hundreds of millions of dollars — followed by selecting a site and designing a building.

Design poses a unique challenge. The exterior of grand museums often hint at the collections encased inside. Frank Lloyd Wright’s Guggenheim in New York is a piece of contemporary art itself. There’s talk of luring a “starchitect” or holding a design competition, but a museum focused on the environment — and hence on humanity’s detrimental impact upon it — has to practice what it preaches.

“The building itself has to be part of the conversation,” says Anne Tate, a professor of architecture at RISD (who is also married to Massie’s cousin). Tate assigned one of her studio classes to design the climate museum as a semester-long project. The student’s designs varied widely, but they intuitively agreed on one aspect: “[The museum’s] not a shell into which you put the information,” says Tate. “Partly because of the nature of the problem.”

Tate’s students designed museum buildings that were themselves solutions: Think the museum as infrastructure. For the purposes of the assignment, Tate and her co-professor, landscape architect Nadine Gerdts, assigned a vacant plot of land in Lower Manhattan that was once a marsh and is now highly susceptible to flooding. (An actual site has not been selected yet.)

One student proposed to build a cavernous stormwater catchment system beneath the building. Another proposed a smaller footprint and returned the rest of the site to wetlands. Many of the designs include solar panels, some incorporated urban farms, and all were sensitive to energy loads and orientation.

Siwei Shen’s design placed a high school on the site that shared facilities with the museum. Many of the students incorporated other uses too: labs for environmental research, a farmers’ market, even housing.

The students fundamentally questioned dubbing the project a “museum.”

“The concept of a museum is a little old and stuffy,” says Tate. “Everyone was like, no, this is more about being engaged. They thought of the museum as a part of the city, not just an interior collection.”

Massie has said she wants the museum to be a hub for activism and involvement. Following the lead of Hong Kong’s Jockey Club Museum of Climate Change — the only climate change museum in the world currently — visitors may be asked to make pledges about reducing their environmental impact, or be invited to volunteer their time to environmental causes.

She has also said that exhibitions will likely be temporary, not permanent, to reflect ever-evolving scientific discovery. While she and her board work to secure funding and a permanent location, they may open an interim museum in an existing building. Massie attended two early reviews of the RISD students’ work and a final presentation — and may have walked away with some added inspiration to see the project realized. “I think they just blew her mind,” says Tate.