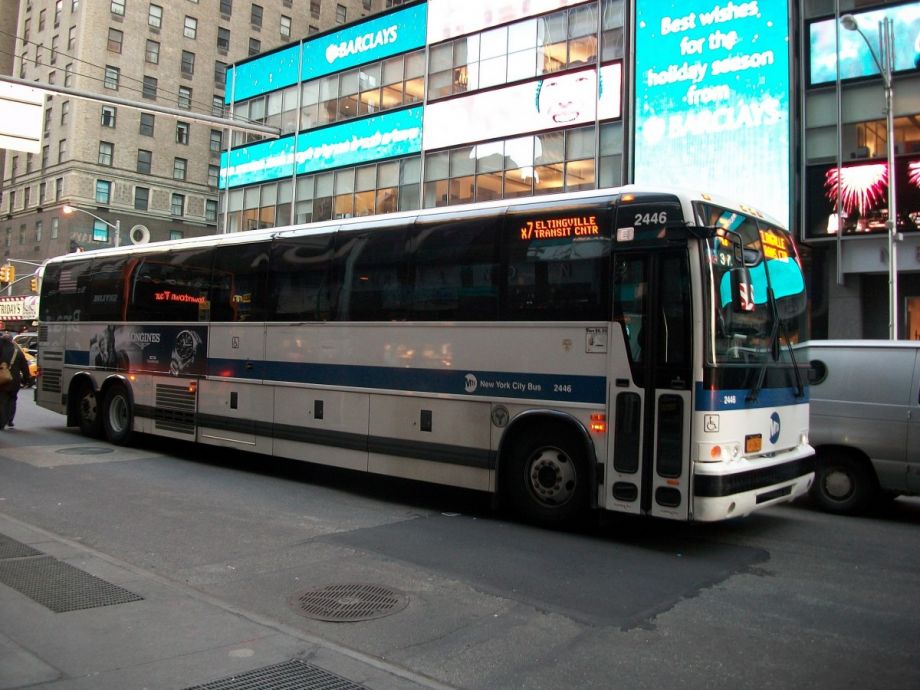 New York City may consistently rank among the top cities for commuting without a car, but even as the population, job opportunities and subway ridership have increased over the past decade, bus ridership has declined. Between 2002 and 2015, it’s dropped 16 percent. That’s in part because buses tend to be both unreliable and slow, a situation that leaves many older New Yorkers and residents of low-income neighborhoods — who ride the bus at higher rates — in a lurch. The NYC Bus Turnaround Coalition wants to change that. The group’s new report, “Turnaround: Fixing New York City’s Buses,” lays out concrete improvements, including redesigning routes to be more efficient, streamlining the boarding process and adopting better tools to keep buses on schedule.

“Buses are the unsung heroes of our transit system, reaching into every part of the city to guarantee that New Yorkers can live in affordable neighborhoods and still have access to jobs and education,” said John Raskin, executive director of the Riders Alliance, a member of the Turnaround Coalition, which also includes NYPIRG’s Straphangers Campaign, TransitCenter and the Tri-State Transportation Campaign. “But buses are suffering: They’re slower than ever, notoriously unreliable and increasingly unpopular. New Yorkers are voting with their MetroCards to abandon the bus, and we need to provide service good enough to convince them to come back.”

The coalition’s report draws on lessons learned in other cities that have improved failing bus systems. Houston and Seoul saw ridership increasing after revising bus routes to be more efficient and responsive to resident needs. The report recommends NYC do the same, eliminating unnecessary turns and deviations, and spacing out the distance between stops. It also recommends breaking up long routes, which tend to be less reliable than short ones.

On crowded routes, the report suggests the city build on the success of the NYC’s own Select Bus Service (SBS) bus rapid transit system by expanding the number of express routes. Even as route times have increased and bus ridership has declined elsewhere in the system, travel time has decreased between 13 and 23 percent on SBS routes and ridership has increased between 10 and 31 percent. To ensure faster times on all routes, the report advocates for dedicated bus lanes, boarding islands, optimized traffic signals, and queue-jump lanes, which give buses in dedicated lanes a three- or four-second head start at intersections.

Streamlining how people board the bus and pay their fares can also cut down on travel times. The report looks to San Francisco and London as examples of cities that have successfully implemented contactless payment systems and all-door boarding as strategies to cut down on time spent at stops. In San Francisco, the addition of fare card readers at both a front and rear door has sped up boarding at the busiest stops by nearly 40 percent, according to the report.

All of these improvements could contribute to more timely bus arrivals, and the coalition wants to guarantee that timeliness through better dispatch interventions and real-time vehicle-location data. Buses are already equipped with GPS tracking, but the report notes that while it’s standard for dispatchers to stay in constant contact with subway drivers and to modify service in real-time to keep trains running smoothly, the same can’t be said for bus service. Empowering dispatchers to hold a bus at a stop or to skip a stop if another bus is close behind can improve service for riders on the entire line.

Riders need access to that real-time data, too, both at bus stops — “the next bus will arrive in 10 minutes” — and on the bus itself — “the next stop is Union Square.” The report advocates for open data on bus performance, for use by watchdog organizations and app developers, as well as access for the general public. And overall, the report says the bus system must become more intuitive for riders. It suggests developing different types of routes for different purposes: One type of bus might connect far-flung neighborhoods to subway stations; another might serve as local circulators; and another might be designed to go between boroughs. Each route could be branded with colors or use a certain numbering scheme so riders have an immediate grasp of its purpose. “Our current network provides thorough coverage of the city,” reads the report, “but too many routes are intended to serve all types of trips and end up not serving any of them as well as they could.”