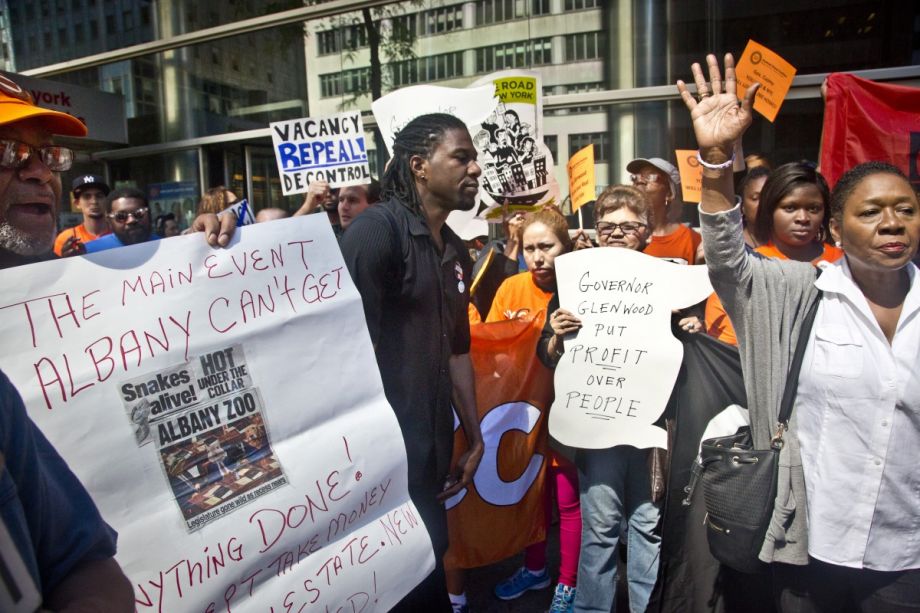 New York City’s hodgepodge of rent regulation has many unintended consequences, but one of the most perverse is tenant harassment. Landlords seeking a windfall by jacking up rents from one tenant to the next may bother their building’s residents day and night with everything from offers of a few thousand dollars to leave, to doing renovations that are loud or left half finished. Although there isn’t authoritative data available, tenant rights advocates say that because the city’s rising market-rate rents have increased the incentive for landlords to get rid of rent-regulated tenants, harassment has spiked in recent years.

“We’re seeing a crisis in terms of harassment, and the increase over the last five or 10 years is just astounding,” says Ellen Davidson, staff attorney at the Legal Aid Society, which often represents indigent tenants.

New York’s local news abounds with stories from the frontlines. According to The Village Voice, longtime residents say that Jared Kushner bullied tenants in the East Village with construction causing caved in ceilings, dusty stairwells and even dangerous gas leaks. Gothamist reported in February on how renters in Brooklyn’s Crown Heights allege they were pushed out by exposed electrical wires and buildings that went without a boiler for months, so that landlords could renovate in anticipation of new higher-paying tenants.

Now, the New York City Council is trying to tackle the problem with a package of bills that would crack down on landlords who make their tenants’ lives miserable. But no policy will permanently fix the problem without addressing the underlying cause: Landlords have a big financial incentive to turn over rent-regulated apartments.

The council bills aim to discourage harassment through deterrence — increasing the likelihood and severity of punishment. One means is leveling the playing field in housing court between landlords and their often economically and socially disadvantaged tenants. A new law, which Mayor Bill de Blasio signed in February, will provide every tenant with a lawyer in housing court. Other recently introduced bills would change definitions of harassment or increase penalties for landlords:

-Council Member Helen K. Rosenthal of Manhattan’s Upper West Side proposed bills to allow housing court to assess additional costs from landlords, such as punitive damages for tenant harassment, and to create an Office of the Tenant Advocate within the Department of Buildings.

-Council Member Mark Levine, whose district stretches from the far Upper West Side through Harlem to lower Washington Heights, wants expand the definition of harassment to encompass persistently contacting a tenant at inappropriate hours.

-Council Member Carlos Menchaca from Sunset Park, Brooklyn, would amend the city’s harassment law to allow a landlord’s conduct to be considered “repeated” conduct even if the previous act was directed toward a different tenant. “Landlords often have pattern of repeat offenses, often in the same buildings,” says Menchaca spokesman David Estrada. “So they have a bag of tricks and each instance was treated separately rather than looking at the context.”

-Speaker Melissa Mark-Viverito from East Harlem and Council Member Ritchie J. Torres wrote bills that would make certain landlord actions, such as tacking non-rent fees onto a bill or physically assaulting a tenant, presumed harassment. (Previously tenants had to vacate the apartment in response or prove in court that the intent of the landlord’s action was to get them out.)

A slew of other bills would take smaller actions such as creating a city government task force to study the construction and renovation practices in occupied buildings, and requiring more public outreach from the city to apprise tenants of their rights.

Council insiders say they expect many of these bills to pass later this summer. However, the city’s powerful real estate lobby is not going down without a fight. The Real Estate Board of New York (REBNY) testified to the council in opposition, complaining that the new definition of harassment would be overly broad in presuming an action constitutes harassment, rather than forcing the tenant to prove it.

“Tenant harassment is wrong and so is denying the basic American principle of ‘innocent until proven guilty,’” a spokesman for REBNY President John Banks emails.

But the political wind, at least within the city itself, is at the tenants’ backs. All of this comes less than a year after de Blasio signed three new laws to crack down on landlords harassing tenants with buyout offers. It’s now illegal to try to buy out a rent-regulated tenant within 180 days of a tenant refusing one, to threaten a tenant, contact tenants at odd hours, or provide false information to a tenant in connection to a buyout offer, or to make a buyout offer without informing tenants of their rights to refuse, stay in the apartment, and consult a lawyer.

But affordable housing advocates and experts say that none of the council’s existing or likely future actions can truly end tenant harassment for good. As long as there is a financial incentive for landlords to push out their rent-regulated tenants, they will find a way to do so.

“The council passes bills to stop one form of harassment and another form or harassment opens up somewhere else,” says Davidson. “For a while there was significant harassment with buyout offers — landlords hiring pretty unscrupulous people to knock on tenants’ doors night and day and follow them to work. Since the [2015] bill was passed, that happens less and now construction harassment is even worse than it has been. We represent tenants where the landlord, to get rid of them, took out the staircase and boiler. The construction abuse that’s been going on in the city is just completely out of control.”

Only the state government has the power to change the underlying dynamic that leads to tenant harassment in the first place. To understand why requires a dive into New York’s rent regulations. Only about 27,000 apartments in the city are rent-controlled, meaning their rents are way below market-rate because they have been continuously occupied since 1971. Far more units, just over 1 million, are rent-stabilized. Their rent goes up every year by a small amount, based largely on inflation, determined by the Rent Guidelines Board. All of these laws typically apply only to buildings with more than six rental units that were built before 1974. Rent-stabilization does not include the vast number of other apartments rented at below-market prices, such as public housing or buildings that accepted rent limits in exchange for tax breaks.

Like many crucial policies in New York City, such as its tax rates, the power to adjust rent regulations lies with the state government in Albany — where the real estate industry is a major player. Through their multiple LLCs, big developers and landlords skirt campaign finance laws and give hundreds of thousands, or even millions of dollars in every election cycle to state legislative candidates, according to a January exposé by The Real Deal and ProPublica.

Over the last few decades, landlords have successfully lobbied for various loopholes to rent-stabilization rules. Among the most significant: a “vacancy bonus” that allows rents to jump up as much as 20 percent between tenants, a “preferential rent” system by which landlords can charge less than allowable rents one year and bump it up dramatically the next so that they can increase turnover and accumulate more vacancy bonuses. Landlords also can raise rents upon renovating an apartment.

The problems of Albany’s making can only be solved by Albany. “Because we work with so many rent-regulated tenants, we see the biggest issue at the state level,” says Katie Goldstein, executive director of Tenants and Neighbors, a New York pro-tenant advocacy organization. Tenants and Neighbors supports bills, which have been introduced in both chambers of the legislature, to eliminate the vacancy bonus and reform preferential rent practices.

“Eliminating the vacancy bonus would mean rents are actually stabilized, as opposed to going up between tenants, and it would dramatically reduce the incentive for harassment,” says Goldstein. But the Republican-controlled State Senate and pro-business governor mean they won’t become law. “Our bills always pass the Assembly but not the Senate, and Gov. [Andrew] Cuomo has not been a friend to us because of his massive support from the real estate industry.”

The real estate industry’s political influence is, like the persistence of tenant harassment, proof that money has a tendency to find a way to get what it wants. So to rent regulation reform, add state campaign finance reform on the list of political challenges that will ultimately be needed to protect New York’s tenants.

Correction: This article has been changed to reflect that rent-controlled apartments do have annual rent increases.