Now in Grand Rapids: Paratransit That’s Ready When You Are – Next City

Now in Grand Rapids: Paratransit That’s Ready When You Are 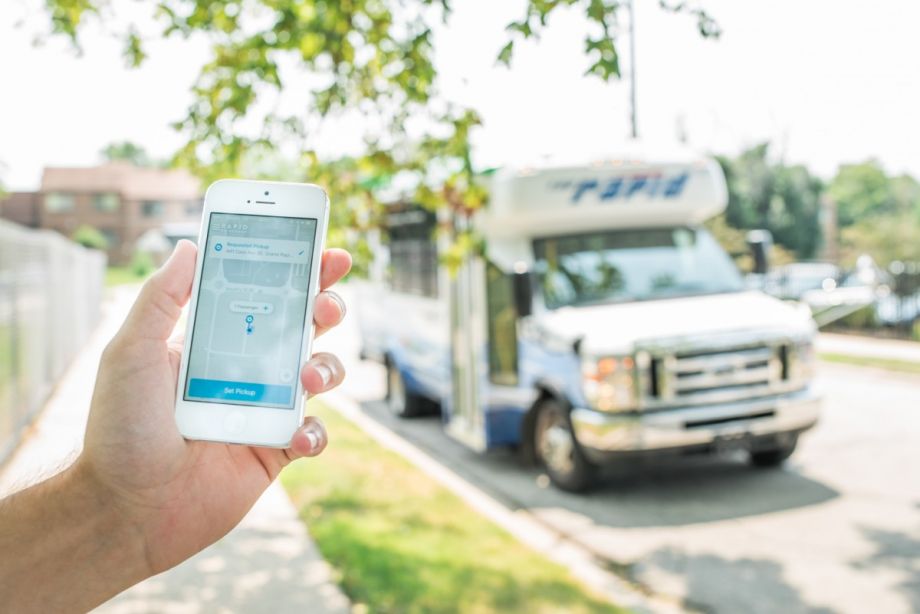 Even though transit agencies have made their bus fleets accessible to riders in wheelchairs as mandated by the Americans with Disabilities Act, paratransit service — direct origin-to-destination transit for disabled riders using passenger vans — remains a key component in providing mobility for those unable to walk.

There’s a catch, though: rides have to be scheduled ahead of time, usually several days in advance. That’s one reason advocates for riders with disabilities continued to push for systemwide accessibility even after paratransit was introduced.

Now, thanks to a public-private partnership, paratransit in Grand Rapids has taken a giant step towards working like regular transit.

The Rapid, the transit agency serving Grand Rapids, Mich., has launched a six-month pilot paratransit program called Rapid On Demand. The service allows paratransit users to summon rideshare vans to take them where they need to go, when they need to go, using a smartphone app.

The on-demand paratransit service is powered by technology developed by Via, a ridesharing company focused on providing “last mile” and other flexible services designed to complement rather than compete with public transportation. Via’s technology identifies riders traveling in the same general direction and matches them with vehicles going that way.

The company already operates on-demand multi-passenger rideshare services in more than 80 cities worldwide. According to a Via news release, this service is the first it has developed to focus exclusively on older and disabled riders, although, as New Starts has previously reported, Via is offering a similar service in Newton, Mass., for seniors.

The pilot project is one of a growing number of on-demand paratransit services being provided by U.S. mass transit agencies. Similar services now operate in Boston, Jacksonville and Kansas City, among others, and New York’s Metropolitan Transportation Authority announced in March that its wildly popular pilot program in which paratransit users can hail rides in taxis using a smartphone app will be expanded and extended through the end of this year.

Metro Report International reports that testing has begun on the catenary-free section of the new CBD and South East Light Rail line in Sydney.

Since July 30, Alstom Citadis X05 trams have been making test runs on the 2-km (1.2-mile) section of the line connecting Town Hall with Circular Quay. Along this segment, the trams are powered by Alstom’s APS power-supply technology, which delivers power via a rail embedded in the ground. The rail is energized only when a train passes over it, making it safe for pedestrians to cross.

The entire line runs for 12 km (7.5 miles) from Circular Quay in central Sydney southeast to Randwick and Kingsford, serving 19 stops along the way. Testing on the first section of the line began last year, and the entire line is slated to begin revenue service by the end of this year. The line is being operated under an A$1.2 billion (US$810 million) public-private partnership agreement by a consortium of which Alstom is a member.

For 118 years, residents of the German city of Wuppertal have gotten around town on a unique monorail whose trains are suspended from rails that run over city streets and the Wupper River. For the last nine months, however, residents and visitors have had to use alternate means of transport after the line was shut down for repairs. Those nine months came to an end Aug. 1 when the Wuppertal City Authority (WSW) announced the resumption of service on the line.

The International Railway Journal story announcing the reopening reports that the WSW shut down the line in November 2018 after power supply rails came loose and broke. The line received a total overhaul during the shutdown, updating it where needed as well.

The line, which is also a tourist attraction, carried 85,000 riders daily prior to the shutdown. During the shutdown, the older railcars working the line were retired, and service is now being provided exclusively by the new fleet of Stadler GTW2014 cars.