How the November 2015 Attacks Changed Paris – Next City

How the November 2015 Attacks Changed Paris 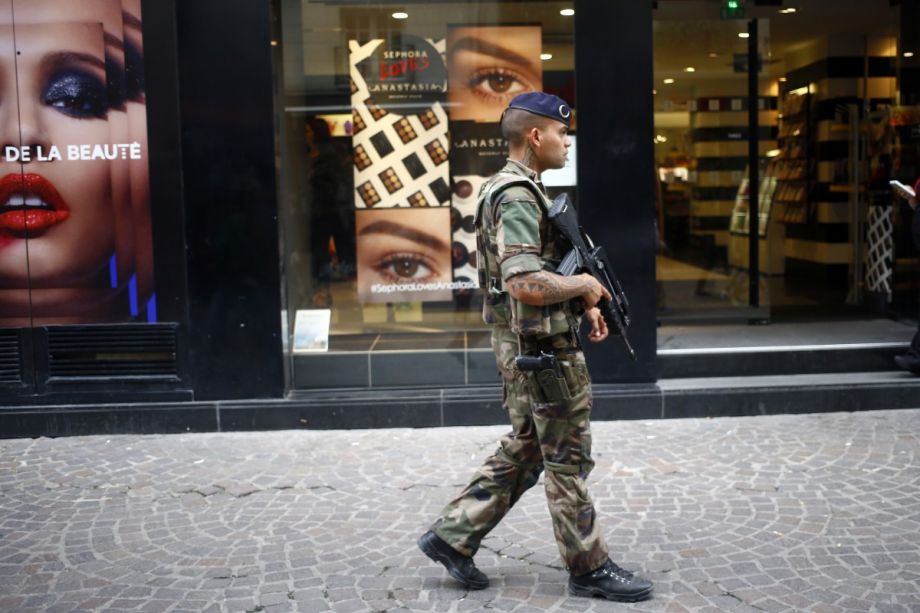 Jonah Goodman moved to Paris recently from Berlin. He grew up in Britain, where he did cadet training in high school, and he was somewhat startled to see soldiers walking down Paris sidewalks staggered in what he recognized as combat formation.

He found it strange in central Paris, “already kind of a fairyland.”

It’s been almost a year since the November 2015 attacks, when terrorists killed and injured hundreds at several events and sites in the city. And you’ll still stumble into the patrols of soldiers — if perhaps slightly fewer than before. They’re not just at the foot of the Eiffel Tower but flanking the entrance of the downtown BHV department store, walking the narrow, old streets of the Marais or the placid 8th Arrondissement.

I moved to Paris from Montreal weeks after the attacks, and I’ve had countless conversations with acquaintances and strangers over the course of the year about their reactions to the soldiers, and the routine bag searches required to enter public spaces. In cold weather, people were asked to unzip and open their coats. A few weeks ago, I found the process for getting into the Olympia concert hall involved a pat-down, two separate bag searches and a wanding.

There is no consensus but people here generally fall into one of two camps on the omnipresent security. Some shrug that it’s an unhappy necessity of the times we live in. Many find the armed presence reassuring. One Parisian told me she was nervous when she was not searched going into the Opera. Others, particularly many ex-pats, say the soldiers in the streets increase their anxiety — creating a war-like atmosphere or risk of accidents with the guns in a crowded subway car; some simply find the soldiers too intrusive a reminder that things are not normal.

For a story earlier this year, I met the rabbi of a small Jewish congregation. Rabbi Tom Cohen, an American, leads one of the few shuls in the city that is not orthodox or conservative and has, consequently, a particularly diverse congregation. For six months after the attacks on the Charlie Hebdo magazine offices and a kosher supermarket, Cohen had soldiers out front 24/7. He told me his congregants’ reaction split roughly along demographic lines.

“This one woman in particular,” Cohen said, “it took her a while to digest and realize that the soldiers were there to protect her and not trying to arrest her, because that was her family’s experience during the war.” American ex-pats appeared particularly unnerved. Sephardic congregants, many of whom would have arrived in mainland France after WWII, seemed least disturbed.

He credited the soldiers’ presence for saving his religious school. Otherwise, he said, most parents would have kept their children home out of fears that more Jewish establishments would be targeted.

Places with similarities to sites of previous attacks often have some of the tightest security — like the Olympia. For several weeks each summer, a roadway on the right bank of the Seine becomes an urban “beach” called Paris-Plages. This year, units of heavily armed police and military in camouflage were ubiquitous there during the busiest times of the week. Security intensified over the season.

After the attacks in July on Nice’s waterfront Promenade des Anglais, police vans appeared at the top of the Seine’s onramps, and armed forces joined the private security guards whose bag checks became much more thorough. Police boats took to the water. The beach has been disassembled but the road has not yet reopened, and is equally busy weekends with walkers, joggers and bikers. The security has been largely discontinued.

Some of the show was for tourists’ benefits. France, the most-visited place in the world, has a lot to lose to perceptions that it has become unsafe. It is understandable that the government would want to establish a visible, reassuring presence.

But a certain pro forma-ness of searches can itself become disconcerting — a metal-detecting wand waved vaguely over a handbag, having your purse searched but not a second laptop or duffle bag.

There are questions about resource allocation. There have been a number of smaller attacks elsewhere in France in 2016. Nice, of course, but also incidents that did not make international headlines. Recently, a trio of women allegedly tied to ISIS left a car with a trunk full of gas canisters across from Notre Dame cathedral. The attack appears to have failed because the car failed to ignite. It sat for hours — in a no-parking zone with flashers on and license plates removed — before police responded to calls. Many people noted that, during the day at least, the location is one of the most visibly patrolled in the city.

The “security theater” concept is attributed to American computer security specialist, Bruce Schneier, and is the idea that many measures are more spectacle than meaningful. “You can’t possibly defend against all plots,” he told Billboard a year ago. “It’s trying to guess the plot correctly, and you can’t guess the plot correctly.”

Experts will argue that the cumulative effects of multiplying security measures may reduce cumulative risk, or prove dissuasive. Some Parisians appreciate knowing at least the space they’re entering has a level of protection. But there is a sense of the impossibility of protecting an entire metropolis against terrorists who target everyday destinations.

There is also the fact that the costs are spread unequally — that a young man of African descent is likely to get more heavily scrutinized. Less visible to much of the public, the legal requirements for searches were formally lowered after the attacks. A wave of searches of Muslim homes and businesses took place, largely over by the spring.

As the months have gone on, an open and increasingly nagging question is how long this all may last and where it could spread. In France, people ask if their reality could come to resemble Israel. Over the summer, particularly after the deadly mass shooting by one gunman in the Pulse nightclub in Orlando, Florida, there were discussions of adding security that sounded more like France. It’s worth noting from the Paris experience that this changes the lived experience of a city, the costs and benefits of which are difficult to weigh but important not to ignore.