Not the Kind of Ground Breaking Pittsburgh Is Looking For 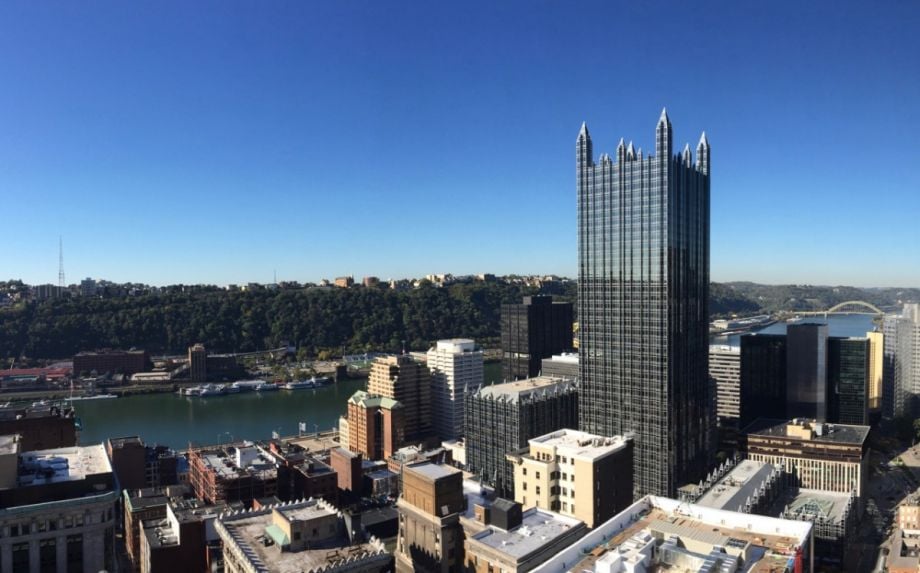 A view from downtown Pittsburgh, with Mount Washington in the background. (Photo by Oscar Perry Abello)

By last April, according to a report from WESA, the city of Pittsburgh had already spent five times more money on cleaning up landslides than it had budgeted for the entire year.​

In one week in February, more than a dozen landslides struck the city, forcing people to evacuate and destroying at least one home. In April, a massive landslide in the adjacent city of East Pittsburgh knocked out a portion of highly trafficked Route 30, keeping the road closed for months.

It was a record year for slope erosion in the area, and the primary culprit was water. Last year, Pittsburgh, which is already among the rainiest cities in the United States, saw nearly 58 inches of rain, as opposed to the typical 38 inches, according to the Pittsburgh Post-Gazette. And at a very basic level, excess water makes Pittsburgh’s already steep topography less stable.

“We already have geological conditions that put us at risk,” says Karina Ricks, director of the Department of Mobility and Infrastructure, which manages civil engineering work for the city’s public rights of way, street networks, trails, and certain waterways. The strata under the city include a layer of clay soil that Ricks describes as “very lovely and very slippery,” which means that dirt on the city’s many hillsides is already prone to slipping. Additional moisture makes that soil looser. As Ricks says, “When you add water, we end up with this [landslide] activity.”

This year, which is already getting off to a warm and wet start, the city is taking steps to improve its preparation. The budget line item for slope remediation last year was $2.5 million, according to Ricks. This year, it’s been raised to $6.8 million.

“Will that take care of everything? No,” she says. “Even with that large number, that still leaves unaddressed probably a half-dozen significant slides where we have had roads closed, and the roads will remain closed.”

In Pittsburgh, Ricks says, residents are fairly well attuned to the threat of landslides — so they will often tip the city off to areas where soil is in danger of starting to slip. In some cases, the city can intervene and create a small curb-like wall that prevents additional water from entering the soil.

“And sometimes that’s enough,” Ricks says. “You just keep the water out. The land settles back down, it dries out a bit, and it’s all good for the next millennium. Sometimes it’s not.”

So the city is trying to “get ahead of the prevention game,” which is cheaper and more effective than dealing with the damage of a landslide, Ricks says. That means making sure that slope stability is a primary consideration when it comes to zoning and permitting new construction. And it means enforcing existing rules, too: Ricks says that some landslides have occurred in areas where construction debris have been dumped at the top of steep hills, adding weight to the soil and causing it to slip.

The landslides have caused trouble for the Pittsburgh Water and Sewer Authority, too. Many of the city’s sewers were installed by hand inside slopes in ways that would be considered unsafe today, says Robert Weimar, executive director of the authority. In some instances, landslides have caused and been caused by water main breaks, and the Authority is trying to remove water infrastructure in some of the most volatile areas, Weimar says.

“The most important thing is to realize that we’re dealing with infrastructure that is a minimum of 75 to 100 years old, and as a result, we’re trying to, in essence, fix the plane while we’re flying it,” Weimar says. “The difficulty is we never know what piece is going to break.”

With many climate change-related threats, the harms often fall first and hardest on communities that are already vulnerable in other ways. But Ricks says that doesn’t seem to be the case with Pittsburgh’s landslides. In fact, she says, because the steepest slopes tend to have the most coveted views, landslides may be more likely in areas with high property values. For the most part, though, “land movement is completely agnostic to human economic conditions,” Ricks says. Ricks says there’s no reliable way to predict how bad landslides will be in the coming years — conditions could just as readily turn drought-like, she says—but she expects that climate change will present a range of challenges for cities like Pittsburgh to respond to.

“Climate change is real and Pittsburgh for its part is doing all that it can to address and mitigate the effects of climate change,” Ricks says. “This may be the new normal that we need to prepare for.”

Although the increase in landslides has caused damage to streets, infrastructure, and private property, and the city is gearing up for more, Ricks sees a silver lining.

“It’s somewhat good that this happened now because in my opinion Pittsburgh really is on the precipice of rapid growth,” she says. “We are very much a rising city, and so this has given us a refreshed and heightened awareness of where that growth is good.

And it’s a reminder, she says, not to be “seduced” by building in some of the more volatile parts of the landscape.

“This really sets us on a path to grow responsibility,” Ricks says.