Feeding Cities: Hunger in the U.S. Not Just About Food Distribution – Next City

Feeding Cities: Hunger in the U.S. Not Just About Food Distribution 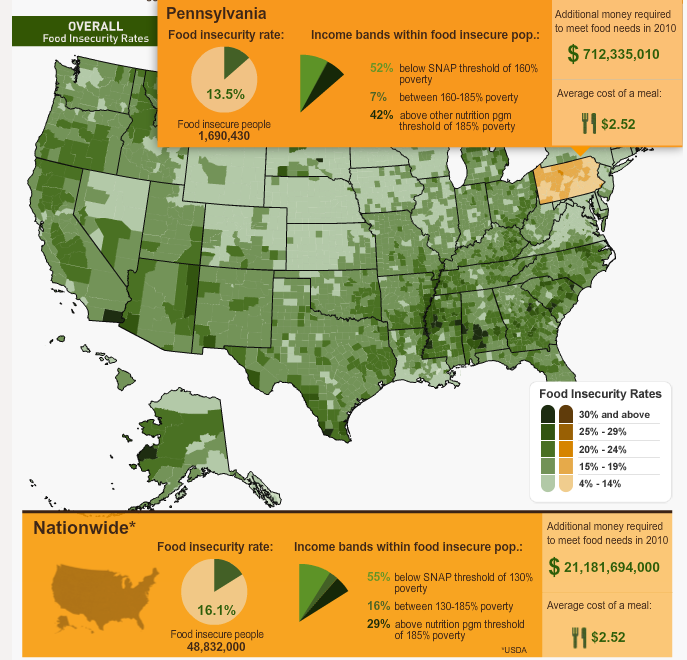 We’ve heard a little about slum-dwellers and the billion hungry people around the world. But we’ve heard less about the millions of hungry here in the U.S., and the need for culturally appropriate solutions that end hunger indefinitely.

As many as 50 million Americans are food insecure. In fact, Feeding America, a national network of food banks, is the fourth-largest non-profit in the country. With 600,000 local food pantry members, the organization deals with the immediate needs of hungry people, signing them up for food stamps so that they have supplemental income to purchase food for themselves. Thanks to this sort of outreach, 46.6 million people who needed them were able to use food stamps last year.

Over the last 15 years, the conversation about food insecurity has shifted away from dealing with immediate hunger, turning instead to the built environment and access to food. It has given rise to a national interest in “food deserts,” or areas without a nearby large grocery store that sells fresh food. But for all the media coverage devoted to food deserts, the fact that one-sixth of the U.S. population needed food stamps to supplement its income last year is more indicative of income inequality in a broken system than of merely unequal access.

Yes, we all need access to fresh, healthy, culturally appropriate, affordable food. We also need to be able to produce or procure that food from culturally appropriate sources: Amy Hillier’s study on shopping habits in Chester, Pa. proved that distance is only one of the factors determining why people shop where they shop: Price, quality, product availability and user experience have just as much influence on a consumer’s decision.

During this afternoon’s session, one audience member made an observation: “As long as we talk about food deserts as lack of access to supermarkets, then supermarkets are the only solution.” If supermarkets — the Walmarts and Food4Less’s and PakNSaves of the world — aren’t the solution, what is?

If you don’t have any income, you still need money to eat, so jobs are important. Many will look at the 46.6 million number and assume that this is an anomaly, a symptom of high unemployment rate. Yes, food stamp usage rates have soared during the recent recession, but there was hunger before that, and there will be hunger after.

It’s Not Just About Jobs, It’s About Just Jobs

The current minimum wage pays only $15,000 per year, which is $3,000 below the poverty level for a family of three. This leaves families food insecure and dependent on food assistance programs (food system workers themselves are 1.5 times more likely to use public assistance than the rest of the workforce, as seven of the 10 worst-paying jobs in the U.S. are food systems jobs.)

Last week, senators Tom Harkin and George Miller introduced the Fair Minimum Wage Act, which would boost the minimum wage to $21,000, lifting families above the poverty line. If passed, the bill will mandate a raise for more than 30 million American workers, including 17 million adult women.

But as Eric Olson of Feeding America noted, “the national policy system is broken, but we can change things on a community level.”

PhilAbundance, one member of Feeding America, is experimenting with a new model of grocery store in Chester. Fare and Square will provide a tailored user experience, cutting costs through scale and its unique position as a non-profit. The goal is to recruit 10,000 members and be accessible to WIC and food stamp users. Amy Hillier and her team will help study its efficacy.

I didn’t hear a lot about ownership or ways to end hunger through income generation, so I asked Olsen and Bruce Clark of PhilAbundance about the role of their organizations in addressing jobs, wages and wealth generation in their work. Clark affirmed that Fare & Square’s economic development grants stipulate that it must create jobs and hire locally, and that it would implement a job training program to help achieve that goal. The model might be replicable and scalable for other food banks, and perhaps Feeding America’s 600,000 members will engage in dialogue and advocacy to raise wages as a menas of ending hunger.